1. Weekly Market Update:  Under Pressure…Anyone who was hoping for a quiet end to an otherwise positive week for the markets was disappointed when China announced new tariffs on the US this morning. After the tariff announcement, US Fed Reserve Chairman Powell gave his long awaited Jackson-Hole speech. Then, as we expected, Trump responded to China's trade war escalation with a barrage of tweets and ordered "Our great American companies... to immediately start looking for an alternative to China, including bringing your companies HOME and making your products in the USA. " Markets found it difficult to take this all in stride and a sell-off followed that erased the week’s gains. On the week, US stocks lost about 1.5% while International stocks fared a bit better. Bonds had modest gains. Below we take a deeper dive into the action and look ahead into next week.

2. Trade Escalation: This Morning China announced new tariffs in the range of 5-10% on some imported goods including oil and soybeans. China said these are counter measures to recent US moves.

3. Powell’s Jackson Hole Speech (this morning) came in largely as expected. He cited a robust US economy that is producing good jobs with rising wages for workers and noted that US consumers are responding with higher spending habits. He noted that the Fed’s challenge is to now sustain the economic expansion in a lower inflation environment. He then assured that the Fed can adjust policy for trade issues.  All of this rhetoric was market friendly and in line with expectations.

4. The Inverted Yield Curve Continues to be a Big Focus: Due in part to trade war uncertainty, a low long term inflation outlook and a relatively strong US economy some bond yields have dropped to new lows while others have remained relatively high. The closely watched 10-year/2-year part of the yield curve (see chart below) has flirted with an inversion of the normal status (Inversion = when the 2-year yield rises above the 10-year yield). Since inverted yield curves have reliably signaled upcoming economic downturns in the past, the cause for concern has been high. Attention is now going to focus on the next Federal Reserve meeting in September.  A cut in rates from the Fed would decrease short term yields and likely nullify any inversion to the yield curve. Expectations for a Fed rate cut are elevated.

5. Is an Inverted Yield Curve Bad for Stocks Short Term? Maybe Not. Since the 1950s, stocks kept rising after all but one of the yield curve inversions (see chart below from Bloomberg). The S&P 500 gained an average of 21% over 19 months after an inversion (and before peaking). The hand wringing among stock investors over an inverted yield curve is perhaps a bit overblown, if history is any guide. Inversions have occurred seven times since the early 1950s and in only one case did equities not gain in value. 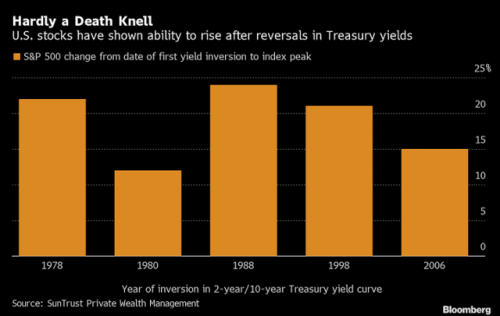 6. Taxes and the Campaign Trail: This week we heard some sharply conflicting views on taxes from Democrats and Republicans.  Tax policy can highly affect corporate cash flows, stock valuations and the economy so this topic will be a significant focus as elections draw near.  Current Democratic front runner Biden said on Wednesday, in an interview with Iowa Public Television: “I believe…the capital gains tax should be at what the highest minimum tax should be, we should raise the tax back to 39.6 percent instead of 20 percent. ” Biden's long Senate voting record on this issue indicates that voters should highly expect him to push for capital gains tax hikes if elected. Currently, long-term capital gains are taxed at zero percent, 15 percent, or 20 percent, depending on income level. In contrast, the Trump Administration announced this week that it is working on Tax Cuts 2.0 for the campaign trail. The Republican plan looks to include a payroll tax cut and potentially another form of a capital gains tax cut.

7. Looking Ahead to Next Week...Some items to watch are:  The G-7 Summit- expect the European economy and hard Brexit to be topics of conversation. Also, watch for any escalation or easing in Hong Kong protests now that students are getting back to school. Next week will also bring a lot of trade war chatter after today’s escalation. The yield curve will get continued attention and there is a slew of important economic data out next week highlighted by Durable Goods on Monday, Consumer Confidence on Tuesday and Core Inflation and Consumer Spending stats on Friday.  Should be an interesting, news filled week!

• Why Is Joe Rogan So Popular? (The Atlantic) – Katie

• A President at War With His Fed Chief, 5 Decades Before Trump (New York Times) – Deirdre

• What if Aging Weren’t Inevitable, but a Curable Disease? (MIT Tech) - Deirdre