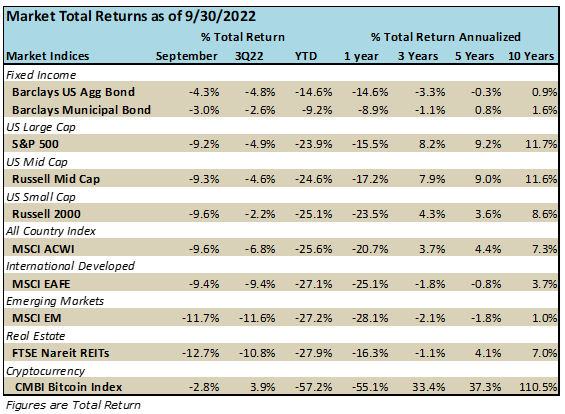 Equity markets already had the worst first half start in over 50 years, and after a late summer rebound, the S&P 500 found a new low by quarter-end. During the quarter, markets looked to the Fed’s harsher stance on combatting inflation and got less optimistic about a Fed rate pause and achieving a soft economic landing.  The Fed has repeatedly said it will be data-dependent with regards to rates and unfortunately, we have not seen (as of this date) enough decline in inflationary pressures (CPI or PCE) that would warrant the Fed to move off its current path of tightening above neutral (i.e. moving the Fed Funds rate above 2.5% level).   At the August gathering of the Fed presidents in Jackson Hole, Chairman Powell even went as far to say “households and businesses may feel pain as a result of rate hikes.”

As you can see from the chart below, while earnings growth is still positive this year, stocks in the S&P 500 have retreated mostly due to multiple compression.  The price-to-earnings ratio (P/E) that investors are currently willing to pay for stocks in a rising rate environment and threat of a recessions have come down drastically this year, with the majority of that decline in the first six months.  While it’s fundamentally good to have valuations below peak levels, it comes with a price…negative returns. 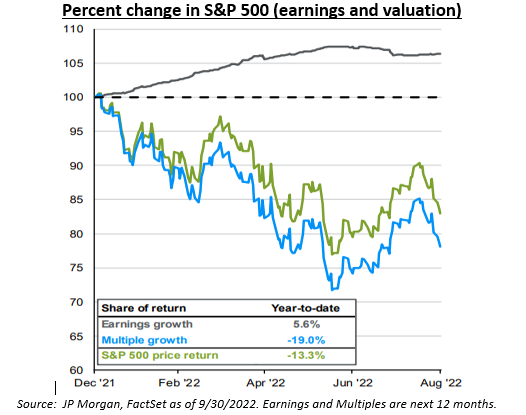 Looking at quarterly returns from a sector perspective, all sectors except energy and consumer discretionary posted negative quarterly results. The widest dispersion in sectors through nine months is between energy up 34.9% YTD and the struggling sectors of communication services and technology, down -39.0% and -31.4% YTD, respectively. Growth stocks tend to include many low or non-earners and are therefore greatly impacted by changes in the discount rate rather than changes in earnings forecast. While first half valuations were impacted mostly by rising rate expectations, the most recent quarter can attribute some of the decline to lowered earnings expectations. According to the S&P 500 value and growth indexes, the value style outperformed growth by about 14% YTD, but Q3 contributed a small 2% difference. 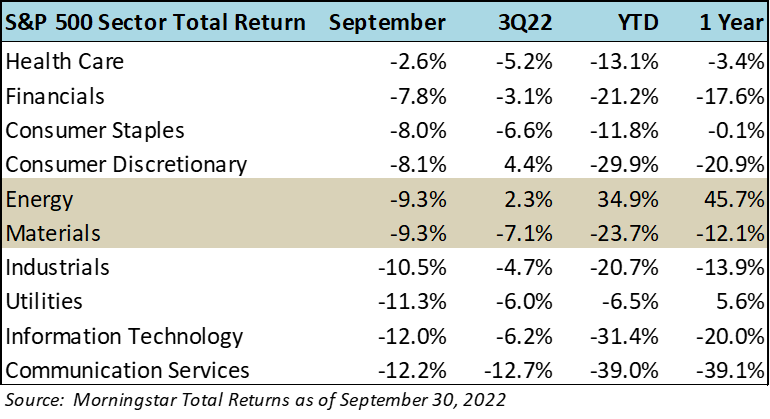 Looking at the year-to-date returns, seven of the ten economic sectors are down 20% or more.  It’s been a rough ride in 2022, but we have to remember that this was coming off a base of above average returns for multiple years in a row.   At year end 2021, the S&P 500 had an average return over ten years of 16.6% per year and a five year average of 18.5%!  Most economists and strategists use around an 8.0% rate of return for the long-run S&P 500 growth rate.  The market has been growing above average for a long period of time because of low interest rates, global stability, high production and low inflation. None of these factors exist to the same extent today and we have to recognize that some of them may not exist for the foreseeable future.   Getting used to “normal” market returns of single-digit growth will likely be necessary.  Conservatively, we have always used lower market return assumptions for our financial planning purposes and will continue to do so.

In our written piece at the conclusion of June, we wrote about the Fed raising rates by 0.75% (largest since 1994) and expected shrinking rate hikes through the end of 2022. Throughout the month of September however, Fed officials emphasized continued tightening and consequently hiked rates 0.75% a third consecutive time. For perspective, we were at a range of 0.00-0.25% in January and today the Fed Funds rate is 3.00-3.25%.

Can the Fed orchestrate a soft landing?  Can they raise rates just enough to slow growth and reduce inflation without moving the economy into a recession? While certainly a possibility, it becomes more challenging if the Fed continues to hike at the 0.75% level.   There are two more chances in 2022 for Fed hikes on November 2nd and December 14th.  Markets currently have factored in a greater than 50% probablity of a fourth 0.75% hike in November, pushing the Fed Funds rate to 4.0%.  The effects of these hikes are beginning to be felt across the economy. We still have a lot of economic data for the Fed to analyze and react to before the next meeting, and the markets will likely swing on each and every data point so volatility is here to stay. The runway for a soft landing may have shortened, but it’s not gone, in our view. To a degree, Powell’s setting of expectations could help the effort to reduce inflation and markets tend to agree that elevated inflation is more dangerous than pushing the economy into a mild recession.

Interest rates continued higher in September thanks to the Fed resulting in another difficult quarter for fixed income.  The good news is that yields are higher and getting to a place we have not seen in quiet some time.  The tax-equivalent yield on a municipal bond is nearly 5.0% today!  That’s real income as opposed to recent history.  Below is a chart showing the big move in municipal yields from last year through September. 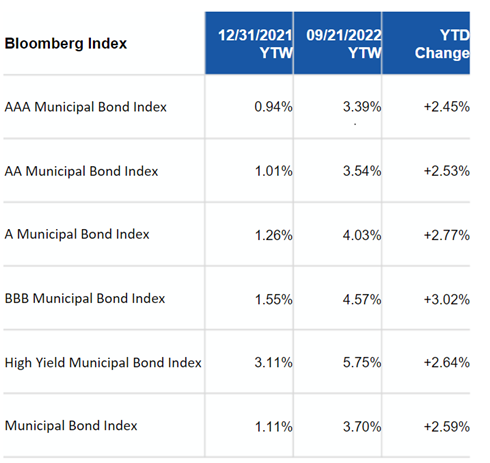 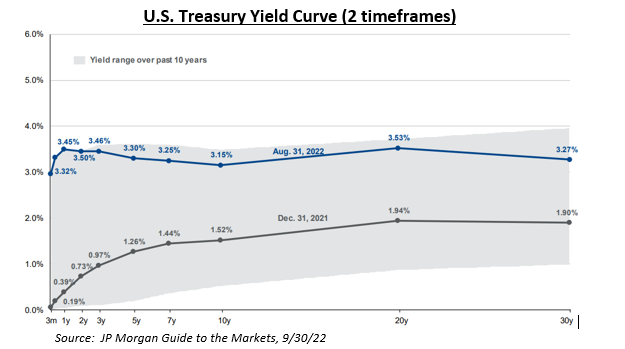 As the market began to realize that the Fed would likely have to do more rate hikes than were expected, the short end of the curve rose dramatically while the long end of the curve did not. The yield curve has been inverted (short term rates higher than long-term rates) since the beginning of the quarter and is still inverted by a spread of nearly 0.50%. 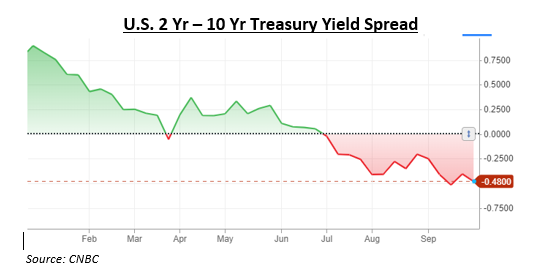 This inverted yield curve could be a warning sign that the economy is approaching a recession in the near future as these inversions historically have been an indicator of recessions. The 2-year treasury yields rising above the 10 year yields reflects a more negative outlook of future growth.  Another way to think of this yield curve signal is to apply what it means for a bank. The yield curve spread represents the difference between a bank’s cost of money (short term rate) and the revenue it will make by lending/investing it over a long time horizon (longer term rate). When banks make less (or lose) money providing loans, lending production slows and so does economic activity.

As we noted in our other article this quarter, cash is no longer trash!   The yields on money market funds have been improving through the year as the Fed raises rates.  Today a money market account at one of our custodians, with a cash balance of $100,000 or more is earning 2.97%.  Sandy Cove was proactive in moving clients into the highest yielding money market account available.  Again, a pretty good return in the face of declining stock and bond prices.   Please read more on on this topic by linking to the article here.

The refinance boom allowed many homeowners to reduce the debt cost on their homes for the past few years. This wave of refinancing has come to a sharp halt as mortgage rates have spiked back up to 2019 levels. The chart below shows the path of the 30-year fixed mortgage rate from December 2018 through March 2022. Since April, the 30-year rate has exceeded 5.0% and continued to 6.7%. This will likely have a cooling impact on the housing market over time and contribute to falling inflation data in coming months. This rise is truly remarkable when we were all comfortable with 2-3% refinancing rates just nine months ago! 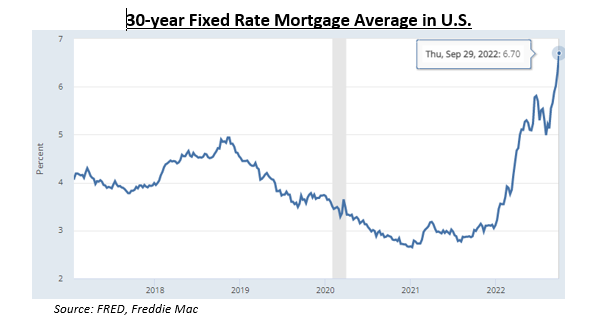 During the third quarter, Sandy Cove Advisors made more tactical allocation shifts. These changes were designed to protect portfolios from what we believe will be continued challenges in global markets.  As a reminder, in the first half of the year we made tactical allocation shifts which lowered international equity weightings, lowered duration in applicable fixed income allocations, exited from an inflation response fund, and increased cash positioning.  After our Investment Committee meeting in mid-September, we decided to take additional action to protect portfolios by again raising our cash position and lowering our international equity weighting.

With continued concerns of geopolitical tensions, war, and global inflation, and a likely energy crisis in Europe,  our team made the decision to trim international developed positions even further this quarter. We had already removed dedicated emerging markets funds in 2020, so the international exposure remains largely in developed economies.  Looking back two years, we had a healthy 30% weighting in international developed equities in an all equity portfolio.   Today, we stand at just 15% exposure.

Geopolitical risks have been of great concern with the Russia-Ukraine conflict at the forefront. We are still concerned about the economic fall-out from the war on the health of the European economy given higher energy cost inputs. What is clear to us at this point, is that Putin is bracing for a long-term invastion which has negative ramifications for everything.

LOOKING TO THE FINAL QUARTER

Pessimism generally does not survive the long game in financial markets and timing the markets hurts more often than it helps. We need to see some results from the Fed’s tightening course and recent inflation data has been  somewhat encouraging.  The chart below shows that we are coming down from a peak and we suspect that trend will continue as the Fed’s three 0.75% hikes in a row will take more effect in coming months.

We are entering third quarter corporate earnings season where all public companies will provide guidance on their earnings growth for the remainder of this year and into 2023.   We expect this news will be negative and likely result in reduced earning expectations across the board.   Once the markets can digest this, we should be closer to the bottom of market sentiment and look for ways to get constructive again on equities and put our excess cash to work. 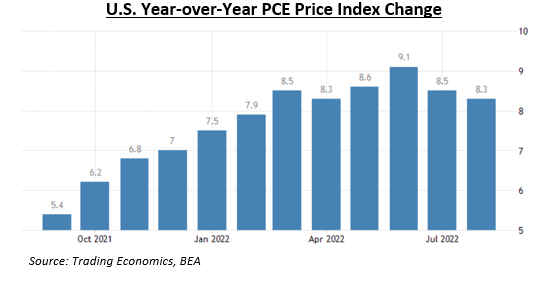 We are confident that we will get to a point where fundamentals will turn positive and our high cash allocations will be a thing of the past, until then, please know we are taking constructive actions to limit the downside in portfolios, while also keeping the long-term perspective that we want our clients to stay invested and not try to time the markets.  As always, your team at Sandy Cove Advisors is here to discuss market and portfolio matters with you. We are more than happy to have discussions with our clients, please do not hesitate to contact us.