1. Market Update: The Streak Continues! Stocks are up 10% since Christmas Eve, the biggest 10 day gain in a decade. The move lifts both the S&P 500 and the Dow Jones Industrial Average out of correction territory, leaving them less than 10% below the indexes’ previous peaks. The trend is undeniable but the rally is still very young and very fragile. Areas of concern going forward: The Fed and Interest Rates (Green Light –for now), Trade War (Yellow Light- Improving), Earnings (Yellow Light –Blinking), Valuations (Yellow Light, Until we are past earnings season). US Small caps and Mid Caps led the charge this week advancing more than 4%. Most major averages were up 2-3%.

2. The Fed & Interest Rates: Adding fuel to this week’s rally was a chorus of dovish and helpful comments from Federal Reserve Board Chairman (Jerome Powell) and several of his Regional Fed Presidents. All Fed speakers backed off significantly from Powell’s hawkish higher interest rate comments that helped to send the market into a tailspin in late December.  Giving additional comfort to the markets was today’s Consumer Price Index report (a broad measure of inflation) which came in below expectations. This interest rate friendly and Fed friendly number will allow the Fed to feel comfortable about not raising rates in the short term. The importance of the Fed’s focus on inflation cannot be understated. Ultimately, as long as inflation remains muted, the Fed can remain flexible and patient about the pace of rate moves. 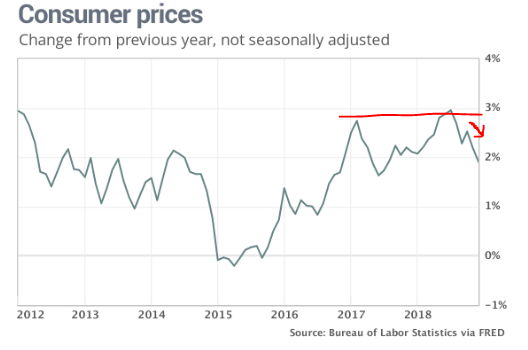 3. Trade War: Negative rhetoric has significantly died down as negotiations between the world’s two largest economies got off to a good start, with Chinese Vice Premier Liu unexpectedly attending what was meant to be a discussion between lower-ranking officials. Talks were extended to a third day and progress was rumored to have been made on energy and agriculture. The next meeting of higher-level talks between U.S. Trade Rep. Robert Lighthizer and Vice Premier Liu is expected to happen later this month. Both sides face a resumption of tariffs in March if no deal is reached.

4. Earnings Season: This is the most important earnings season in recent memory. Ultimately earnings are the main determinant of stock prices and we have seen a series of high profile companies lowering expectations (Apple, American Air, Macys- just to name a few).  Those warnings, which started in late November and continued through December, help explain the dramatic selloff we experienced. Fourth quarter earnings expectations have come down about 6% since October and are now believed to be in the 12% growth range. More importantly, beginning next week, corporate executives will be discussing business activity in the current quarter, which is expected to see slower profit growth. First-quarter 2019 earnings are expected to be up around 3.9 percent, according to Thomson Reuters. The big banks will kick off earnings season and JPMorgan will give us a sense of how strong lending and financing activity is across the world. JP Morgan CEO Jamie Dimon said recently that the economy is healthier than everyone thinks and rumors of a recession were premature.

5. Valuations: What’s the right level for the market?  When the market recently bottomed at the 2,350 level on the S&P 500, buyers made a statement. There was buying in force at this level by large institutions such as pensions, endowments, insurance companies, hedge funds and asset managers.  At this level, stocks were trading at close to 14 times earnings, below there long term average price/earnings ratio of 16. There seems to be a good level of buyer support just below current levels. While the downside may be somewhat limited from a risk/reward perspective, future earnings will dictate the level of upside action that stocks will see…another reason we are keenly focused on next week’s corporate projections. 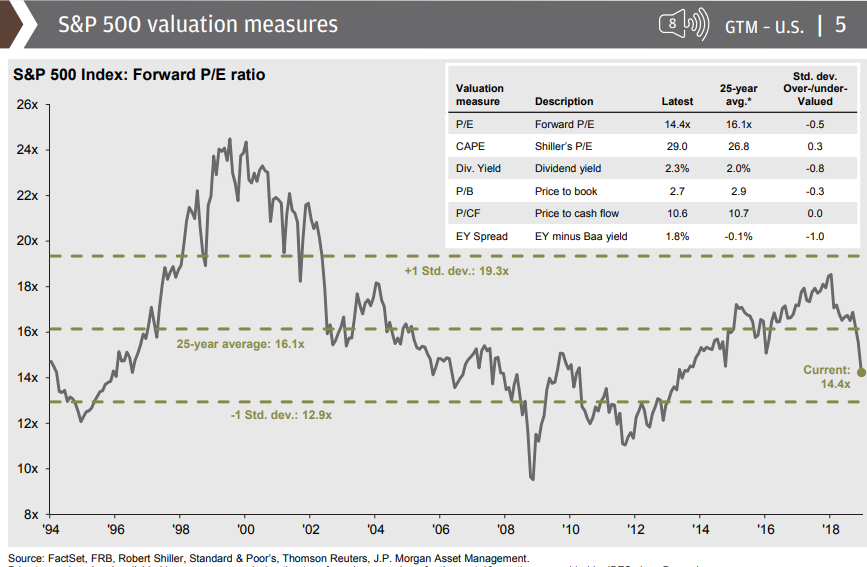 6. Mexican Standoff / Government Shutdown: 800,000 workers did not get paid today but the House voted Friday to pay them once the government opens again.  Both sides remain far apart. Costs related to the funding curtailment, now in place since Dec. 22, are rising with businesses losing an estimated $200 million a day in missing or delayed revenue. The President seems increasingly likely to declare a national emergency that would allocate funds for a border wall by diktat. The prolonged shutdown hasn’t affected the stock market much this time. In fact, with a 8% gain over the past 20 days, the S&P 500 has had the best performance during a government shutdown since at least 1976. The index has gained in each of the past three closures, two in 1995 and one in 2013.

7. Tax Hike Chatter: An item that may very well affect the value of assets in the future is a potentially changing tax code. In an interview with 60 Minutes, incoming House Democrat Alexandria Ocasio-Cortez called for a top marginal tax rate of 60-70%. This statement has drawn predictable scorn from mainstream Republicans, looking to use this moment as a chance to argue that Democrats are the party of tax hikes. Nothing policy-wise is likely to change anytime soon... but it's clear that when it comes to fiscal policy, the terms of debate are starting to widen, and more and more politicians are likely to come out for both aggressively higher taxes on the rich, as well as spending plans that unapologetically widen the deficit. It will be fascinating to see how this translates to the Democratic primary and, eventually perhaps, to actual policy.