We finally have a blueprint from Congress demonstrating how they plan to pay for the proposed $3.5 trillion infrastructure bill. The House bill is larger than the $1.0 trillion Senate bill, and includes human infrastructure components such as national paid-leave programs and expanded Medicare.  With a self-imposed deadline of September 27th for bill passage, the pay-fors seem less onerous than the ones originally floated by the Biden administration.    The House Ways & Means Committee released proposed tax changes on Monday September 13th.

House Democrats will need every one of their party’s votes to pass this legislation.  Many of the more controversial tax proposals, like the elimination of step-up in basis at death, have been scrapped in this new version.  Below is a table outlining the current policy, the proposed House rates, and Biden’s initial proposal. 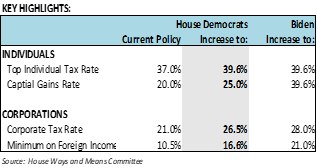 As you can see from the table above, all proposals are higher than current rates, but not as high as the administration first floated.   In addition, there are some items worth noting that were added to the bill, and some that were removed.  A few of these are noted below.

What Is Not in the Bill:

What Is Added to the Bill:

Washington is starting from a slightly better negotiating point in terms of taxes, and Democrats are satisfied that they are delivering a bill that is in keeping with Biden’s goals:

No tax increase on households making less than $400,000 per year and

Negotiations may still occur and the final pay-fors are yet unknown, but we now have a framework that is