1. Weekly Market Update: Stocks gave up some good ground this week. Given this year’s big run up in equity prices, markets we’re a bit overdue for a pullback. The main reason for this week’s sell off was the escalation in trade tensions between the US and China. President Trump, as promised, boosted tariffs on $200 billion of Chinese exports to 25% early Friday morning after a rocky week of trade talks. This week, major US equity indexes declined by about 2.5% and international stocks were hit harder, declining 3-5%. Both taxable and tax free bonds had respectable gains on the week. Below we consider trade & geo-political flare ups, boring inflation, wrong way investor sentiment and surprising earnings.

2. Trade Tensions were the huge item of focus this week and will be again next week. We had warned, in this space last week, that a too optimistic outlook on negotiations had taken hold in the markets and the media. Friday morning at 12:01 am, DJT followed through on his warning to use tariffs as a tool to bring China closer to the finish line of a deal. Authorities in Beijing promised to retaliate, but their first step was to bolster their stock market as they directed state funds to buy Chinese stocks. The Shanghai Composite closed up 3.1% overnight on state buying.  Talks are still fluid and will be resumed next week. Potential headlines to look out for: a devaluation of the Yuan by the Chinese government, halting the purchase of US soybeans and perhaps a decision to sell US Treasuries. Headlines have been up and down, perhaps good news next week follows this week’s bad news. Tweets were positive on Friday afternoon…and so it goes.

3. Jamie Dimon to the Rescue:

All is not lost on the trade front when the world’s most prominent banker strikes an optimistic tone. JPMorgan Chase CEO Jamie Dimon puts the odds of a trade deal at 80%. He's probably a lot closer to the situation than we are, so let's hope he's right. Dimon was speaking at the bank's China summit in Beijing this week - so he's physically (and mentally) closer to the situation.

4. Economy: The big items of the week on the economic front were inflation reports on the US economy. Both the Consumer Price Index (CPI) and the Producer Price Index (PPI) gave us inflation readings that were barely at the 2% level. Low inflation is persisting in both consumer and producer prices which will keep interest rates low as far as the Federal Reserve is concerned. A growing chorus of market participants, along with President Trump, are citing concerns that low inflation is the precursor to dangerous deflation. These voices are calling for a cut in rates as pre-emptive medicine to keep the US economy rolling. Germany’s Economic Outlook Cut: Last week we had encouraging signs of Euro economic growth, this week, not so much. The EU is now forecasting that Germany will only grow 0.5% this year, down from its prior forecast of 1.1% growth. The culprit...China. While Germany's GDP is also heavily influenced by domestic consumption and exports to the U.S. and Europe, China is one of its biggest customers buying nearly $100 billion in vehicles, machinery and heavy industrial products.

5. Earning Relief: It does appear that the much talked about Q1 earnings recession has been called off. According to Credit Suisse, through Thursday, 88.0% of the S&P 500's market cap has reported 1Q. Earnings are beating expectations by 6.7%, and 73% of companies have exceeded their earnings estimates. This compares to 5.4% and 71% over the past 3 years.

6. Geopolitical Tensions to Watch: Iran has threatened to pull out of the 2015 Nuclear Accord as EU leaders are scrambling to keep some semblance of a deal together. Iran is under pressure as US sanctions have increased as oil export waivers have now expired. The US is sending an aircraft carrier to the Middle East in what National Security Advisor John Bolton said was a “clear and unmistakable message to the Iranian regime that any attack on United States interests, or on those of our allies, will be met with unrelenting force.”  North Korea is making noise again with missile firings. Many strategists believe North Korea doesn’t do anything without China’s signoff.  Are the missile tests are back because of the trade pressure Trump is putting on Beijing to squeeze them into a recession?

7. US Fund Flows - Sell equities, Buy bonds:  The chart of US fund flows tells an interesting story of investors piling into bonds and dumping equities. This is interesting because this comes precisely during a period where equities outperformed bonds. The picture painted here is one of risk aversion. Markets do not typically top when investors are cautious but rather when they are quite optimistic. 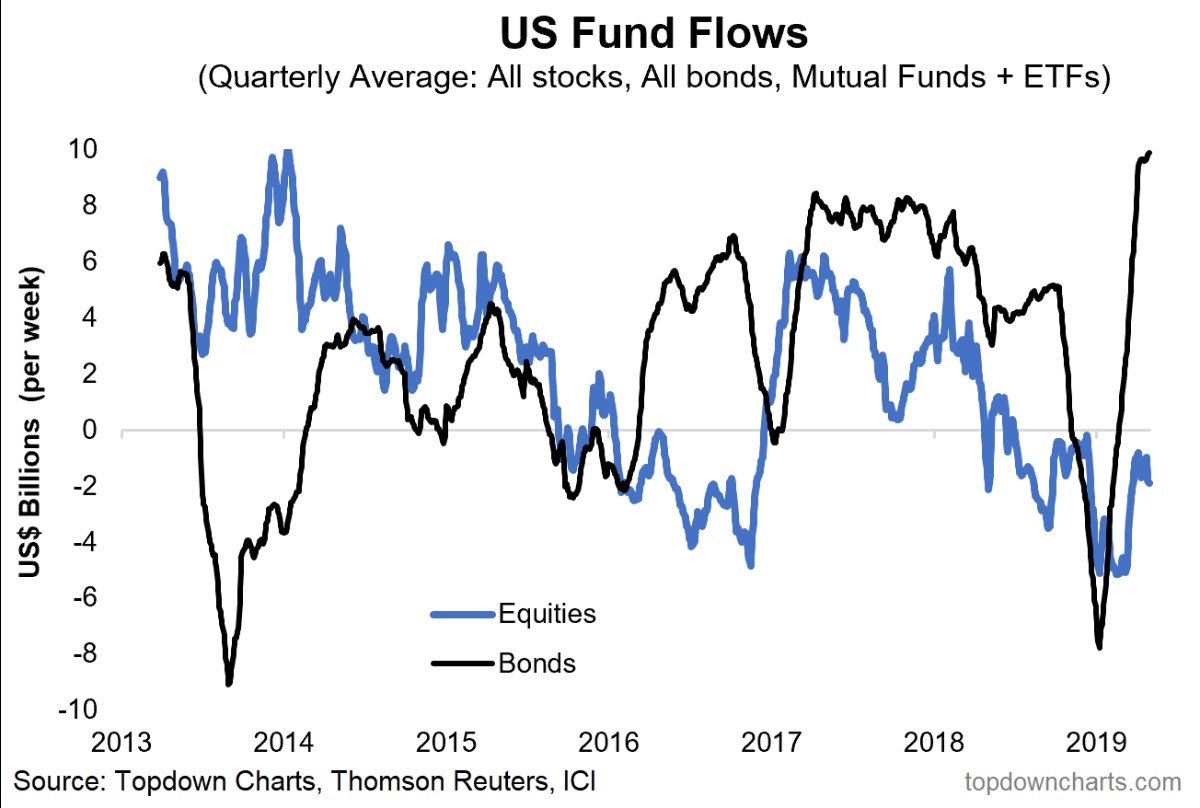