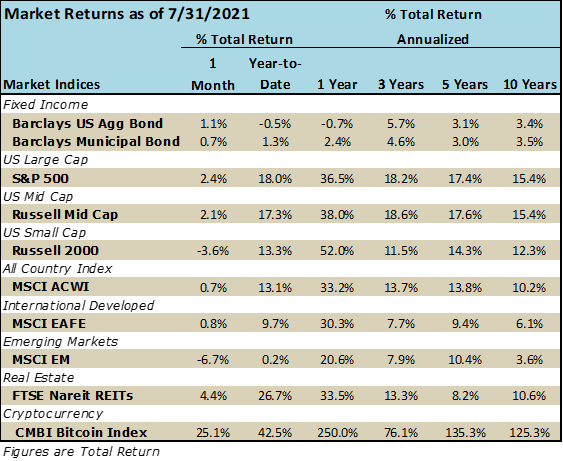 JULY EQUITY MARKETS:  The broad market notched another positive leg up in July with most major indices up for the month.  As the equity market saw the treasury bond yield curve flatten, the financial sector took a breather, but the lower yield allowed growth stocks like healthcare and technology to have a good month.  Healthcare stocks in the S&P 500 were the best performing sector, rising 4.9% in July.   As you can see from the table below, growth as measured by the Top 100 Nasdaq listed stocks (QQQ) began to outperform the broader S&P 500 about 3 months ago as bond yields started to head south.  Growth style stocks came into favor and financial and energy, two main value style sectors, fell.  That same trend continued through July.

After a huge first quarter, energy stocks cooled off in July falling -8.3%.   Staying in the U.S., the other laggard was the small cap space, which likely saw some profit-taking after a 52% 12-month return.

Most developed international equities were fairly flat for the month.  They have not been able to yet attain the same “reopening” traction as U.S. counterparts, due mostly to low vaccination rates.  The biggest slide in monthly performance came from the emerging markets which fell -6.7% during the month.  There were two detractors affecting those markets.  First, the delta variant of COVID-19 has created healthcare epidemics in EM countries such as Brazil, India, and Indonesia where focus was on saving lives, not the stock markets.  Second, we witnessed a number of sweeping changes by the Chinese government restricting areas of technology and education.  As you may recall, Sandy Cove made a concerted effort in 2020 to remove most funds focusing on emerging markets only in favor of international funds that may or may not have some exposure to emerging markets.  This asset allocation shift has had a positive impact on performance as the emerging market index is flat year-to-date compared to a 13.1% return in the All-Country World Index (ACWI).

The Dow Jones Industrial Average had what one could only call a short, mini-pullback mid-month and we feel the chart below really tells the story about how equity markets want to grind higher.  There was a 2-day time-period where equities were a bit worried and pulled back, only to be brought right back to levels seen the week before (and then eventual new record highs on the 26th).  With so much federal stimulus and consumer savings (cash on hand), we think it has made these pullbacks shallow and short-lived. We always like to buy on dips, but we expect them to last for more than 14 trading hours!

To summarize, U.S. large and mid-cap equities had another strong month and sentiment reflected the continued re-opening trade, strong economic growth, and improved employment picture.  As you will read in the bond market review below, the same cannot be said for that market’s view on the world.

JULY BOND MARKETS:   The yield curve flattened again during July and we saw the 10 year treasury yield fall below 1.30% for the first time since February of this year.  The bond market is signaling something different from the stock market at this point in the economic cycle and looking at the glass half empty.  The bond market has focused on the underwhelming economic data, escalating spread of the COVID-19 variant, assumption that global growth is peaking/slowing, and worry that the Federal Reserve continues to add stimulus to an already recovered economy.  The one thing the bond market was not worried about, clearly, is inflation and seems to be in the Fed’s camp that it is transitory in nature.

With yields falling that means prices of bonds were rising and that helped pull the Barclays Aggregate Bond benchmark almost to a break-even return for the year versus the first quarter return of -3.4%.

Favorable dynamics in the municipal market should remain in place in coming months.  Demand for munis continues to be robust, federal stimulus is coming to aid of many municipalities, and a better economy means higher tax receipts. 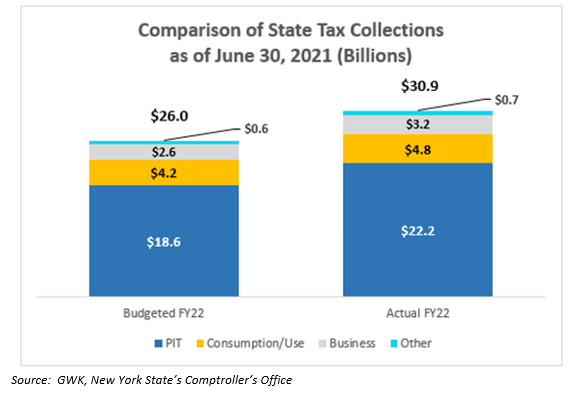 ECONOMY:  We highlight a few economic indicators in July that overall were a mix of both strong and weak.

We believe the GDP figure for second quarter was not as strong as expected due to low inventories and supply chain issues.  As those abate, we expect the pull-through in sales to help push third quarter GDP up nicely.  Consumer prices reported in June once again showed inflationary pressure.  The table below lists some of the biggest year-over-year price moves of some of the components of CPI:

GOVERNMENT ACTION:   The infrastructure bill got resuscitated in Washington with bi-partisan support seemingly at hand for the time being.  The Senate is likely to send a $1 trillion infrastructure bill to the House the second week of August, assuming it can get through the amendment process this week.   The House has a much higher price-tag of $3.5 trillion for its infrastructure package.  How those two bills get reconciled (or not) is anyone’s guess at this point, so we’ll leave the speculation to others. Those competing bills will not get much debate until the House returns from recess in mid-September.

COVID-19 UPDATE:  As of August 2, the U.S. has hit its milestone of 70% eligible Americans getting vaccinated.  That’s the good news.  The bad news is that the Delta variant is the dominant new strain in the U.S. and is much more contagious.  With COVID-19 cases spiking again in the south, mainly Florida, Texas, Louisiana, and Mississippi.  The majority of hospitalizations are unvaccinated patients.  Thankfully, others are taking this new COVID-19 wave seriously and those states just mentioned are seeing a big uptick in vaccinations in the last seven days, according to the CDC. 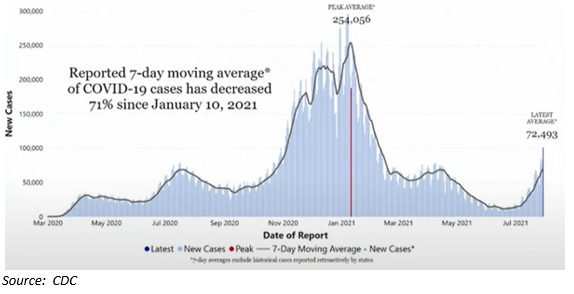 With some truly summer weather at hand, we hope you are reading this on a beach somewhere!  Enjoy August and the sunshine we finally have at hand.  As always, we welcome your comments.