The S&P 500 posted its best January (+8.0%) since 1987, while the Dow Jones Industrial Average closed the month with its best gain (7.4%) since 1989. Most asset classes followed suit with a strong week and month.  Continuing to lead the charge this week were Small-Caps +1.25%, Mid-Caps +2.02% and Emerging Markets stocks +1.33%. For the month those asset classes are up 11.41%, 11.10% and 9.47% respectively. Bonds closed slightly higher on the week by .22%.  The short story: Good earnings follow through, accommodative comments from the Fed and a lack of negative headlines pertaining to trade and the government shutdown.

2. Fed About Face: The biggest market moving news this week was a severe revision in the Fed’s stance on raising interest rates and deleveraging its balance sheet. Wednesday’s about face sent markets ripping. As the chart below highlights, when the Fed’s balance sheet is shrinking, asset values (S&P 500) can decline as money flows out of the financial system.  As one market seer put it: “OMG guys the Fed is, like...a really good boyfriend or girlfriend. So accommodating all of a sudden, so attentive, and affirming and validating.” What happened to last October's rhetoric about the Fed Funds rate being 'far from neutral', and the deleveraging of the Fed's balance sheet on 'autopilot'?  Wednesday's comments nullified those prior statements. These were the magic words that lit a fire under stocks around 2:15 pm ET (Wednesday):"...In light of global economic and financial developments and muted inflation pressures, the Committee will be patient as it determines what future adjustments to the target range for the federal funds rate may be appropriate to support these outcomes."     "...The Committee is prepared to adjust any of the details for completing balance sheet normalization in light of economic and financial developments. Moreover, the Committee would be prepared to use its full range of tools, including altering the size and composition of its balance sheet, if future economic conditions were to warrant a more accommodative monetary policy than can be achieved solely by reducing the federal funds rate." 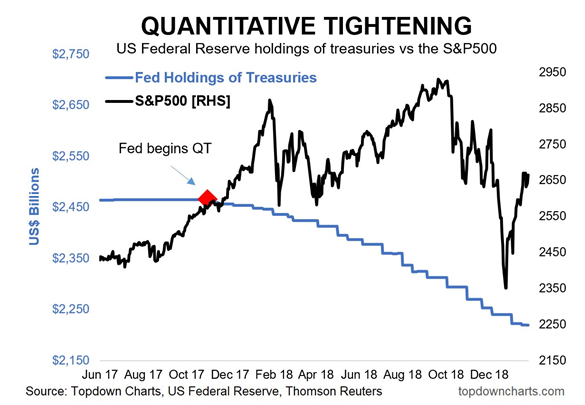 3. Earnings Engine:  Ultimately earnings are what drive long term equity values. A big part of the recent sell off had to do with fears of an “earnings recession.”  So far, the reports streaming in this week and last are indicating that earnings for 4Q 2018, while not gang busters, are quite solid. Credit Suisse had this tally as of Thursday morning: 37.8% of the S&P 500's market cap has reported 4Q. Earnings are beating by 2.0%, with 66% of companies exceeding their bottom-line estimates. This compares to 4.9% and 70% over the past 3 years. 4Q expectations are for revenues, earnings, and EPS growth of 5.5%, 10.8%, and 12.8%, respectively.

4. Trade: While both the U.S. and China cited progress at the high-level trade talks in Washington, they stopped short of announcing a breakthrough that would end the conflict. They agreed to strengthen cooperation on technology transfers and intellectual property rights, while China said it would buy more US goods.  Treasury Secretary Steven Mnuchin and U.S. Trade Representative Robert Lighthizer will visit Beijing in mid-February to hold the next round of talks ahead of the March 1 deadline for avoiding further tariffs. While a breakthrough was never expected at this point, investors will look to the concluding statement promised by the White House for progress on core issues such as intellectual property rights, market access and promises to buy more American goods.

5. Emerging Markets Consensus: Be wary when all the smartest guys and gals in the room  are saying the same thing.  A contrarian who goes against the crowd is often right. Our Investment Committee sat down on Monday to review our 10 year long Term Capital Markets Assumptions (LTCMAs) for input into our financial planning software. We were surprised at the universal long term bullishness for Emerging Markets stocks.  Typically we’ll survey the predictions of JP Morgan, Goldman, MFS, State Street, Blackrock, Callan, etc.  Everyone, and I mean everyone, feels emerging markets are the place to be for the long term (if you can stomach the volatility). Why? Much better GDP growth rates due to their younger populations that are in spending and saving modes. This week EM stocks charged ahead again and are up close to 10% so far this year. The dovish tone in the Fed's announcement Wednesday is also positive for EM stocks. Lower interest rates in the US is positive for emerging market economies because it should push the value of the US dollar down which keeps the pressure off of domestic emerging market currencies.

6. Economy:  So far, so good this week. This week’s jobs report (Non Farm Payrolls) stated that the US economy created 304,000 jobs in the latest period, well above the 170,000 estimate. The labor force participation rate also advanced to 63.2% which is the highest level since September of 2013. Average annual earnings also advanced .1% and are now running at a 3.2% annual rate. Wages have not seen this level of growth in over a decade.    The US economy continues to chug along at a healthy clip, and a recession for 2019 looks increasingly unlikely.

7. What to Watch Out for Next Week: US corporate earnings reports: So far earnings have been solid, a trend we’ll continue to monitor. Economic numbers from here and abroad: The domestic economy is solid, we want to see signs of stabilization and improvement in Euro and Chinese economic reports. Technical market levels:  We have come too far too fast. Many equity markets have risen 15% in the last 5 weeks. Look for the S&P 500 to run into resistance right here at 2,714 or a bit higher at the 2740 level. Note how far investor sentiment has come in the short term. A month ago, near the S&P 500 low of 2350, CNN’s Fear & Greed Index registered an extreme fear reading in the 9-12 range. Today the index has rallied into the Greed zone with a 61 reading.  What a difference a month makes?! 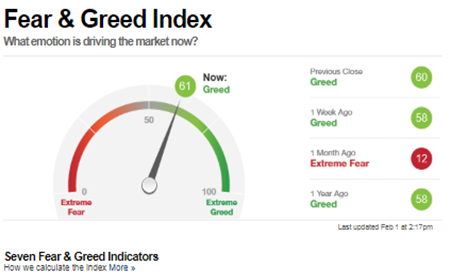