1. Weekly Market Update: The week ended with record closes for the S&P 500, the Dow and the NASDAQ. The big catalyst for the week was testimony from Federal Reserve Chairman Jerome Powell. Based on Powell’s testimony, it looks very likely that we’ll get a rate cut at the next FOMC meeting on July 31st. How big a cut remains to be seen.  Below we consider…Not fighting the Fed, Celebrating Milestones, the importance of the upcoming earnings season, A Fear & Greed cautionary note and the longest economic expansion ever.

2. Don't Fight the Fed (and central bankers everywhere). This is such a key rule to follow.  Fed Chair Jerome Powell testified before the Congress and Senate this week and effectively communicated that the Fed would lower rates at the end of this month.  The bond market has now baked in a 100% chance of a rate cut.  The Fed strives for transparency, so anything other than a rate cut at its late July meeting will send shockwaves throughout the financial markets.  Mark it down.  The Fed will lower the Fed Funds rate later this month. When the Fed indicates lower rates, traders and investors take this queue as a signal to buy. 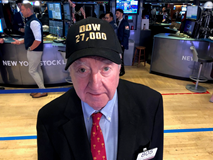 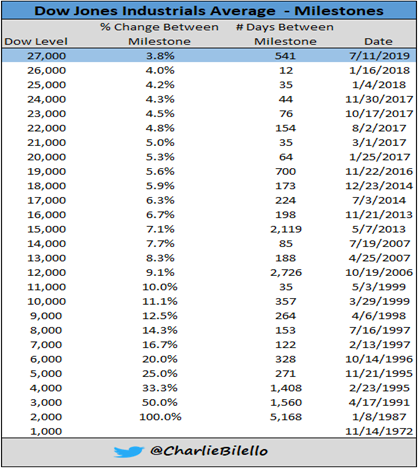 Cashin donned his Dow 27,000 hat this week. This is the year’s first major round number milestone for the Dow. As the Dow rises the percentage move to hit the next round number gets smaller.Here's a look at Milestone history courtesy of market number guru Charlie Bilello. Dow 28,000 would be 3.7% higher from current levels

4. Fear & Greed: The last time we referenced the ‘”Fear & Greed Index” was on May 31st on this blog (7TTK 5.31.19). At that time, the index was at an “extreme fear” reading and we noted that this reading (along with other investor sentiment readings) had indicated a good buying opportunity in the past.  (https://sandycoveadvisors.com/blog/repricing-the-risk-of-added-tariffs-and-an-inverted-yield-curvethis-weeks-7-things-to-know). Fast forward six weeks to today. The market (S&P 500) is 9.7% higher and the Fear & Greed Index has a “Greed” reading. We’d be extra cautious if the index were in the “Extreme Greed” zone.  We’re not quite there. 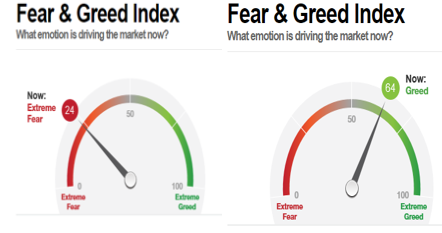 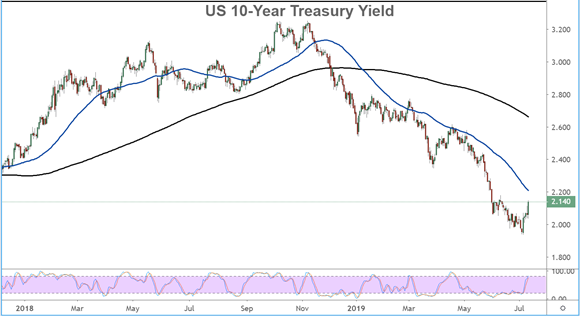 Will Higher Inflation Kill a Big Rate Cut? The core Consumer Price Index (CPI), which excludes food and energy, came out at +0.3% for June against previous consensus expectations for +0.2%. Such an increase in core consumer inflation has not occurred since January of 2018. Why is higher-than-expected inflation important for stocks? One of the key reasons the Fed is considering cutting interest rates in July and beyond is due to "muted inflation." But if inflation is seen to be picking up, the Fed may opt to cut rates less aggressively, perhaps with smaller rate cuts than might otherwise be expected. As shown below on the 10 Year US Treasury yield, a primary benchmark for bond yields, the higher inflation numbers on Thursday helped prompt a further rebound for yields off the multi-year low hit early this month.

6. Time to Focus on Earnings… Starting next week, earnings will take center stage, at least until the crucial Fed meeting at the end of this month. Commercial banks will lead the way. The bar is set pretty low as second quarter earnings through June 30 are expected to come in at -2.6%. This may be the second quarter in a row of negative earnings for S&P 500 companies. The average quarter has shown a 6.2% increase in earnings in recent history.

7. Celebrating the Rodney Dangerfield of Economic Expansions: The ongoing U.S. economic expansion (which gets no respect) just hit a record 121 months old, officially making it the longest on record going back to 1854. With the Fed shifting to a more dovish posture, perhaps it can go on much longer…But just because it’s the longest doesn’t mean it’s the best.  The expansions of the 1960s, 1980s, and 1990s, all beat it out both in terms of the pace of growth as well as the total growth during the cycle.