1. Weekly Market Update: This week's market action brought to mind the old adage that “No tree grows to the sky.”  Stocks fell Friday for the fifth day in a row as a vacuum of news surrounding the trade talks provided little for investors to get excited about.   Prior to this week, depending on which index you select, stocks were up 10-18% over the past 11 weeks. After such a sharp rise, the market was due for a pullback.  The indexes that have rallied the most this year gave up the most this week. Small cap & mid cap stocks declined 3-4% while large cap and international equities declined 2%. Bonds and Reits posted modest gains. 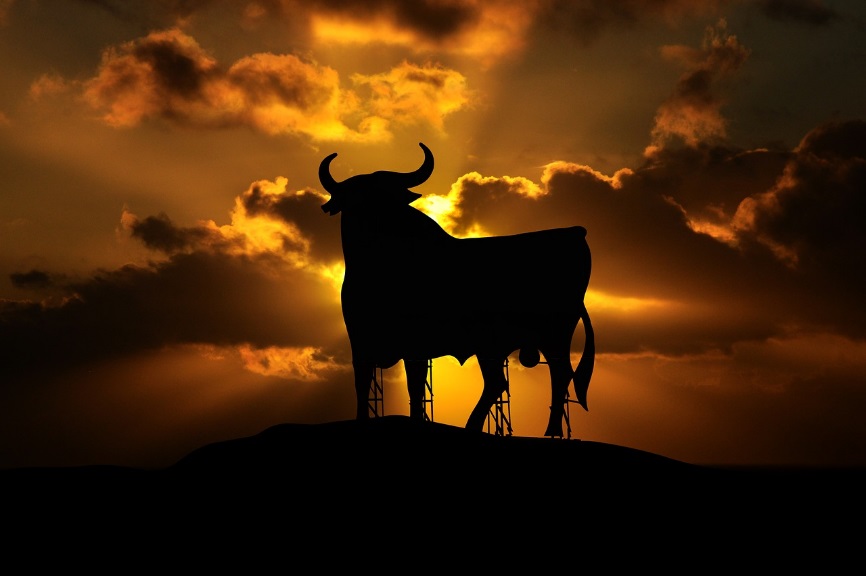 . Happy 10th Birthday to the Bull Market: On March 9th, it will be 10 years since the S&P 500 bottomed at 666. Back then we were in the grips of the great financial crisis, and the U.S. government was taking extraordinary measures to bail out banks, buy up toxic assets, take interest rates to zero and rescue the economy. It worked. Look at the cumulative gains since then:

We may never see another event like the financial crisis in our lifetime, nor the extraordinary measures governments around the world took to bail us out of it. There have been many moments in the past 10 years where "experts" have predicted another crash (or worse) and implored investors to get out of stocks and stay out. The cycle of fear, greed and market extremes will continue as long as there are pundits and markets to make predictions about. Looking forward,  it is difficult to predict what the next ten years will look like or how the stock market will perform. However, history shows us that over the past 100 years,  stocks have risen about 7-8% each year, on average. 2019 looked terrifying at the end of 2018, but here we are, up 10% year to date. You have to be invested if you want to participate in the upside. Here's to ten years of Bull. 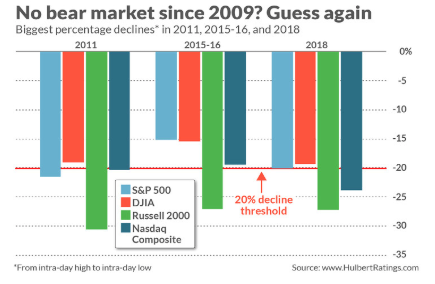 Is the Bull too Old?  Why does the bull market’s age matter? One reason: Some worry that bull markets die of old age. IF indeed this bull market began in March 2009, it would be one of the oldest in U.S. stock market history — and, therefore, so the worriers believe, ripe for an early death. Not So fast…The semi-official definition of a bear market is a 20% decline in one or more of the major market averages. There have actually been at least two, and perhaps three, bear markets since 2009. (See chart to the right.).

So, maybe the Bull isn’t that old after all. As the chart illustrates, 20% declines have occurred periodically since 2009. The first 20% decline came in 2011. The second came in the last quarter of 2018. The third possibly came between May 2015 and February 2016. So have a piece of bull-market birthday cake. But don’t kid yourself that this bull is 10 years old.

4. Stalling Trade Momentum: Markets have been depending on a steady flow of positive trade news to power higher and some analysts feel the announcement of a deal could bump stocks another 10% higher. However, this week while there was no negative news on the trade front, real positive news was also lacking for the first time in weeks. The consensus view is that the U.S. and China are close to a trade deal that could lift most or all U.S. tariffs as long as Beijing follows through on pledges ranging from better protecting intellectual-property rights to buying a significant amount of American products. One of the remaining sticking points is whether the tariffs would be lifted immediately, or over a period of time, to allow the U.S. to monitor whether China is meeting its obligations. It is widely believed that both sides need this deal to quell critics and sure up their economies and political standing. Markets, which hate uncertainty, are getting frustrated and impatient.

5. Trade Deal Pop? The Bull Case: Putting an end to the U.S.-China trade war is central to some of the bigger bull cases for stocks in America and abroad. This week, Bank of America strategists highlighted that the S&P 500 could climb about 10% above current levels (to 3,020) should a “real deal” between the U.S. and China get struck. That 3020 S&P level would exceed the September all-time high of 2,930. The reversal of 2018 tariffs would add 1 percent upside to companies’ per-share earnings growth, the strategists projected.

6. Economic Market Movers This Week: The big events for the worldwide economy this week were the US Employment report and New U.S. Home sales numbers along with newly announced stimulus plans out of Europe.  Friday it was reported that the US added only 20,000 new Non-Farm jobs. This was a big disappointment vs the 180,000 expected additions.  The US economy has been adding jobs at an unsustainably rapid clip. So, this pull back, though sharp, had been somewhat expected. Next month’s jobs report will be watched very closely to see if the trend is really changing dramatically.  Many economists feel a better gauge for the overall strength of the economy is to monitor wage growth. In this case, wages were reported up a strong .4% for January and are running at a 3.4% growth number, the highest rate in 10 years. The European economy is not faring near as well as ours. Thursday, the European Central Bank (ECB) delivered a fresh round of monetary stimulus in a bid to shore up the weakening economy as it cut its growth forecast by the most since the advent of the quantitative easing program. What the ECB is essentially planning to do is ease monetary policy by providing more capital to banks in the form of loans. Like quantitative easing, this should lower short-term interest rates which should be a positive for asset prices, but the ECB’s negative tone surprised traders a little Thursday. At one point during his press conference, ECB President Mario Draghi said “The risks surrounding the euro area growth outlook are still tilted to the downside.” 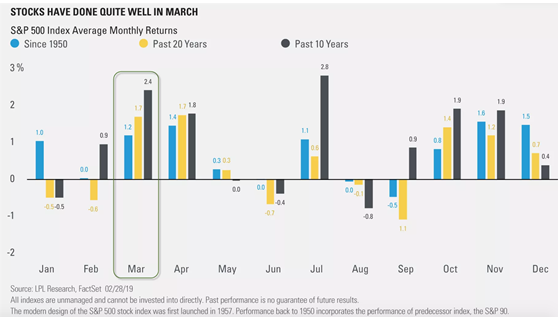 Looking Ahead, Marching On…Historically a Good Month: March came roaring in like a lion on the heels of an 11% gain for the S&P 500 for the first two months of the year. That's the best performance for the broader market since 1991. Historically speaking, March has been the second strongest month of the year on average, and April is no slouch, either. LPL Financial did the historic back-testing which illustrates March's strength over the past 10 and 20 years.

This March is full of market moving events that could easily trip up this rally or cause volatility, so we’ll pay attention to this short list of the big events on the March calendar: