1. Weekly Market Update: US And European stocks held up fairly well this week considering stalling trade talk news. At Monday’s low the S&P 500 touched 5% correction territory before bouncing. Most major averages closed down about 1% for the week.  Emerging Market stocks got hit hard this week in the face of a declining Chinese market. Bonds had another good week and commodities got a bounce on higher energy prices. Below we talk trade, the highest credit card rates ever and the long awaited return of volatility.

2. Trade Talks Stalled Again. Do We Really Have to Wait a Month?!  Mid-week President Trump doubled-down on his claim that Beijing “broke the deal,” while Chinese state media blamed him for the impasse and emphasized the Asian nation’s economic resilience. Thursday, Chinese state media signaled that the country has little interest in resuming trade talks with the U.S. as long as authorities in Washington continue to threaten more tariffs. The next formal opportunity for both sides to come together will be a meeting between Presidents Donald Trump and Xi Jinping at the G-20 Summit at the end of June.  The markets grow weary.

3. Bond Rally- Lowest Treasury Rates in Two Years: Equities have gotten a lot of attention this year given their above average returns.  So, it may be easy to ignore the above average return that bonds are experiencing.  We are not even half way through the year, and muni bonds are up 4.5%, and taxable bonds are up 3.5%. Most likely these returns will moderate as 9% and 7% annual returns are unlikely. Why the rally? The trade war heating up, continued worries about conflict in the Middle East and concerns over growth have all sent investors into the relative safety of bonds.. Treasury yields dropped this week to the lowest level since 2017. However, Goldman Sachs Asset Management is sounding a word of caution, saying yields are poised to rebound as the U.S. economy is just too healthy for Treasuries (and interest rates) to be at this level.

4. Highest Credit Card Rates Ever…Americans now pay their banks an average of 17% interest on credit cards, their highest level in history.  An interest rate of 17% on your credit card might seem exorbitant given a Fed Funds rate of 2.38%, what gives? According to Peter Boockvar, chief investment officer of Bleakley Advisory Group, the main reason is because of post-financial crisis regulation. In 2009, Congress passed the Credit Card Accountability, Responsibility, and Disclosure Act which limited the flexibility banks would have to raise interest rates on credit card holders. “The unintended consequence, which there always are when restrictions are placed on the free market, was that banks then started off the credit card rate at a higher level than otherwise.” according to Bookvar. Another reason for higher borrowing costs is the need to pay for flashy rewards. Banks are luring customers with travel and spending offers, or the occasional a cash bonus.   Banks need to be paid for these perks somehow. A potential warning sign to watch is credit card delinquencies. In the first quarter, the amount of people unable to make a credit card payment hit the highest level in seven years, according to a report by the New York Fed this week

5. Volatility Returns: The S&P 500 pulled back 5% from its recent May 1 high before rebounding a few percentage points. 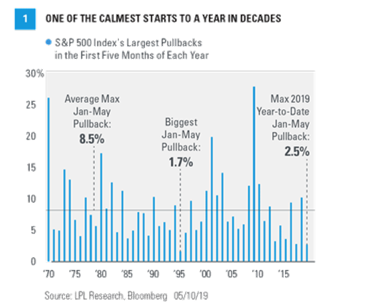 We’d note that 2019 has shown us one of the calmest starts to a year in decades. According LPL Research, on average, the S&P 500 has pulled back 5% or more three to four times each year.  Since 1970, the S&P 500 has made it through the first five months of the year without at least a 3% pullback only twice— 1995 and 2017. On average the peak-to-trough pullback has been 8.5% during the first five months of the year.

6. More on Corrections: This is the 24th > 5% correction since the March 2009 low. They all seemed like the end of the world. A history below, courtesy of Charlie Bilello 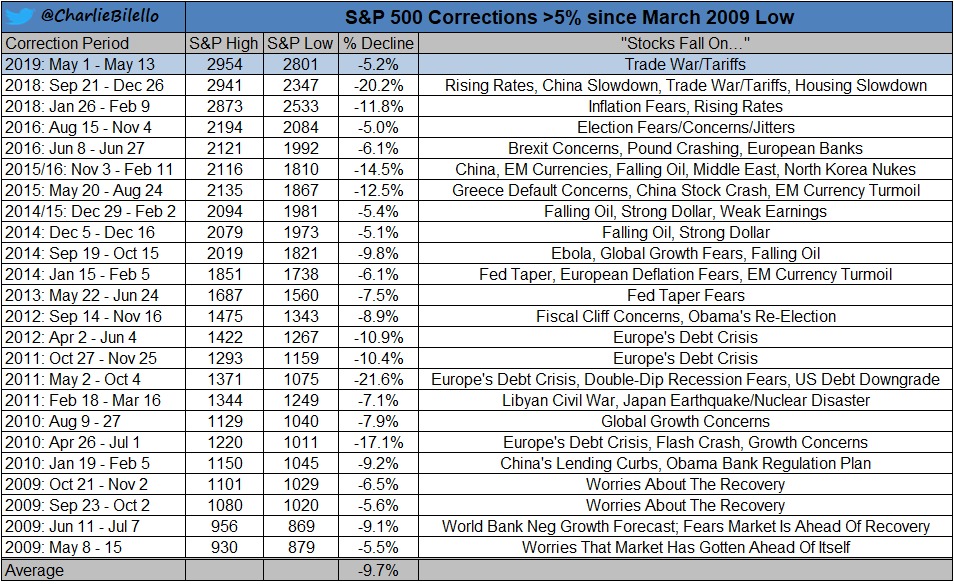