The Ever Given needed all the conditions to be right to free the stuck ship from the side of the Suez Canal, including the worm full moon.  The same is true for the latest SPAC craze.  All the conditions have to be right for these entities to gain market traction.   Let’s take a look at this latest market craze grabbing the headlines to further understand the what and the why.

What is a SPAC?

SPAC is an acronym that stands for Special-Purpose Acquisition Company.   These entities also go by another more descriptive name of “blank check companies.”   In the beginning of a SPAC’s existence, it is merely publicly traded shell company with the only asset being cash.    That cash is raised without knowledge of what the company is going to buy with the cash.  Thus, investors in the newly formed SPAC are basically giving the company a “blank check” to use that cash to fund an unknown future private acquisition.   Yes, SPAC management teams can provide investors with a general sense of what the cash will be used for (“ a focus on financial technology”), but it’s usually not specific.   The targets for these new, publicly traded firms are private companies that the SPAC is looking to take public buy purchasing it and therefore moving it from private to public status.  You can think of it as a kind of back-door initial public offering (IPO).  It can be done faster and easier than a traditional IPO because it does not require an investor road show or a broker/dealer underwriter or detailed SEC documents.

A SPAC has three distinct stages:

Not just anyone can successfully create a SPAC.  The only thing providing its value at first, since it has yet to identify a target acquisition, is the SPAC sponsor who usually has a long history, good credentials, and a reputation of deal success.   Today, the king of SPAC investing is, Chamath Palihapitiya, who has raised over $4.0 billion in three years for six SPACs.

Recent SPACs of well-known companies include Diamond Eagle Acquisition Company which purchased DraftKings and renamed the company and changed its ticker to DKNG.

Given the confluence of positive events, SPACs have experienced an explosion in growth in the last year compared to previous times. 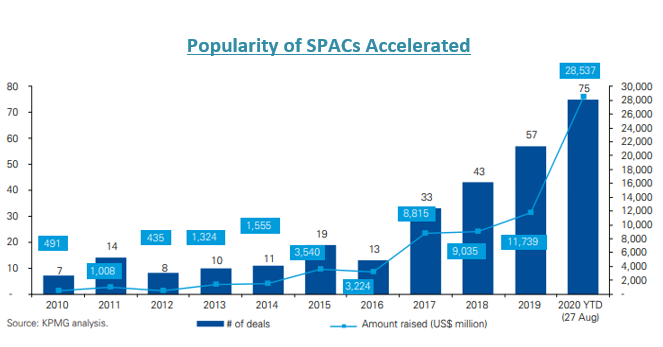 In the last 12 months, SPACs raised 100 times what they raised 10 years ago, according to Bloomberg.  The pace only accelerated further in 2021 as the first quarter is set to close on $100 billion worth of SPAC funds raised, clearing the way for a $350-400 billion raise this year compared to $100 billion in 2020.  That’s more than the last 10 years combined and that type of fuel speaks to the speculative nature of the current market environment.

Why can’t a private company just go public via its own IPO versus merging into a SPAC?  It can and that has been the traditional way of bringing companies into the public arena.   However, a SPAC has benefits that a straight IPO does not.  First, it can speak publicly about their business and their forecasted earnings and cashflows.  Under SEC rules, companies going public via the main IPO route are forbidden from certain financial disclosures.   Secondly, the valuation of the private firm is already solidified via the SPAC before the announcement is made to the public so the valuation of the target is independent of market pricing.  IPO pricing is typically a range of prices leading up to the day of pricing, but can change up or down and can even be pulled right before the deal is struck making valuation more variable than certain.  We already mentioned some of the other benefits like no roadshows or underwriters or extensive SEC documentation that also make it a faster and easier way to become a public company.

A confluence of events and sentiments have created a strong market for SPACs.

All three of these criteria were solidly in the market in the summer of 2020:  Fed lowered interest rates to near zero months prior, the U.S. government poured trillions of dollars of stimulus into the economy to combat economic closure, and investors were eagerly getting back into the market after a 32%+ market correction in Feb/Mar 2020.

Given the speculative nature of these deals, it’s fitting that the sectors of the economy that are seeing the most SPAC involvement are technology, electric vehicles, and green energy.

During the first quarter of 2021 of all the initial public offerings (IPOs) brought to the market, over 70% were in a SPAC vehicle, according to Dealogic.   There are currently over 400 SPACs chasing merger targets today according to the Wall Street Journal.   In just the first quarter of 2021, there were 274 newly created SPACs, which is more than the entire year 2020 that saw 248 brought to market. This creates issues when there are too many SPACs chasing too few ideas with a clock ticking….the price of the target generally goes up.  This is the principal of inflation, where too many dollars are chasing too few goods.    Overpaying for a private deal is bound to occur and the last investor holding the stock is usually the one that pays the price.

Optimism abounds as investors are willing to pay a premium for something they haven’t even seen yet!  But then one or more of the three main ingredients that created the craze begin to turn:  interest rates rise, liquidity dries up, and/or investor sentiment moves from speculation to underlying fundamentals.

This abundance of new deals is bringing into the space those with no SPAC experience at all.    Enter “the celebrity SPACS”.  We have seen a number of well-known names associated with newly created companies including tennis legend Serena Williams, 15-time NBA all-star Shaquille O’Neal, and astronaut Scott Kelly among others.  These well-known names, with not a lot of financial experience, entering a quirky finance space usually means we’re at the height of the craze.

In a SPAC transaction there is usually one clear winner, the target company being acquired.  It has the ultimate say of accepting or rejecting the SPAC’s price for their company.

The other winner has generally been the SPAC sponsor and the few follow-on large investors that get in early and then get out, sometimes before the SPAC’s target is even announced.  Additionally, sponsors typically get benefit (called a promote) for paying the legal fees to set up the SPAC that can amount to 20% of the SPAC’s common equity after the IPO!  Getting back to Chamath Palihapitiya, for all the capital he raised for six companies, he’ll walk away with $1 billion of “promote” for himself, according to Forbes estimates.

The third entity to the party is the public or retail investor who buys the SPAC typically in in stage 2 or 3.  That investor is not always the winner.

Of the IPO funds raised by the SPAC sponsor, typically 30% or more is unavailable for target purchase because it is used for fees and to provide those promotes to the sponsors. According to a study by Ohlrogge and Klausner, a typical SPAC holds just $6.67 a share in cash of its original $10 IPO price by the time it enters into a merger with a target company.  Ohlrogge further studied the returns of SPACs six months after a deal is announced and found the median SPAC lost 12.3%.  A year after, most SPACs are down 35%.1   With a record number of deals this year yet to mature, the returns could be even worse, but only time will tell how the 2020-2021 vintage SPACs will ultimately fare.

The bottom line is that overall, SPACs as a whole asset class are just not great long-term investments and the numbers prove it.   Long after the hedge-funds and sponsors have exited the SPACs, performance has been poor.  Since 2010, SPACs only returned 10% on average versus a 203% return for the S&P 500!  Only 30% of SPACs who have IPO’d between 2015 and 2020 have had positive returns.

As of quarter end, we were seeing enthusiasm in SPACs begin to wane.   This could be a bit of SPAC fatigue given all the deals, but it could also be one of the main events beginning to sour (rising interest rates). 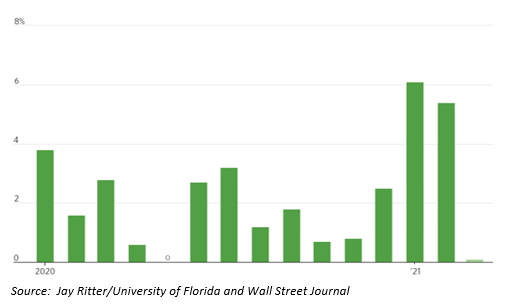 In late March we saw a few SPACs down-size their equity deals in order to get the IPO done because there was not enough demand at existing valuation levels.   Additionally, newly created SPACs are having a poor debut in March, which is a change from recent positive SPAC returns.  As the chart above illustrates, newly listed SPACs are barely rising in price, up just 0.1% on their first day in March compared to the average gains of 5% in January and February 2021.

In conclusion, there are some differences between this SPAC boom and the last one, notably higher-quality sponsors with legitimate credentials.  However, in the sea of SPAC creation this time around, we are still witnessing many questionable deals being done, including celebrity SPACs, and we are inclined to believe that the retail investor will bear the brunt of the SPAC’s underperformance.

Lest we forget, one of the biggest blank check company sponsors of the ‘80s and ‘90s was none other than the Wolf of Wall Street  - Jordan Belfort.

Yes, there are some standout SPACs like DraftKings, that we discussed at the top of this article, which is up 511% since its 2020 IPO , but in general we would say buyer beware.