1. Weekly Market Update: Shutdown Ends, Tax War Begins, Trade War Pauses, Emerging Markets Lead…That's a lot going on, so you may be surprised to know that US stocks barely budged this week, closing flat.  The big stories: Finally we got a reopening of the government (for three weeks) and corporate earnings came through nicely.  Emerging Markets equities were a bright spot, closing up 1.5% this week as they  lead major indexes this year (up 8.04% YTD). We await more news on trade and digest the speculation of a vastly changing tax structure worldwide.

2. Government Shutdown Ends!... For Three Weeks…Can the children (Don, Chuck & Nancy) get along and come to a resolution between now and February 15th? We’ll see. In today's press conference, we learned that back pay will be reimbursed ASAP.  Trump also seemed to back off a bit and throw a bone to the Dems when he indicated that walls can be “smart” and “don’t have to be 200 miles of concrete.” Time will tell if we will be back to square one in a few weeks.  Today’s agreement was short on specifics. Hopefully both sides come to the table with honest intentions as long delays will continue to erode consumer and investor confidence. Also, an open government will now allow us to see some of the economic reports that have been held up over the last few weeks.  The Fed wants to see that data, as they claim to be “data dependent.”

3. Trade Truce Hiccup: This week, Commerce Secretary Wibur Ross scared the markets by saying both sides were “miles away” from coming to a resolution while also emphasizing China and the U.S. are keen to make a deal. Optimism for a trade deal has been boosting stocks since the beginning of the year, so these less than bullish comments did not help matters. Hope does spring eternal:  a group of Chinese deputy ministers will arrive in Washington on Monday to pave the way for the next round of trade talks between Vice Premier Liu He, U.S. Trade Representative Robert Lighthizer and Treasury Secretary Steven Mnuchin from Jan. 30 to 31.

4. Overall Corporate Earnings Are Solid: Phew! The market slide at the end of 2018 was in large part due to fears of a big fall off in corporate earnings. We are simply not seeing any evidence of an earnings tragedy.  Despite slowing global growth, a stronger dollar, trade disputes, and rising wages, corporate earnings look good. While 18Q4 earnings growth estimates have fallen from 20.1% to 14% over the past four months, the current ratio of negative to positive pre-announcements is very low.  Among firms that have announced through Thursday, 75% have topped estimates.

5.  Interest Rates & Mortgage Rates Continued to Decline This Week: The rate on the bell weather 10 Year US Treasury has gone down from 3.25% to 2.73% over the past three months. Lower Treasury yields are pushing mortgage rates down, which is boosting the housing sector. The 30-year fixed-rate mortgage has dropped from 4.94% on November 15 to 4.45% today – providing a boost to home builders and bond prices. Currently, it appears the financial markets are finding a happy medium of allowing yields to decline as the Federal Open Market Committee (FOMC) walks back expectations of future rate hikes. Lower rates have also helped equities prices, but those lower rates can be a sign of future economic weakness as well. The balance is delicate. 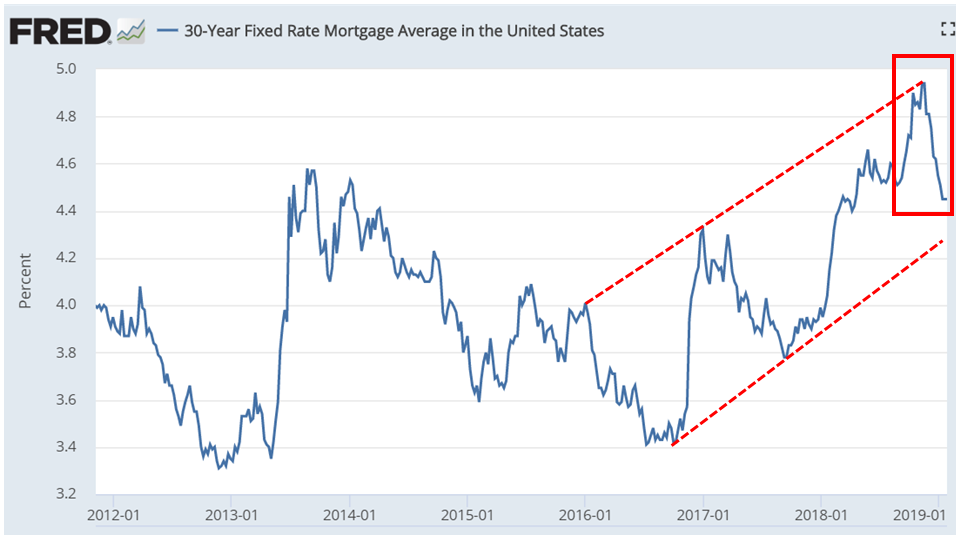 6. Tech Earnings:  While overall corporate earnings (broadly) are surprising to the upside, technology company earnings were particularly good this week. This is key because Tech stocks have a big weighting in indexes and many portfolios. Of particular note was the strong earnings reported by major semiconductor companies.  “Chip stocks” are another one of those 'canary in the coal mine' sectors that signifies strength in technology. High demand for chips or semiconductors means that end demand for devices and components like phones, servers, laptops and tablets is strong.  If you have ever looked inside a modern cellphone, you will see several chips performing various functions - everything from flash memory to power management. Take a look at this picture of a Samsung Galaxy S4 from TechInsights. There are 5 chips in that phone, alone. There are more than 7 billion cellphones out in the world today by some estimates. You get the point... 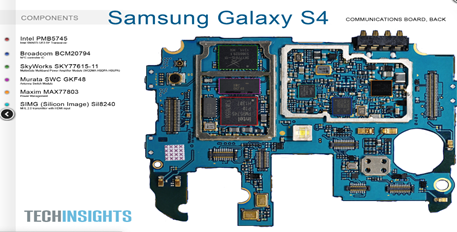 7. 2019:  The Year of the Tax War?!  If Schwab’s Chief Global Strategist, Jeff Kleintop, is right, we'll see more tax cuts around the world. This week he made waves by writing about a 'Race to Zero', as countries seek to lower tax rates in order to compete for investment and a larger share of global growth. The U.S. enacted a sizable tax cut in 2018 that boosted growth and pushed stocks to multiple records. As other developed countries face slowing growth, they are starting to play the same game, as the chart below illustrates. There was much speculation in this week’s press that tax tactics will be a common tool of the Chinese government in coming months. 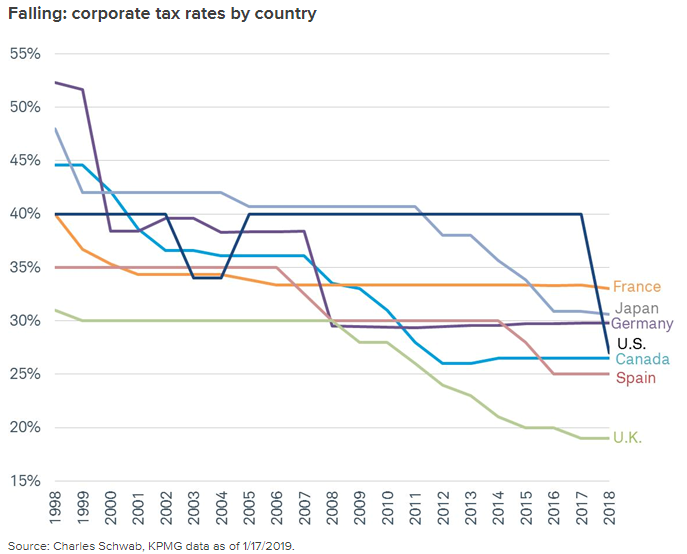