1. Weekly Market Update: The eight week old rally extended on the positive news of an averted government shutdown, continued positive news flow on trade and solid US economic reports. So far, the asset class performance numbers of 2019 are turning out to be a good advertisement for diversified portfolios. While the S&P and Dow are up over 10% year to date, several asset classes are faring even better.  Real Estate Investment Trusts (Reits) are up 13%, Mid Cap stocks are up 15% and Small Cap stocks are up over 16%.  On the week, with the exception of Emerging markets stocks which were flat, all major equity asset classes were up 2-3%.

2. Government Shutdown Averted:  President Trump agreed Thursday to sign a compromise bill with over $1.3 Billion in funding for his wall to keep the government running while at the same time making use of his executive powers to declare a border emergency to unilaterally shift about $7 Billion of federal funds towards the construction of a wall.  Trump predicted that he'd be sued in the 9th Circuit court but would ultimately prevail at the Supreme Court level. In any event, shut down averted. The market seemed to like the news. However it is unclear how much government shutdowns really matter to investors.  Taxes will now be processed, government economic data will be reported, IPOs will progress through the SEC and employees will be paid, so that's all good... but note that the stock market did increase by 10% during the 35 day shutdown that recently ended.

3. Trade Tensions Continue to Abate: US Treasury Secretary Steven Mnuchn reported that China trade talks drew to a positive close in Beijing, tweeting that the meetings with China's Vice Premier Liu were "productive." He posted a happy picture of the delegation on Twitter.  As the week drew to a close,  in his press conference Friday, Trump said:  “We are closer than ever to a real deal with China.”

4.Goldilocks /Silverlocks US Economy: A Goldilocks economy is one in which the economy is strong, but not too hot, and inflation is mild… like a perfect bowl of porridge.  Given the fact that the US economy seems robust but the worldwide economy is exhibiting slower growth, some commentators are calling this a “Silverlocks” economy.....good but not quite golden. This week we got a Consumer Price Index (CPI) number which indicated that prices were flat month over month and that showed inflation had declined from 1.9% to 1.6% over the past 12 months. Meanwhile Industrial Production, Capacity Utilization and Jobless Claims indicated that the economy continues to be in very good shape.

5.  Missing Out on the Rally: Bank of America Merrill Lynch was out this week with a fund manager survey indicating that the rotation of money out of stocks and into cash is at its highest level in a decade. 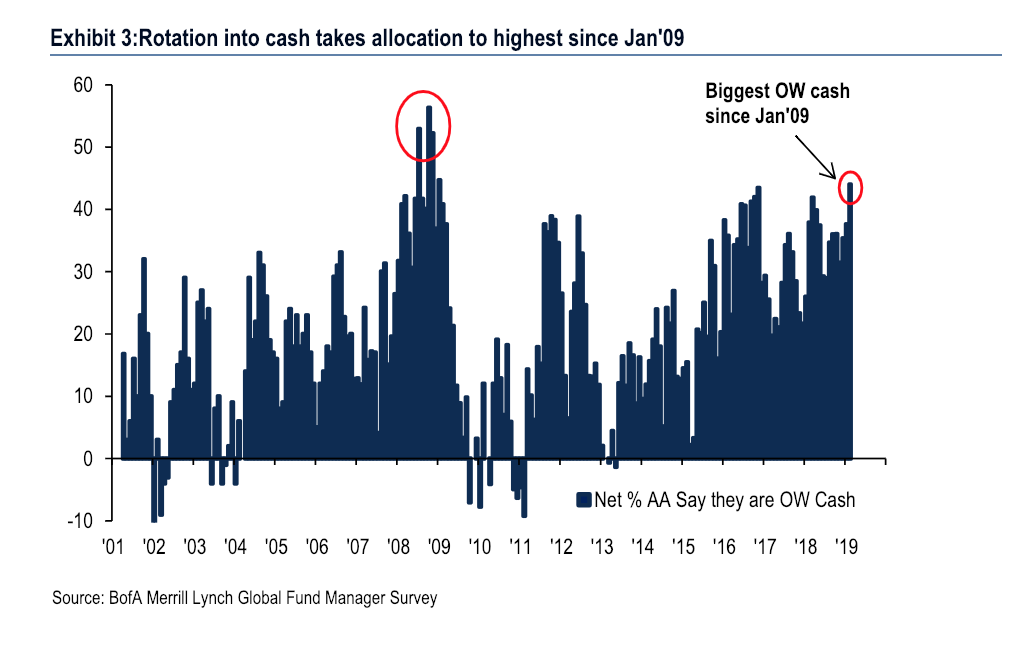 Check out this chart. Market volatility, warnings of a coming recession and the uncertainty around Brexit and the trade wars is compounding that rotation, but it is very real. It means there is a lot of investable money on the sidelines, but it also means that many investors have simply checked out of the market, reducing the amount of participants in it. Those investors who sold in a panic at the end of 2018 have missed a rebound, to say the least - which is why we say that it is impossible to time the market.

Meanwhile, in the U.S., at least, people are feeling as confident as they have in a long time about their finances. According to a recent Gallup poll, 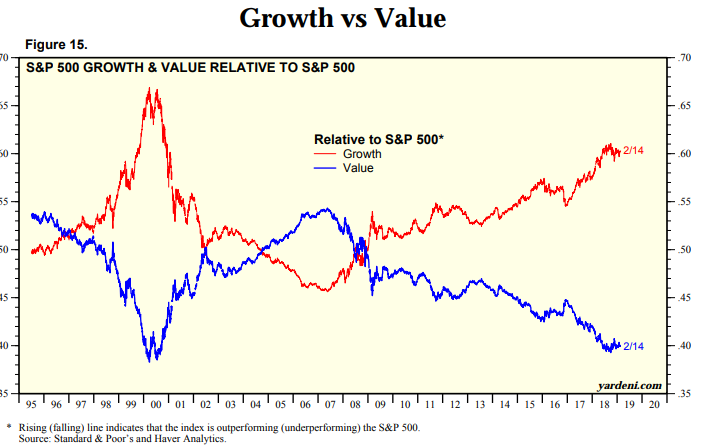 2019 is shaping up to be an interesting year for Active managers. Index investing can give portfolios a great representation in an asset class at a low cost and we are big fans of that. However, this may very well be a good year to pay a bit more for active managers that don’t have to own every sector of the market.  For example, some industries are just not affected as severely as others as far as tariffs are concerned, so why not underweight and overweight accordingly? An index fund can’t do that. An active manager can. We are seeing bigger dispersions between sectors of the economy than usual this year. We suspect active managers have an edge. We also believe that the alligator jaw that you see in this chart will close, as it historically has.  The Value style manager may finally have an upper hand to Growth style managers this year. We’ve decided to end our overweight to Growth and go to an equal weight between Growth & Value.

7.  What We’re Reading…. This is what's caught our eye over the last week.