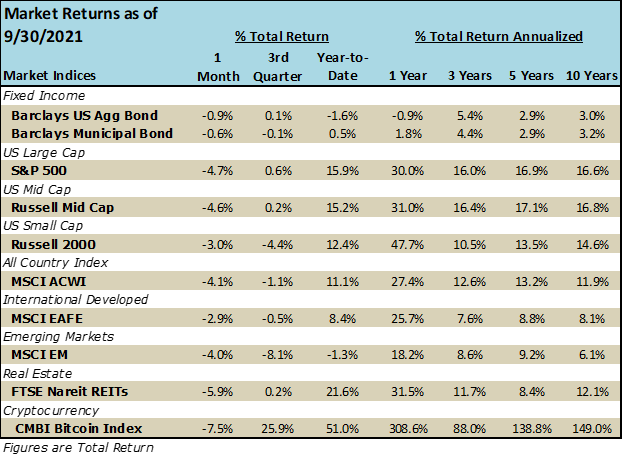 The major indices finished the month of September on a tumultuous note, pulling back from all-time highs.  After seven months of positive returns, it was time for the markets to tap the brakes.  While not a full correction, markets have reconciled the real chance of a downturn due to inflation, supply chain issues, slowing economic growth, and the Delta variant.  While most investors have set aside these worries for their summer vacations, September turned out to be a month where investor concerns were priced into the markets.

In the U.S., large cap growth companies had their worst month since the initial selloff in March 2020, when coronavirus first became a global pandemic. Concerns of rising bond yields, longer-lasting inflation, and tightening monetary policy led to a sell-off in rate-sensitive and growth stocks.  The graphic below shows the one-month price returns for major indexes, with the growth-heavy Nasdaq down the most and the cyclical, transport-heavy Dow Jones down the least. 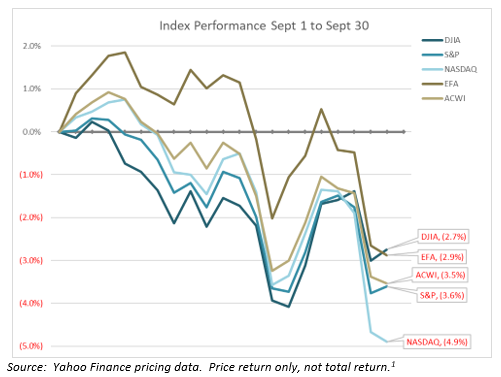 The Dow Jones Average and Nasdaq Composite suffered quarterly losses of -2.0% and -0.4% respectively, while the S&P 500 barely held onto a gain in the 3rd quarter of 0.2% (its 6th consecutive gain). 1

The big story from the international channels this month was once again China.  Along with continued government controls, including a ban on cryptocurrency, China managed to spark global concerns with its property developer giant, Evergrande.  The company has shown signs of unravelling as its high debt levels, now unacceptable by new Chinese rules, has forced it on a path to potential bankruptcy.  The Financial Times estimates that more than 90 million people could be housed in the empty units in China, an amazing oversupply for a country of 1.4 billion people.  While the failure of Evergrande may leave global scars, the parallels to a Lehman event continue to be disregarded as China’s government is well equipped to contain the damage.

Interest rates hovered at low levels with the 10-year near 1.3% to start the month but rose steeply in the back half of the month yielding more than 1.5%.  An improving economy and anticipation of tightening monetary policy sent rates higher, ahead of the Fed’s statements later in the month.

Looking back on this past year for municipal bonds, the outperformance versus taxable bonds is quite impressive.  The 1-year Barclays Muni Bond Index stands at 1.8% total return while the U.S. Aggregate Bond index is down -0.9%.  Much of this can be attributed to rising property values, which contribute to state revenues and therefore improving state government credit ratings.  It is also impressive to note that muni bond mutual funds took in $1.1 billion of investment inflows in the 10th consecutive week of inflows over $1 billion.

In the beginning of the month, all eyes were on the jobs report for some indication of the direction of employment, and therefore Jay Powell’s direction on rate hikes and tapering.  A jobless claims number that was a pleasant surprise (and best since March 2020) boosted the probability of easing monetary policy.  While an improvement, these labor market numbers may be muddied in the short-term due to a challenging hurricane season and back-to-school transitions for parents.

A mix of improving economic indicators, and worsening forecasts, conflicted throughout the month.  Ultimately, investors saw a strong economy as a precursor to tightening monetary policy, or saw lower growth expectations as a warning for future returns. 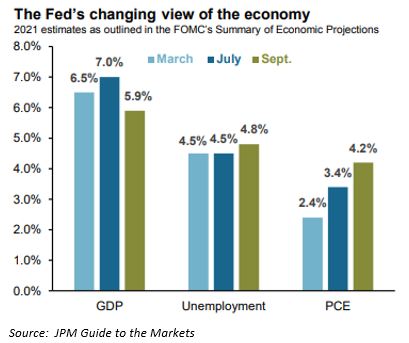 Retail sales in August showed a surprising boost of 0.7% (1.8% without car sales), and durable goods orders up to record highs. While strong demand for goods is positive, suppliers in most areas of the economy maintain the narrative that they cannot meet demand.  The supply chain issues are, in part, created from strong demand pull-through and that is a good sign for the overall health and growth of our economy.

At the FOMC meeting this month, the Fed reiterated “lift off tests” for thresholds that may initiate the tapering of the $120 billion of bond buying each month. The lift off tests are labor markets at maximum employment and inflation at 2.0% (which has been met). Tapering purchases could happen as soon as November and more officials are now seeing rate hikes occurring before the end of 2022. 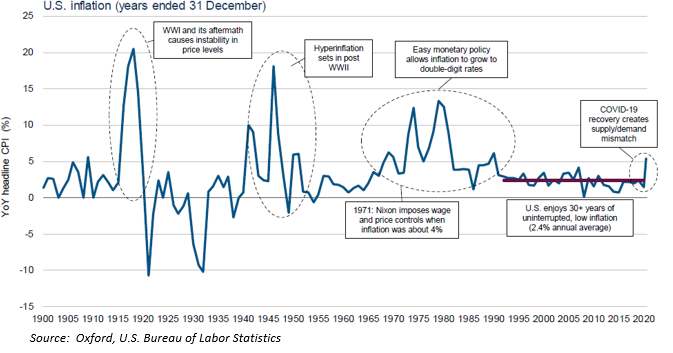 The Fed also noted that it is becoming less confident in its inflation expectations being transitory.   In both July and the recent September meeting, the Fed increased PCE expectations.  While the whole country waits for this “transitory inflation” movie to be over, it is shaping up to be more like a 10-part Netflix series.

The much-anticipated infrastructure bill and tax reform votes are currently being pushed into October as inner-party disagreements continue. Lawmakers on both sides of the argument are digging in their heels, and a position of compromise may ultimately be needed.

Treasury Secretary, Janet Yellen, has taken to various media airwaves this last month warning of “catastrophic consequences” if Congress does not raise the debt ceiling by October 18th.  While her warnings are serious, we would note that the U.S. has never put itself in a position to default on its debt, and we don’t see this happening.  It creates leverage for political agendas, while the debate over the infrastructure bill continues.

The Delta variant strain has finally faced the realities of a well-vaccinated population. According to Johns Hopkins, The New York Times, and the CDC, weekly cases of Covid-19 are showing a downward trend in the U.S.

Additional good news came on the first of October from Merck.  The pharmaceutical giant’s phase three results of a pill used to treat COVID-19 patients were so compelling that it stopped clinical trials and was seeking emergency use approval from the FDA. Merck showed that the drug reduced hospitalizations and death in patients with COVID by 50%.  This treatment is huge news riding on the back of recent vaccines for minors and shrinking weekly cases.

While we never like to see a down market, we must remind ourselves to accept some volatility especially after such a consistently strong run-up we’ve seen this year.   We wrote about a potentially rocky month of September in last month’s Market Perspectives.  The first few days of October continue to see increased volatility with double-digit up and down days thus far for the Dow Jones Industrial Average.   We still have unresolved issues on major infrastructure legislation and tax increases that will factor into market dynamics.   While we hope for a rebound in October markets, we may see another choppy month given all the moving parts and how they ultimately will be decided.