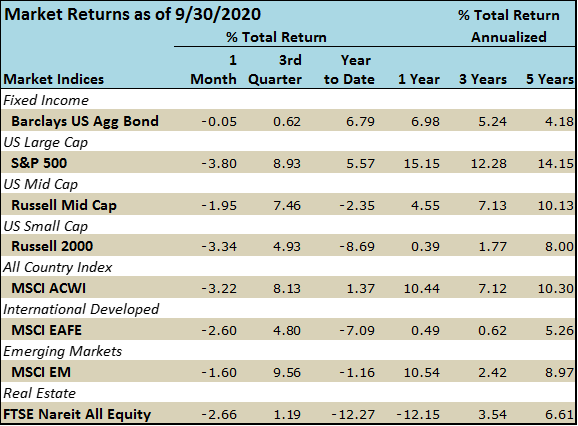 EQUITY MARKETS:  Equities took a breather in September, but still recorded strong quarterly returns.   The NASDAQ almost went into correction territory (down 10% or more) during the month, but managed to bounce off the lows to end the month with a modest 5% decline.  We continue to see a pattern of “haves” and “have nots” regarding the markets.  Large cap, stay-at-home tech stocks continued to work while smaller cap cyclicals struggled.   The same pattern is true of sectors in the economy where technology, consumer discretionary, and industrial have been enjoying better performance while energy, financials, and utilities continue to struggle. Looking globally, there are regional winners and losers as well, illustrated by the graph below. 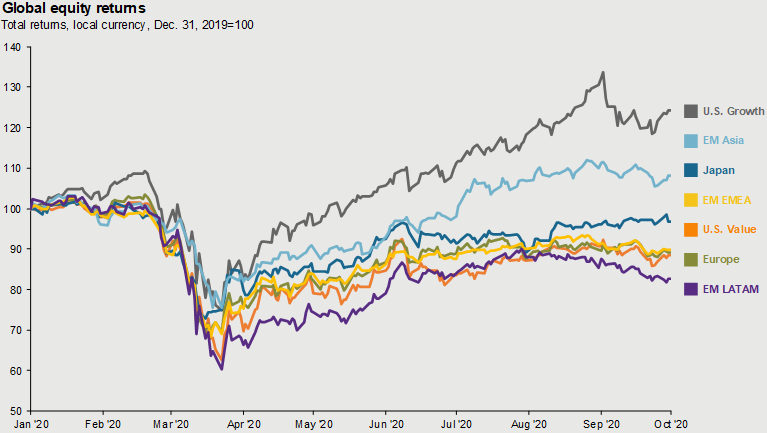 On the international side we see a good risk/reward profile and continue to want to own stocks outside the U.S. Europe has embarked on a strong fiscal stimulus program and many of those countries have a cohesive plan to mitigate COVID-19’s spread.  Valuations of international stocks are materially less expensive than the U.S., making them attractive.

We’ve received a number of questions regarding the technology exposure in the large cap asset class of our clients’ portfolios, and if Sandy Cove’s investment selections are benefiting from the tech sector’s performance. The quick answer is “yes”, but we did a more formal analysis as well and wanted to share the findings.

We currently have seven investment strategies in the large cap U.S. asset class on our Sandy Cove Buy List. The strategies are predominantly actively managed portfolios (core and growth) and a few passive S&P 500 index strategies.  We created a portfolio of those large cap strategies giving each one equal weight to create a sample portfolio and see what the largest weighted stocks in the portfolio were and how the portfolio performed relative to the benchmark.  Listed below are the top 20 stocks in the portfolio from largest to smallest.  As you can see there is strong representation in technology, consumer discretionary and healthcare which are three areas of strength in our economy.  There are six pure-play technology stocks in the top 10 holdings alone. Thus, you would correctly predict that this portfolio outperformed the benchmark.  Year-to-date through September 30, 2020 this sample portfolio rose 17.1% versus the S&P 500’s 5.6% return. 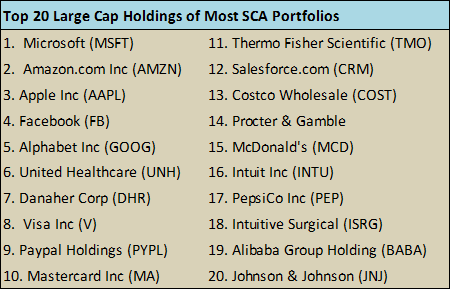 BOND MARKETS:  September was ripe with concerns relating to COVID-19, politics, and the economy, but the U.S. Treasury yield curve barely moved from the previous quarter end (see graph below). Despite the political angst in the headlines, the economic data reported was mostly positive due to continued increases in service and manufacturing sectors.    As the table below shows, interest rates have held pretty steady over the last few months.   The yield curve from 2nd quarter end to 3rd quarter end are sitting almost perfectly on top of each other.

MUNIS:  As with Treasuries, municipal bonds also showed little change in price or yield.   New issues topped $47 billion in the month of September, one of the highest Septembers on record for muni deals.  Demand remained good for municipals as witnessed by the $6 billion of new inflows of money buying muni mutual funds.  Many states updated their tax collection expectations with better than expected forecasts than their first dire predictions this spring.   Most bond managers are bracing for a volatile October given COVID-19 case upticks and major elections less than 30 days away.

ECONOMY:  GDP during the 2nd quarter was down a staggering -31.4% after a drop of -5.0% in the 1st quarter.   JP Morgan’s strategist expects a +34.0% GDP rebound in 3rd quarter when that statistic is posted later in October.  Percentages can be deceiving. To get back to where we were just last year (9 months ago) we would need an annualized GDP growth factor of +53.3%! Thus, while the 3rd quarter figure will look great on the surface, there is still a long path to economic recovery.

In February and March the U.S. economy lost 22.2 million jobs and in subsequent months regained 10.6 million. This helps put the latest jobs report into context.  The last monthly jobs reports before the election was reported on October 3rd and was much weaker than anticipated.  Economists were looking for nearly 900,000 of new jobs, but the report was well short of that at 661,000.   Clearly the path of COVID-19 and any follow-up stimulus package out of Washington will be closely watched to provide direction to future job growth.

Is the jobs report simply a one-month pause or is this the beginning of an economic fade?  It’s hard to answer that question given that many of our leading economic indicators are still backward looking.  We know that the housing market has been strong, retail sales have rebounded nicely, vehicle sales are up, and manufacturing figures point to an expansion with their indexes over 50.0 (see chart below). 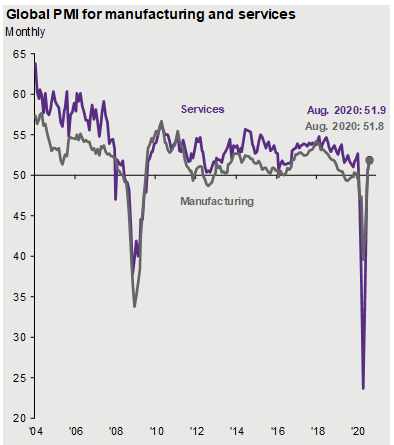 The fourth stimulus package now delayed by two full months is trying to resurrect itself again with House Leader Nancy Pelosi and Treasury Secretary Mnuchin in discussions as of this writing.  It’s hard to tell if the stimulus package is real or just political maneuvering.  In Washington this summer, our elected officials failed to deliver a much anticipated fourth stimulus bill aimed at helping consumers, businesses, and municipalities alike.  The two parties were literally trillions of dollars apart before the summer recess and showed no sign of compromise. There is, however, movements afoot to get back to the negotiating table in early October and provide Americans with the continued economic aid they need.  We are optimistic both sides can strike a deal to help Americans, especially weeks before major elections.

COVID-19:  As states eased up on restrictions and students returned to school, we saw an increase in COVID-19 cases in September.  As the month of September closed out, daily cases were 42,000 per day and deaths were about 700 per day.  There are currently 11 viable vaccine candidates in phase 3 trials today and we expect to hear news on at least two of them (Pfizer and Moderna) before year-end.   What is less clear is the timing of drug(s) to market and what the path of the roll-out will look like.  What is very clear is that we need a medical solution to this pandemic to fully re-open the world economy. 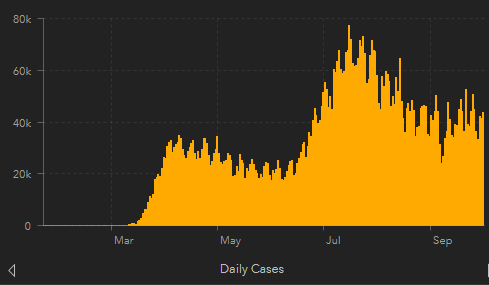 ELECTION: There are less than 30 days to go before U.S. elections and uncertainty is running high. October will be a month rich in headline news.  We expect markets to be volatile during this time due to the many unknowns the country is facing.

We are hopeful that we will have uncontested results that provide a clear view of how Americans voted for their elected officials, but we realize that may be asking too much!

While we potentially will have to wait beyond November 3rd for the results, we do want to provide a long-term perspective about how the economy and the market handle government changes.  As the chart below illustrated, during the last 73 years that we have witnessed three types of governments (Republican, Democrat, and divided), on average, in all three scenarios, the economy grew and our stock market grew. 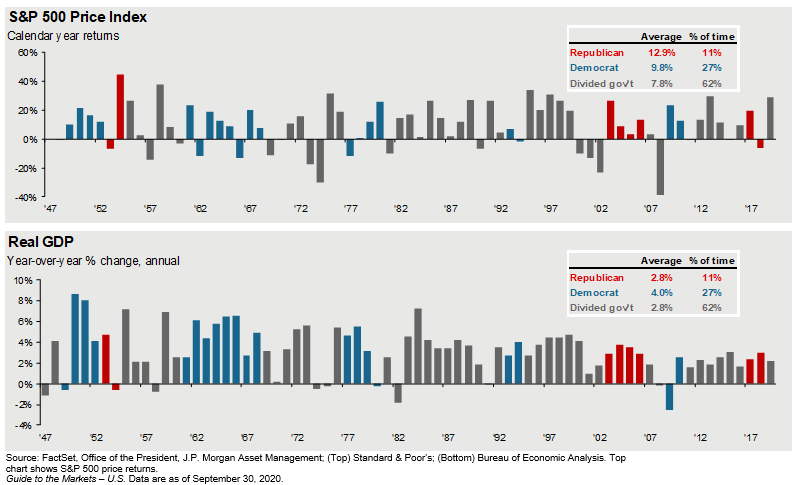 We expect these next three weeks leading up to the election to be volatile as the market tries to determine the front runners in the White House and Senate.   We would like to be able to report on the official results in next month’s Perspectives, but it may take a while for all the ballots to be tallied and ultimate winners made known.  As always, please reach out to any Sandy Cove Advisor colleague with questions or concerns.