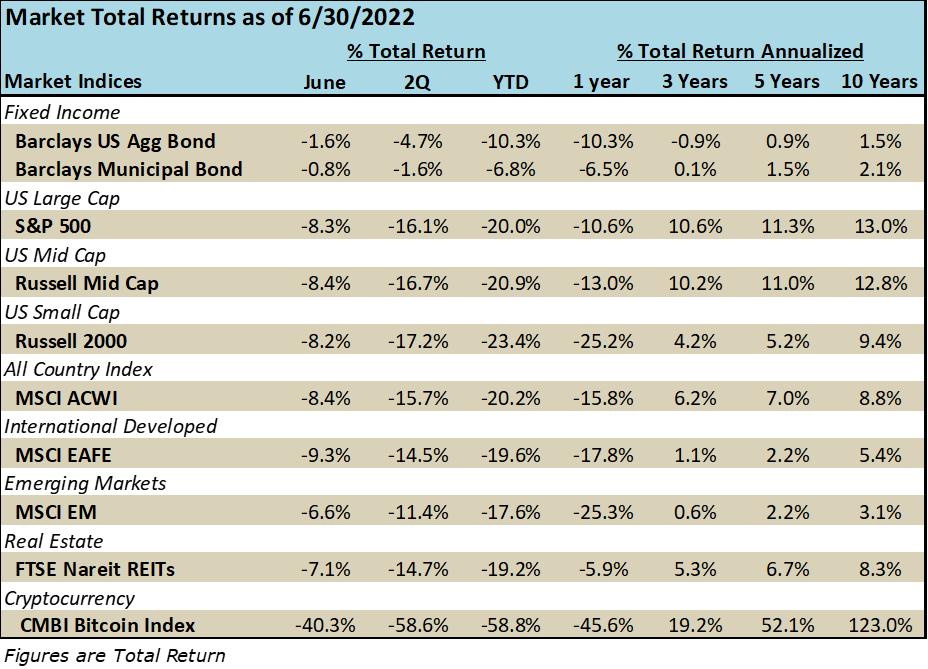 Equity markets had the worst first half start in over 50 years with the S&P 500 dipping more than 20% below its record high in early January due to a variety of foreign and domestic factors. Inflation in the U.S. breached decades-long highs and damaged consumer confidence. The Russia-Ukraine war has primarily contributed to a run up in energy prices which takes a toll on company margins and consumer wallets. China’s strict COVID lockdowns have rekindled supply chain issues that the U.S. faced in 2021 and were never fully restored.

The large majority of negative performance in the S&P 500 can be attributed to valuation compression. The S&P 500 had a Price-to-Earnings (PE) ratio of about 21.2x going into the start of Q2 2022, and now, at the end of the quarter, sits at 15.9x—below the long term average forward PE ratio. Earnings expectations have steadily increased throughout the first half of the year, seeing a modest gain of 6.7%. Investors will be keeping a close eye on changes to company earnings and guidance this quarter, as cost pressures mount. 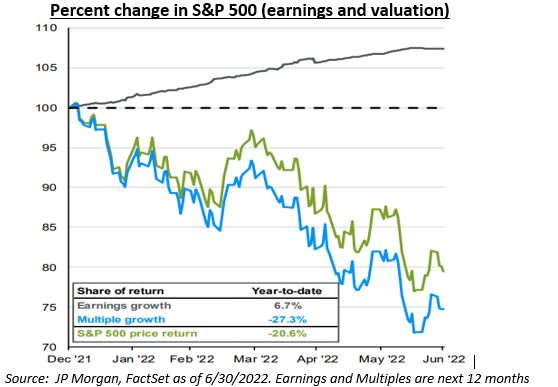 From a sector perspective, all sectors posted negative quarterly results. The cyclical and defensive sectors like consumer staples, utilities, and healthcare were down only modestly compared to the declines in secular growth sectors like technology and consumer discretionary. An increasingly aggressive Federal Reserve has pushed up borrowing rates, discounting the price of the growthier stocks more heavily than value stocks. 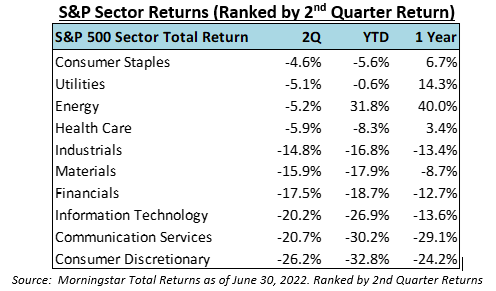 Inflation is still a big concern, and while the bond market seems to have factored in a more aggressive Fed path to tightening interest rates, we believe the equity markets have potential to factor in a decrease in future earnings if the economic outlook turns bleak. Recently a few companies including Nike, Bed Bath, and Restoration Hardware have expressed that earnings estimates are currently too high. The same story played out just three weeks after Target’s earnings report came out when they released downward revisions due to a supply/demand mismatch on many goods.

We devote some time in this quarter’s write up to the Fed because we are in the midst of a monetary tightening cycle. The Fed raised rates 0.75% in June (largest since 1994) and telegraphed more large rate hikes of 50-75 bps that could bring the fed funds rate to 2.75% by year end from just 0.25% in January.

Can the Fed orchestrate a soft landing?  Can they raise rates just enough to slow growth and reduce inflation without moving the economy into a recession? Chairman Powell warned the public that a soft landing would be “challenging” and a recession was “certainly a possibility” as his goal to quell inflation is a top priority even at the expense of slowing economic growth. To a degree, Powell’s setting of expectations could help the effort to reduce inflation and markets tend to agree that elevated inflation is more dangerous than pushing the economy into a mild recession.

Treasury bonds continued to post historically poor returns, trading largely on macro headlines. The 10-Year Treasury yield rose to end the quarter at 3.01% after peaking at a 10-year high of 3.47% earlier in the month. While the price declines, it presents an opportunity to invest at higher rates than we have seen in years.

Municipals, or tax exempt bonds, tended to follow the downward trend of Treasury movements, but proved less volatile. The Muni market has been subject to record redemptions after a record inflow year in 2021, and further sold-off due to tax-loss selling. To put it in perspective, $76B of 2022 YTD net outflows was more than $48B outflow during the pandemic and $70B during the 2013 taper tantrum. Flushed with cash from stimulus, municipalities are fundamentally strong and very creditworthy at the moment. However, with the expectation of an economic slowdown and therefore lower tax revenue, credit strength will be closely monitored.

What the bond market is telling us is that the Fed’s actions have been too late and behind the curve and they will have to move quicker. This in turn, increases the risk of a recession since the Fed cannot be as measured in its response as it would like and time is not on their side. 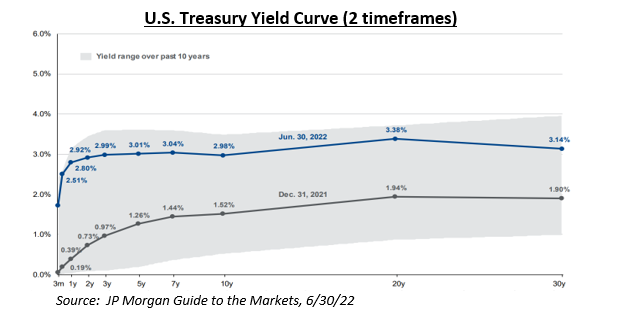 As the market began to realize that the Fed would likely have to do more rate hikes than were expected, the short end of the curve rose dramatically while the long end of the curve did not. The yield curve has flattened greatly and inverted twice as noted in the chart below.  Inversion occurs when the 2 Year Treasury is yielding more than the 10-Year Treasury bond. 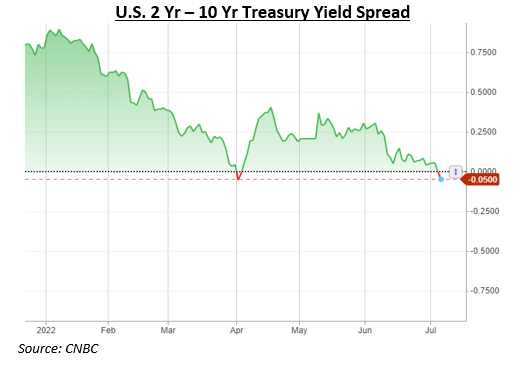 This inverted yield curve could be a warning sign that the economy is approaching a recession. It reflects a more negative outlook of future growth.  Another way to think of this yield curve signal is to apply what it means for a bank. The yield curve spread represents the difference between a bank’s cost of money and the revenue it will make by lending/investing it over a long time horizon. When banks make less money, lending slows and so does economic activity.

The refinance boom allowed many homeowners to reduce their debt cost on their homes for the past few years. This wave of refinancing has likely come to a halt as mortgage rates have spiked back up to 2019 levels. The chart below shows the path of the 30-year fixed mortgage rate from Dec 2018 through March 2022. In the first week of April, the 30-year rate has exceeded 5.0%. This will likely cool the housing market and contribute to falling inflation data in coming months. 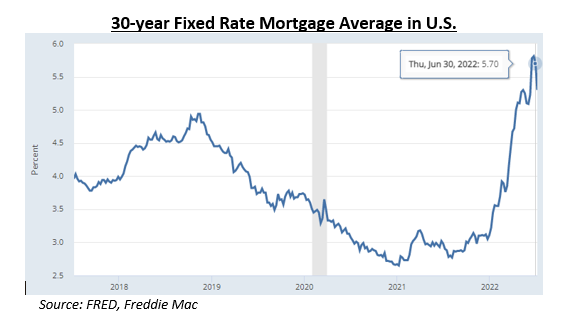 During the second quarter, Sandy Cove Advisors made more tactical allocation shifts. These changes were designed to protect portfolios from what we believe will be challenges in commodity prices and foreign currencies.  A reminder that the first quarter brought two tactical allocation shifts which lowered international equity weightings and lowered duration in applicable fixed income allocations.

Last summer we introduced most clients to a mutli-asset fund designed to offset the eroding effects of inflation on portfolios. Since then, the mixture of TIPS, commodities, currencies, etc. has returned a positive total return to counteract the painful stock and bond environments. It was a material benefit to portfolios as both bonds and stocks returned negative double-digits versus a positive 2% total return for the fund over the same 12-month period.  However, we recently exited this fund due to our belief that the 50% of the fund invested in commodities, EM currencies, real estate, and gold will no longer perform as well.  With cash (money market funds) now returning more than 1.0% with much less risk, we chose to move half the proceeds into cash, further increasing our cash position in client accounts, which will be deployed back into the markets eventually. The remaining proceeds were invested in U.S. large cap equity dividend stocks (at attractive valuations).  Our tactical investment in the inflation protection fund was a success and now that market conditions have changed so dramatically in the the last few months, we feel that we have excited at the right time.

The U.S. consumer still has a high savings level, is largely employed, and has strong demand to purchase goods and services. Prices remain elevated even with a recent drawdown in commodity prices. How persistent inflation  affects consumer confidence and spending in the future remains to be fully seen, but it’s something we are keeping a close eye on. With that said, consumer spending rose 0.2% in May, which adjusting for inflation, represents a decline of 0.4%. Likewise, all three major measures of household income rose a collective 0.5%, but real income declined by 0.1%. We may be starting to see some of the first cracks in the excess consumer demand driving inflation.

Employment continues to be a key strength in the U.S. economy as 372,000 jobs were added in June and the unemployment rate remains at 3.6%. This is close to the average monthly jobs over the past three months at 383,000. With that said, there is still a wide gap in the labor market. With about 1.9 jobs for every job-seeker, it is largely an employee’s marketplace, which tends to prop up wage growth and add to inflation measures.

The Federal Reserve will be raising rates from an economic position of strength. And continuing to raise rates is necessary given the inflation that we have witnessed. Both the Core CPI and Core PCE (“core” excludes food and energy) are well above the Fed’s long-term 2.0% goals. It’s time to remove liquidity from the economy where there are now too many dollars chasing too few goods.

Geopolitical risks have been of great concern with the Russia-Ukraine conflict at the forefront. We are still concerned about the economic fall-out from the war on the health of the European economy given higher energy cost inputs. What is clear at this point, is that Putin is bracing for a long-term invastion which has negative ramifications for everything.

ON TO SECOND HALF

Financial markets will be taking their cues from Federal Reserve actions, economic indicators, geopolitical events and what corporations are guiding for the 2nd half of 2022 earning growth. We will surely see instances of “bad news is good news” (and vice versa) where surprises in economic data may have the opposite effect in market prices as a weaker economy may encourage supportive policy from the Fed.

While the markets have already performed poorly year-to-date, we are not hopeful of a sharp V-shaped recovery and continue to make allocation shifts in client portfolios that are more protective in nature.

As a reminder, volatility in equity markets is normal. It usually comes about due to a negative event or perceived threat to economic growth. Many of our clients have seen a chart like the one below that we use to remind ourselves that the last three-year, cumulative 100%+ return of the S&P 500 was not normal. Market ups and downs are normal, but 75% of the time, markets end with a positive return. 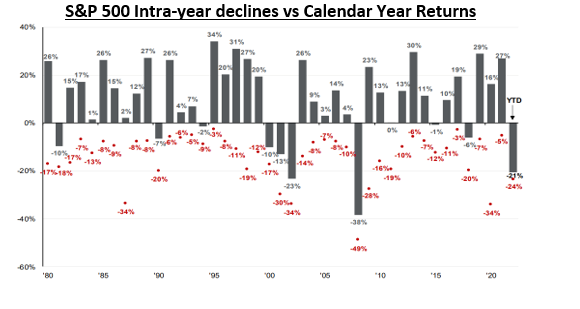 Pessimism generally does not survive the long game in financial markets and timing the markets hurts more often than it helps. Currently, all we are hearing about in the press are the tough issues in our current economic situation which has turned investment sentiment decidedly negative.  Our economy runs in cycles, into and out of periods of expansion and contraction. Over time, a healthy economy recovers and continues on a growth path just as the U.S. economy has done throughout modern history. We expect this to be the case this time around as well.

It is normal to feel a bit of unease about the current decline in the financial markets. Your team at Sandy Cove Advisors has experienced difficult market cycles historically and we know there is eventually light at the end of the tunnel.  In the meantime, we have created cash cushions in client portoflios and will be happy to deploy that back into growth investments which will again see their day in the sun.  As always, we are more than happy to have discussions with our clients, please do not hesitate to contact us.