1. Weekly Market Update:  There were some big moves in the financial markets this week.  Surging interest rates were the headliner. As measured by the bell-weather US 10 Year Treasury, rates surged from Monday’s 1.55% level to 1.87% on Friday. That’s a 21% move in rates! Money flowed out of safe haven securities such as bonds and gold and into equities. Small Cap stocks lead the way with a monster 5% move.   All other major equity indexes, both foreign and US, gained 1-2%. Below we delve deeper into the “risk on” mentality that engulfed the markets this week.

2. Investor Sentiment Shifted Quite a Bit This Week... from bearish (“risk off”) to bullish (“risk on”). Two weeks ago in our blog “Keep Calm, Carry On” we highlighted the fact that CNN’s Fear & Greed Index had hit an “Extreme Fear” reading indicating that markets were ready for a bounce. The S&P 500 has rallied 6% since then and investor sentiment has now shifted to “Greed” mode.   When this indicator has hit “Extreme Greed” in the past, the markets have tended to pause and pull back. The main reasons for improving sentiment? Better news on the trade war front and relatively strong economic reports. 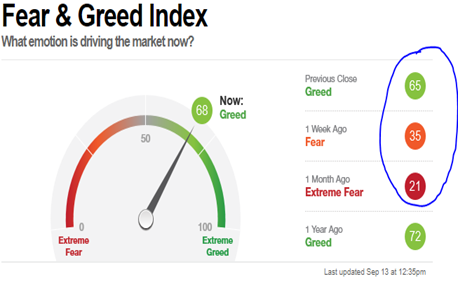 3. Surge in Interest Rates: As noted above, we experienced a large spike in rates this week ahead of the Federal Reserve meeting next week. While the Fed is broadly expected to lower rates in that meeting, it appears that the market is looking past the meeting to other secular trends. This week the European Central Bank (ECB) lowered rates modestly and called for more fiscal, rather than monetary policy relief, going forward.  In addition, statements out of the Bank of Japan also indicated that their ability to continue to lower rates may be ending. Other factors such as better news on the trade war and increasing inflation in the US (2.4% CPI reading) led many bond market participants to sniff out what may be a real bottom for interest rates.

4. Next Week's Big Event: The US Federal Reserve will meet.  Traders are betting on an 88% probability of a 0.25% rate cut, according to the CME's Fed Watch tool. That probability has decreased from 100% over the past several weeks.

5. Trade Update: The Trump administration announced Thursday night (via Twitter) that it will delay the implementation of the latest round of tariffs for a couple of weeks, at China's request. A day earlier, on Wednesday, the editor of a state-run Chinese blog wrote that authorities would encourage the country’s firms to buy US farm products. The editor said that China would add soybeans and pork to the list of items exempted from the tariff list. The move came after U.S. administration officials discussed offering an interim trade deal to the Asian nation.

6. European Central Bank (ECB) Stimulus:  Thursday the ECB cut the deposit interest rate banks pay to park excess reserves by 10 basis points (0.1%). The move pushed the rate to minus 0.5%. In other words, banks are paying the ECB to hold money for them. In a departure from his norm, ECB head Mario Draghi also called for increased fiscal spending. Draghi singled out the Dutch government, saying now would be a good time for it to activate a “50 Billion investment program.”  It is possible that Draghi decided to do the maximum on monetary easing in order to increase pressure on governments to increase spending. The message seems to be "if you don't like negative rates, then get spending so the ECB can hike."

7. Small Cap & Value Stock Out-performance: Aside from this week’s surge in interest rates, other notable trends began to reverse as a “risk on” mindset took hold.  Investors piled into smaller stocks (Micro cap and small cap stocks).  These smaller stocks had been significantly outperforming Large caps as the table above highlights.  Another big reversal occurred as Value Stocks outperformed Growth Style stocks for the first time in years.  Time will tell if there is a real trend here.  Our well-diversified portfolios have good representation in value stocks and small cap stocks. It was a good week. 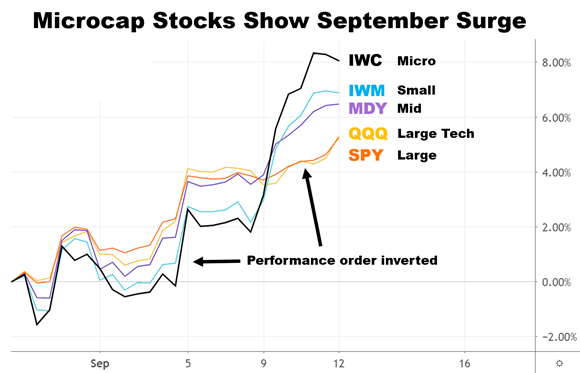