Repricing the risk of added tariffs and an inverted yield curve...

1. Weekly Market Update: Overall a pretty tough week for stocks as tariff turmoil again took center stage. Economic numbers came in just fine here in the US but global fears have spooked the bond market. The bond market is warning of a slowdown while employment, sentiment and GDP numbers say ”not so fast”.  Most major equity averages closed lower by 1.5% to 2.5% this week while emerging markets stocks bucked the trend, closing up 1.5%.    Bonds were up close to 1% as well.   Below we examine the first 5% correction of the year, falling rates, the bond rally and the economic conundrum we’re in. 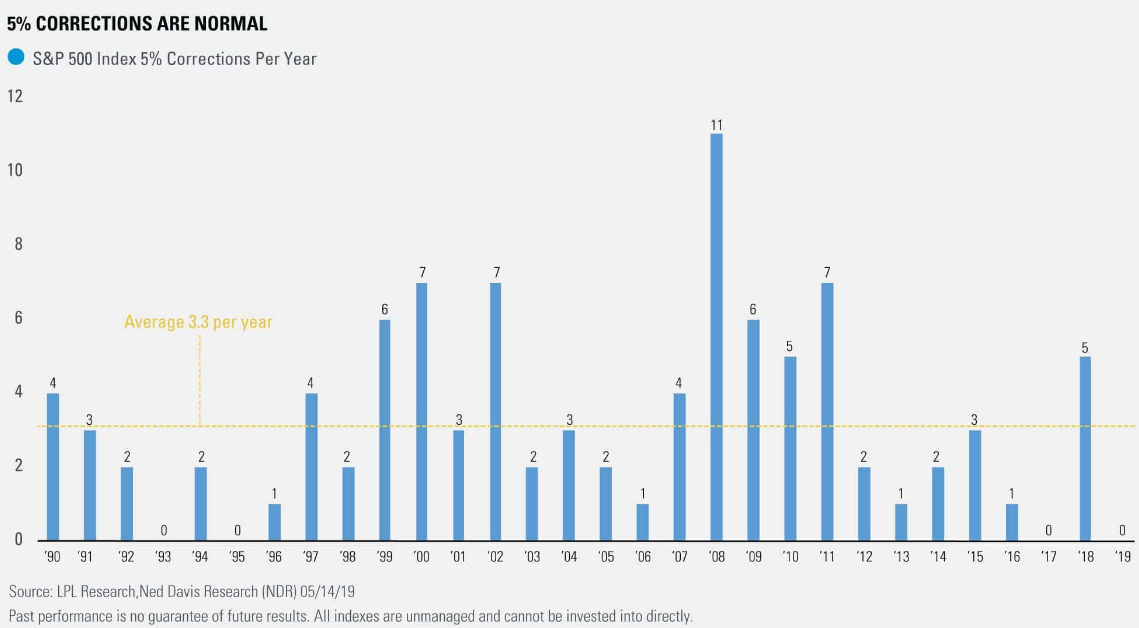 3. Mexican Tariffs-Trade:  The volatility in stocks is certainly caused by trade issues to a large extent but worries of a global economic slowdown also play a big part in the action.  The two are linked of course, troubled trade leads to slower growth.  This week the news on trade was particularly troublesome. Yesterday, President Trump said he will impose a 5% tariff on Mexican goods, taking effect on June 10, if the country does not stop immigrants from illegally entering the U.S. The White House warned that the levy could rise as high as 25% by Oct. 1. It all dims the prospect of a trade deal with China as the president shows he is willing to arbitrarily impose punitive trade measures. China is progressing with plans to restrict exports of rare earth metals to the U.S.. The editor of a ruling Communist Party newspaper said authorities in Beijing plan a  “major” retaliation against the U.S. The news comes as Chinese economic data continues to show worse than expected performance, with manufacturing PMI falling further below 50, indicating a contraction. 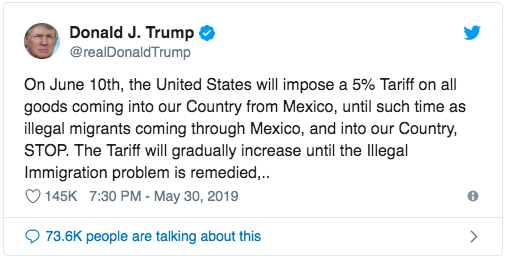 4. Economic Stats Are Strong.   Despite the trade worries, and a bond market that is spooked by fears of an economic slow-down, this week’s economic statistics did not indicate the economy cared for those fears, at least not yet.  This week Consumer Confidence hit a 6 month high. GDP was confirmed to be at a very strong 3.1% level. Jobless Claims numbers Wednesday indicated the best employment situation in 50 years is still upon us. Today we learned that Personal Income and spending are both on the rise as well. With stocks falling and interest rates falling, the market must feel that there is weakness ahead in these economic stats. A bright spot next week could be the highly anticipated U.S. jobs report on Friday. Economists are expecting that the US economy added another 180,000 jobs in May. An in-line number could go a long way towards easing growth slowdown fears. 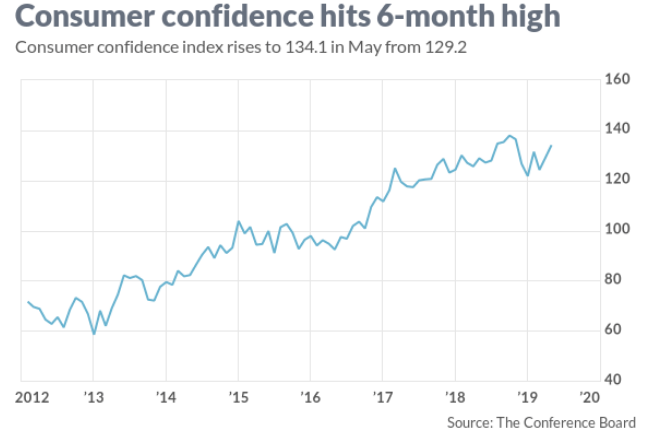 5. Yield Curve Inversion Alert: Despite the fairly bright economic stats discussed above, corporate profits are slowing while the yield on the 10-year U.S. Treasury fell below 2.21%, its lowest level since September 2017. Meanwhile, the yield on the 3-month U.S. Treasury bill hit 2.36%. That's what we call a yield curve inversion, and many forecasters say it is a precursor to a slowdown. The way to think about it is that purchasers of U.S. Treasury bonds think the economic outlook is riskier in the near term (3 months in this case), than it is in the long term (10 years), and should be paid more in interest, or yield, to loan the U.S. money. Still an inversion is a warning sign to pay attention to. The Federal Reserve Bank could come to the rescue and lower short term rates and correct the inversion. In fact, market participants are expecting just that to occur. Option traders are expecting a 70% chance of a Fed rate cut at the Fed’s October meeting and they are betting that there is a 60% chance of two rate cuts before year end. Rate cuts can make inversions go away pretty quickly. 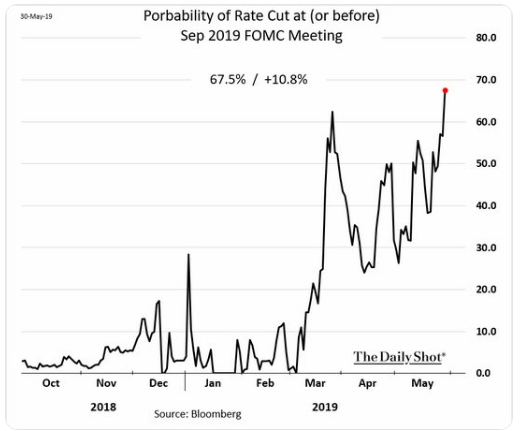 6. Bond Rally: Like a good golf partner you want them to perform well when you are playing badly. That's  what is happening now in diversified portfolios. Bonds are dinging while stocks are donging.  Bonds, as measured by the broadest index- the Barclays Aggregate Bond Index, were up close to 1% this week while stocks swooned. The Barclays Agg is now up close to 5% this year and we are not even at the year’s mid-point!  Tax free bonds are performing even better. Below you see the sharp recent move in the bond market as represented by the 20 year US Treasury bond. Bonds rarely sustain such steep rallies.

7. Investor Sentiment: Stocks are in the midst of re-pricing themselves given the perceived outlook for a protracted trade war and slowing economic growth. As mentioned above, typically we’ll see 3.3 instances during a year where stocks will correct 5% of more and the average intra-year sell off from the highs is 12-14%. We are now 6-8% off all-time highs, depending on what index you want to reference. Below we  show several tried and true sentiment indicator that are good guide posts to watch for a turn in the market. The Put/Call ratio hit an extreme 1.4 reading this week, meaning that investors were scared and buying a lot of protection in the form of put options. The American Association of Individual Investors (AAII) Survey is indicating a high degree of investor anxiety. The CNN Fear & Greed Index is at an “extreme fear” reading. These are times when long term investors carefully put cash to work. 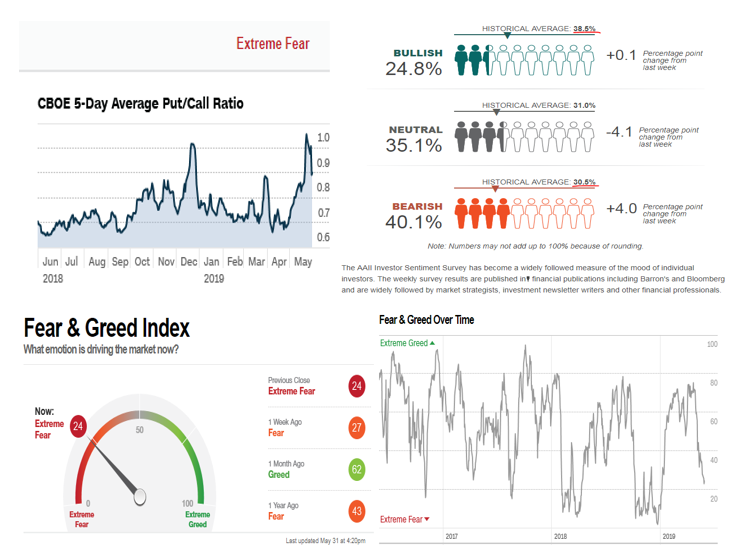