1. Weekly Market Update: Leading up to Friday, equity markets were chugging higher primarily due to feel good Federal Reserve comments (#2 below). However, due to German and broader European growth fears (#3 ), markets gave back all of the week’s gains and more.  Investors are asking…If Germany sneezes, does the US get a cold?  At the close of the week, investors were also concerned that interest rates could be too low (#3) and, of course, the lack of a trade deal (#4) also weighs heavy on our minds.  The best performing asset classes this week were rate sensitive assets.   Bonds were up .85% which is a very big one week move. MLPs were the star performer up 1.8%. The S&P 500 was .85% lower while most other indexes traded off by 1%-1.5%. Small cap stocks were off 3.14%

2. Fed Declares No More Rate Hikes: Fed Chairman Jerome Powell gave markets a dovish surprise Wednesday signaling no interest rate hikes for the balance of 2019. Powell’s comments led many to speculate that the next Fed move may in fact be a cut in rates.  Prior to his comments, the market had been pricing in one rate hike for this year and one for next year.  On the Fed statement, 10 Year US Treasury yields dropped to 2.52%, the lowest level in a year.  Mortgage rates followed the 10 year lower, reaching their lowest level in a year as well. Markets partied on this good news only until Friday when global growth fears came into focus with news of a slowing German economy.

3. The Downside to Lower Interest Rates…an “Inverted Yield Curve.” The benefit to falling interest rates is of course lower borrowing rates for businesses and consumers. However, when interest rates fall too much... and when short term rates dip below long term rates (the definition of an “inversion”), investors can get spooked. 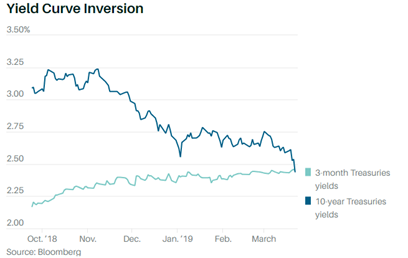 That’s what happened on Friday. An inverted yield curve can signal a slowing economy. However the signal is not always accurate and historically stocks can continue to do well after an inversion. Barron’s explains an inversion like this:  “If bond investors are bullish on the economy and believe interest rates will go up, they are more willing to hold short-term bonds and hope to harvest the higher yields later on. On the flip side, if bond buyers believe the economy is heading downward and interest rates are likely drifting lower, they’d prefer to hold the longer-term bonds in order to lock in the current higher yields. In that case, the higher demand for longer-term bonds will drive up their prices and lower the yields. Yields on long-term bonds are usually higher during economic expansions because bond investors need more compensation to be locked in. But when the sentiment gets too bearish, the long-term yields can fall below the short-term yields.”  Whether this inversion lasts more than a day or two will be very key to watch next week.

4. The Main Reason for Friday’s Sell Off…. German manufacturing contracted further in March than expected as reported by the IHS Markit’s Flash Composite Purchasing Manager’s Index (PMI) which measures about two thirds of Germany’s economy. 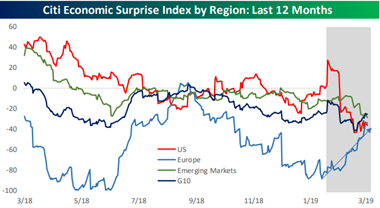 The index fell to a six year low 51.5 reading, which signals very slow growth, but still growth. However, the report compounded fears that unresolved trade disputes are exacerbating the slowdown in Europe’s biggest economy. What was most surprising about the Markit PMI report was that it contradicted other signs of European economic strength such as the recently released Citi Group Economic Surprise Index (See chart). The Citi index notes that European economic data has been surprising to the upside. The Citi report was one of the main reasons cited by Goldman Sachs and Morgan Stanley for turning bullish on Europe earlier in the week.

5. Trade Deal in 9th Inning, the final Push…: The back and forth over whether a trade deal between the U.S. and China is imminent – or even likely – continues, with American officials playing down the chances of a breakthrough soon.  U.S. Trade Representative Robert Lighthizer and Treasury Secretary Steven Mnuchin will travel to Beijing for meetings at the end of next week, and Chinese Vice Premier Liu He is expected in Washington in April. Markets are hinging on the prospect of positive comments next week. The current goal is to reach an accord after Liu’s trip, though President Donald Trump has said he wants a deal that can be enforced, not one that’s quick.

6. What to Watch for Next Week: A) The Mueller Report was delivered to AG William Blair late Friday. Markets, which have been treating this report as a non-event, could be surprised.  B) High Level Trade Talk chatter should come out toward the latter part of the week. Markets would love to hear good progress. C) Given the big impact of the German PMI this week, markets will likely key on how US manufacturing is doing as the Chicago PMI is released on Friday. Also next week we get important data on the US consumer (CPI, Consumer Sentiment, Consumer Spending). D)  From a technical perspective we’ll be watching closely how the S&P 500 holds its recent big gains. We’re due to give some more back at some point. E) Keep an Eye on the Yield Curve Inversion. Does it reverse?

7. What We’re Reading….These articles caught our eye this week: