This Week's 7 Things to Know About the Markets & the Economy

1. Weekly Market Summary: “Both Parties Want to Make This Deal Real and Meaningful” were the words of President Trump late Friday afternoon. This week gains were small but steady as the Dow and Nasdaq continued nine weeks of gains while the market digested softening economic data and awaited more good news on trade. This rally is reaching levels that are quite extended. The Dow has not been up eight straight weeks to start a year since 1964!  All major equity averages posted gains this week. Emerging Markets led the way +2.0% and Small Caps continued their tear, closing up another 1%. Small Cap stocks are now up close to 18% year to date. Next week will be particularly interesting as we will likely see more market moving news on trade and the US economy.

2. Trade: Friday President Donald Trump met Liu He, China’s top trade negotiator in an attempt to forge a preliminary agreement on trade ahead of the March 1 deadline for the imposition of new tariffs. 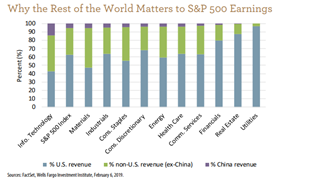 The President said Friday that: "A deal with China is more likely then not."  The Chinese delegation has decided to extend their trip for another two days which was seen as a very positive development. Earlier in the week China proposed to purchase $30 Billion more in U.S. agricultural products. Still, the economic damage economic from the standoff is mounting, putting further pressure on both sides to come to a deal.  Tuesday Trump said that the current March deadline is not a "magical date."  The table has been set for a fluid discussion beyond the deadline. However, markets will get anxious if more concrete details do not emerge soon. The chart above highlights the importance of trade for US companies. Upwards of 30% of S&P 500's earnings come from foreign trade.

3. Reassuring Fed Minutes: We got reassuring news from the Fed this week as they released the minutes from their January meeting. The overarching theme was "patience" in raising interest rates and tightening monetary policy further. The Fed's increasingly dovish stance was reinforced on Thursday when St. Louis Fed President James Bullard told CNBC that interest rate hikes and balance sheet reduction are "coming to an end." Bullard told CNBC that the Fed had paid close attention to the "bad reaction in financial markets" to December's Fed rate hike, which was seen by investors as a potential step towards recession. These reassuring comments were helpful because this was not a great week for economic data.  The data suggested that growth is slowing but not stalling.

4. Interest Rates… UP or DOWN?  Watch the Data: The Federal Reserve is “Data Dependent” and we know it is unwise to “Fight the Fed.”  So what’s the data say? This week the economic data came in below expectations indicating a slowing, but not stalling, economy.  Durable Goods, Leading Economic Indicators and the US Manufacturing Purchasing Managers Index (PMI) were just a few of the reports that told us that the economy has slowed. Next week will be an important week as we look for directional signs from three key economic releases: U.S. consumer confidence on Tuesday, U.S. gross domestic product on Thursday, and U.S. ISM Manufacturing PMI on Friday. We liked this quick summary from Economist Elliot F. Eisenberg, Ph.D. who summed up how pending data will affect the path of interest rates (and asset prices): “Rate Realities: If 2019 real GDP growth is 2%, inflation holds at 2%, and unemployment falls no lower than 3.7% such that Y-o-Y wage growth stays around 3%, the Fed keeps rates unchanged. If growth rises above 2.3%, and unemployment falls below 3.5%, then we get one quarter-point rate hike. But, if growth dips below 1.75% and inflation weakens, we'll see a quarter-point cut. The potential moves, while small, are critically important.”

Despite signs of an economic slowdown, the industrial metal used the most in manufacturing and construction, is indicating that the world economy is headed north. Typically the price of copper is a very good indicator of where the worldwide economy is going.  The breakout in copper prices is quite interesting as it indicates a strong economy ahead while the numbers being reported right now indicate otherwise. The moniker “Dr. Copper” stems from the fact that the price of copper has tended to be a better predictor of the economy than the predictions of most economists. 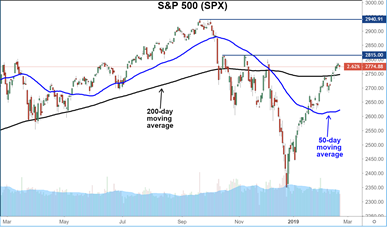 After a late-year slide that bottomed on Christmas Eve, the bear market in tech stocks is already over. Another way of saying it -- depending on your outlook -- is that a new bull market has begun. Of course, the working definition of a bull and bear market -- 20% up or down -- is all rather arbitrary. And it doesn't say much about where we're headed next. After eight consecutive weeks of gains, the Nasdaq Composite is now up over 21% since Christmas Eve. The broader S&P 500, which tracks the largest 500 stocks in the USA, also continues to trade in a sharp uptrend from the late December lows. This parabolic rise has seen the benchmark index break out above multiple resistance levels, including its key 200-day moving average. According to some technical analysts, this places the S&P 500 in bull market territory. Since the December lows, the index has climbed slightly over 19%. This puts it just short of the 20% from recent lows that other analysts see as the definition of a bull market. 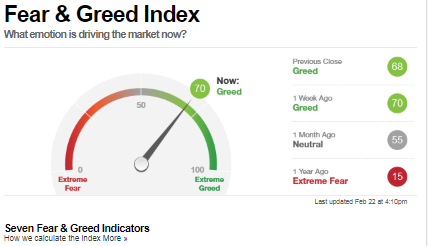 Just a reminder that we began to show CNN’s Fear & Greed Index in December when the indicator was flashing “extreme fear.” We are now solidly in the “Greed” zone after a large rally off the December 24th low. We’re not calling for a major decline here, just noting that the public often gets excited after the “easy money” has been made and gets fearful near bottoms.