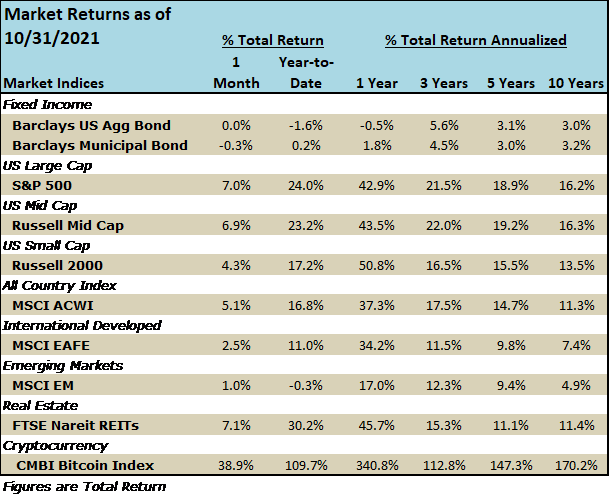 The major indexes returned to their upward trajectory after a pause in September.   Fresh new highs were hit for most major U.S. indices at month end.  The S&P 500 was the major winner, rising +7.0% in the month! Propelling equities was a confluence of good reports on corporate earnings and the health of the consumer coupled with disappointing reports that the markets liked to see, such as a tepid monthly employment report and a weaker than expected producer price index (PPI) read.  Though disappointing on the surface, the employment and inflation reports created a sentiment that the Fed had more time before they start to increase interest rates.

Within the S&P 500 Index, we see from the table below that five main industries contributed to the strong monthly return.  It’s not surprising that the energy sector would be a strong performer in the same month that oil prices reached a new 7-year high.  But even better than the energy sector in October, was the consumer discretionary segment.  Consumer discretionary companies reported strong third quarter results for the most part (see Amazon, Walmart, Ford, Best Buy, etc).  In addition, various reads on the American consumer (retail sales, credit card spending, savings rates) also pointed to the continued health of the consumer whose spending represents nearly 70% of the U.S. gross domestic product. 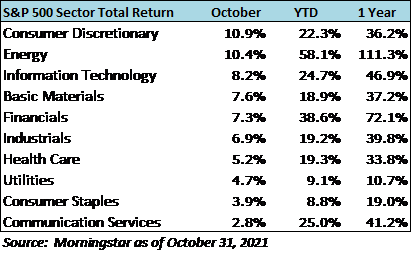 International indexes, while positive in October, had modest returns that could not keep up with the strong U.S. markets. Typically, when growth style stocks outperform, like they did in October, U.S. equities do better than their international counterparts.  This is due, in part, to the make-up of the economies in Europe and emerging markets that have a larger concentration in financials and industrials and lower weightings in technology and consumer discretionary stocks within their respective indexes.

China’s stock market fell slightly in October contributing to the mediocre emerging market index return. China’s GDP for the third quarter showed a steeper slowdown in growth at +4.9%, than the 5.3% read most economists expected.

Bond market results were flat during the month, as interest rates barely moved (bond prices move in the opposite direction of rates).  The 10-year treasury yield ended the month at 1.55% versus the 1.53% at the start of October, rising only 2 basis points.   However, on the shorter-end of the curve, the 2-year treasury yield rose over 20 basis points in October.  Thus, the yield curve flattened quite a bit in October.  The rise on the shorter end of the curve was a function of the market thinking that inflationary pressures are here to stay.

On the municipal side of the bond market, we did see a change in dynamics this month.  October typically brings a heavy of supply of new issues, but less demand for them, leading to higher rates.  This October, demand was more sluggish than normal, prompting issuers to price bonds to sell.   As a result, the Bloomberg Muni Bond 10-year Index fell -0.39% during the month. Weakness was also seen in mutual funds flows which were barely +$3 billion for munis in October, compared to a year-to-date monthly average in 2021 closer to $10 billion.  Despite the difficult month, municipals have fared better than government and corporate bonds with the year-to-date muni index up +0.2% compared to the Bloomberg Aggregate down -1.6%.

October also brings a flurry of third quarter reports by publicly traded companies and with it, a great read on what CEOs think the economy is doing and expected to do in the upcoming quarter.  In three weeks, hundreds of companies reported their quarterly results and provided insightful views.  One resulting anecdote was the continued ability of companies to pass their higher input costs along to the consumer.  Thus far, the consumer has absorbed higher prices without a resulting decline in demand for those goods. This news was well-received by the stock market.

We heard from several retailers that holiday spending is expected to reach a new peak this year as high consumer savings rates and pent-up demand are no match for the perceived “barren shelves” we’ve been warned about.  Strong demand for goods over the next few months prompted Amazon to announce plans to hire 150,000 workers for the holiday season.  Peeling back the personal consumption spending patterns shows how goods have enjoyed a strong rebound, but services are still below trend (see chart below).  This is why some economists remain bullish on the U.S. consumer in 2022, as there is still spending to be had in the service area of the economy.

We also heard from auto industry management teams that the microchip shortage hurting production was expected to ease in the back half of 2021.

October provided us with the third quarter GDP growth figure for the U.S. at 2.0% growth.  While a slow-down from prior quarters’ rebound from recessionary lows, it is not a terrible print.  It shows the U.S. moving from a rapidly expanding economy to one in mid-cycle growth.

The Federal Reserve will meet in early November and the markets fully expect the Fed to announce the tapering of bond purchases starting this month.  The news should be a non-event since the market has already anticipated this action.   The Fed funds futures (a read on when the market thinks the Fed will start raising rates) are now pricing in an 80% chance of the first interest rate increase in June 2022, according to bond manager, GWK Investment Management (formerly Gannet Welsh & Kotler).

Intra-and-inter party squabbling in D.C. has muddied the waters for the infrastructure bill.  It is unclear which version Congress is working on at this point since many of them are not made public, but the dollar figure has been reduced each time we hear about the bill’s cost.  We dive into the latest state of the legislation in our other monthly piece titled “Build Back Better”, which can be accessed here.

More inertia occurred in Washington regarding the debt ceiling, where Congress “kicked the can” of the debt limit deadline from October 18th to December 3rd, by making some on-paper adjustments to the figures.  Again, we note that the U.S. has never put itself in a position to default on its debt, and we don’t see this happening now. However, as we come closer to a looming deadline; markets could get squeamish.

The Delta variant strain continues to show a downward trend of cases both in the U.S. and worldwide.  The decline in cases is not steep, but it is going in the right direction.

Getting the pandemic behind us is key to moving forward, and perhaps this chart below may be a sign that we are finally getting back to normal. 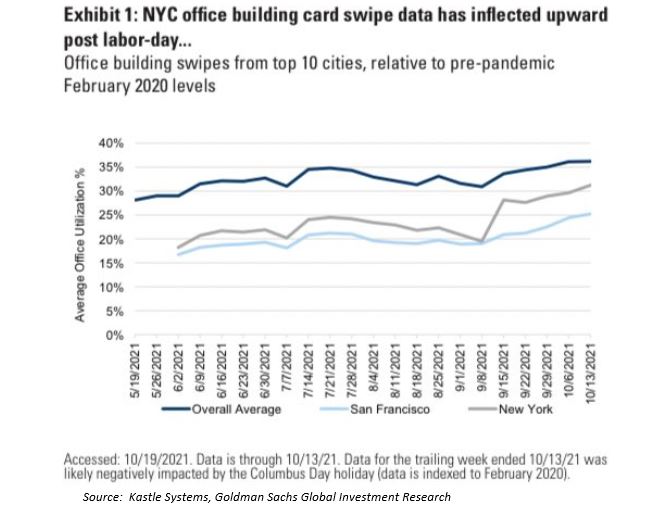 Additional good health news came on the first of October from Merck.  The pharmaceutical giant’s phase three results of a pill used to treat COVID-19 patients were so compelling that it stopped clinical trials and started seeking emergency use authority by the FDA.

Lastly, the CDC will vote on Tuesday, November 2nd to approve first-time vaccines for children ages 5-11.  Hopefully, this will be a reality by the time this piece is read.

We weathered a decline in the stock market in September and got a nice equity rebound in October, pushing the S&P 500 to its 59th record close of the year and on pace for a strong double-digit return.

We still have unresolved issues on major infrastructure legislation and tax increases that will factor into market dynamics along with another debt ceiling showdown in Washington.  With markets at record highs, it would not be unusual for sentiment to ebb a bit.

Our next monthly market recap will take place after the Thanksgiving holiday, so we wish all the best for you and your family.