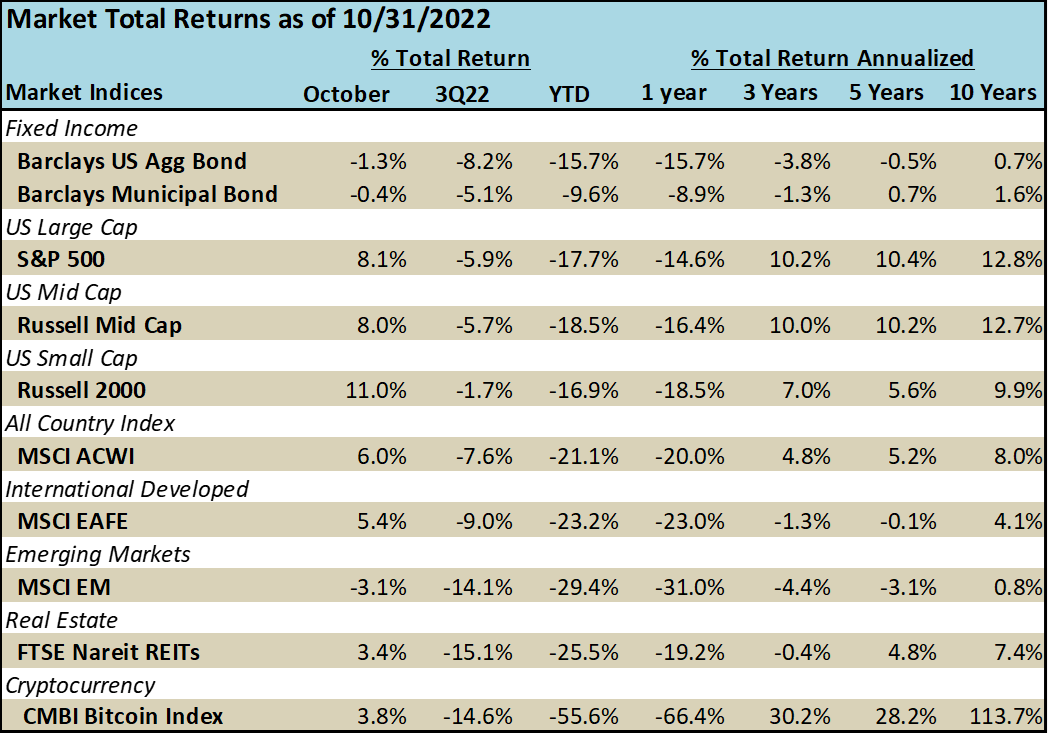 Equity markets stayed positive all month despite slowing economic data and muted earnings reports.  All major U.S. equity indexes were up with the only negative monthly return seen in emerging markets, down -3.1%.

Positive market reactions to corporate earnings, 3rd quarter GDP,   and the possibility of a Fed pivot likely propelled stocks during the month.

Quarterly earnings were once again “better than feared,” and the market applauded.  There were some tough reports in technology (Meta lost 24% of its value in one day and Amazon’s outlook for the 4th quarter made for a down 17% day for this bell-weather name).   Additionally, many firms are citing slowing ad demand (Alphabet), weak microchip demand (Texas Instruments), and softer consumer outlook for the important holiday months (Mattel).

Financial companies started off the reporting season and did well and we received anectodal evidence that the consumer is still demanding products and services, despite paying higher prices.  Proctor and Gamble was able to raise prices 17% during the quarter without negatively affecting volumes.  How long this will last is an unknown.

Energy sector was once again the sector with the best one month return as names like Exxon Mobil reported extremely strong earnings against the backdrop of higher prices.  Industrials had a good month as well with names like Catepillar, which reported third quarter earnings much better than expected, and forecasted robust demand on the horizon.  Catepillar stock rose an impressive 32% for the month.

Given the strength of three main value sectors of the economy (energy, industrials, financials), it is no surprise that value stocks again bested growth stocks. The Russell 1000 Value index rose 10.3% during the month compared to its growth counterpart, up 5.8%. 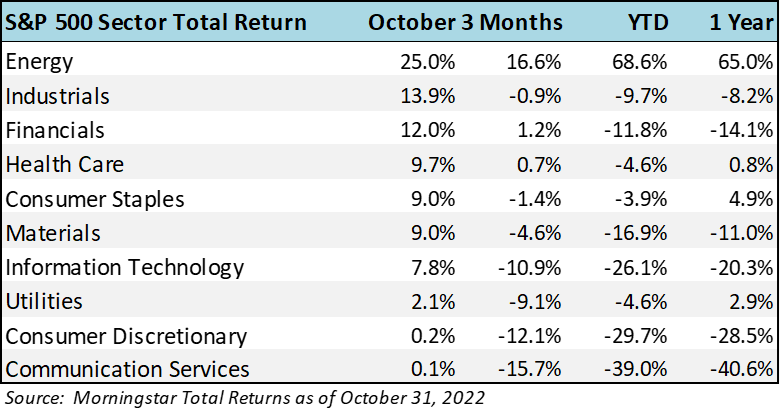 While 98% of Conference Board CEOs are calling for a recession in 2023, collectively analysts are still expecting 6% earnings growth for 2023.  We should expect to see 2023 earnings estimates come down to more realistic levels given the Fed’s goal to slow the economy.

We can point to a few indicators showing that some of the growth in the economy is starting to slow.  Business investment is falling, labor demand is slowing, and housing (a key component of CPI) is falling fast.

Another key measure is money supply growth which is now growing at only 2.6%, down substantially from its high of 27%.  The graph below depicts both CPI and Money Supply growth, leading one to conclude that CPI is about to fall from its current peak.

Inflation was again the biggest economic report of the month as investors are struggling to find any good news to make the Fed pivot its aggressive rate hike stance.  Unfortunately, they did not get it from the CPI or the PPI which both rose a bit more than expected and likely are the reasons the Fed will continue to raise rates.   The market quickly priced in another 0.75% rate hike and the Fed delivered.

The Fed raised rates by the expected 0.75% and made some commentary that the market’s did not appreciate.  Mainly, Chairman Powell did not mention that the Fed would pivot from the current tighentening policy in place.  Instead he made the following comments in his press conference:

After a strong October market rebound, it was not surprising that equity markets fell during the afternoon of November 2nd as Powell’s comments above were telegraphed.  However, we believe the next 4-6 months will show the Fed what it has been trying to achieve; reduce inflation through slower growth.  We believe the worst of the market declines are behind us, but we are still see volatility playing a big part in returns in the near-term.