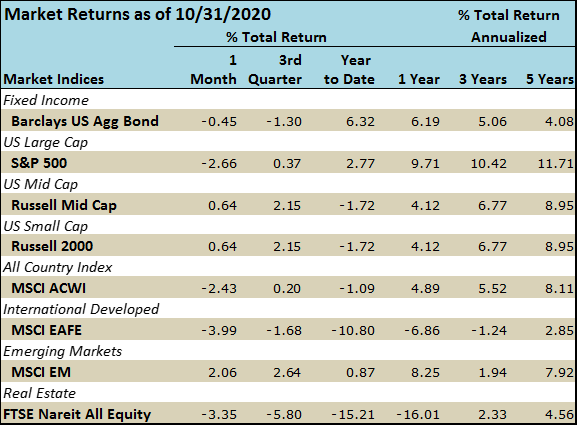 NOTE:  Given the early November publication timing of this October write-up, many important events occurred after the month-end and are also included herein.

That was Pfizer CEO’s quote on Monday morning, November 9th when the company publicly announced the phase 3 trial results for its COVID-19 vaccine.   Efficacy results of more than 90% surprised even scientists working closely on a COVID solution.  We’ll get more data in a few weeks out of Pfizer and likely hear about Moderna’s phase 3 results which are using the same RNA technology.  Pfizer’s news is a significant breakthrough that will help bring a worldwide global crisis under control.  Obviously, markets reacted favorably when Pfizer released the news and the Dow Jones Industrial Average jumped over 800 points (+2.9%) while international equity markets also applauded the news with various European major indices up +4.0-7.0% on the day.

COVID-19:  Despite great news on the vaccine front, we are facing a second infection wave and record daily cases in the U.S. and worldwide.  Scientists offer bleak outlooks unless we continue to be vigilant with our precautions.  We have passed milestones we wish we hadn’t:  over 237,000 American COVID-19 deaths and over 1.25 million worldwide deaths since the outbreak began. 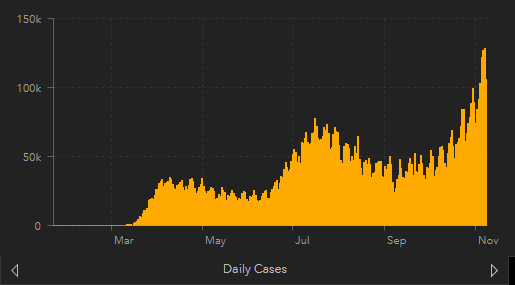 Polls heading into 2020 election gave Biden a strong lead over Trump and a good chance of a Democratic, “blue wave” majority in Congress.   Once again, the polls were misleading and wrong.   What we now know days after the election was that the Congress will likely remain divided with Democrats keeping a smaller majority in the House and Republicans keeping a smaller majority in the Senate.  Markets rose on November 5th in what we would call a “relief” rally as we have some clarity on the make-up of our government and have removed the “unknown.”   Markets loves certainty.

In addition, Wall Street likes “checks and balances” which limits either party’s agendas and removes the likelihood of dramatic policy changes.   Biden’s tax policies will likely be tempered and may have more difficulty succeeding under a divided Congress (pending two run-off senate elections in Georgia).   The dimming prospects of significant tax increases, for both corporate and personal income, provided a relief rally.

In a divided government, we typically get less policy action given the inability to get the legislative votes needed. Thus, gridlock can be good for equities.  It’s worth noting that since World War II, our country has had a divided government 62% of the time and been able to grow the economy and the stock market.

OCTOBER EQUITY MARKETS:  Equities took another breather in October as rising COVID cases, no stimulus legislation, and impending elections were a recipe for a nervous market. The NASDAQ finished the month at its lowest level, down 9.5% from its recent September all-time highs.  Mid and small capitalization stocks fared better than the large company counterparts, but we suspect that is mostly a function of sector performance.  As you can see from the graphic below, technology accounts for a bigger portion of the large cap index (S&P 500), than the small cap index (Russell 2000).   Not only were technology stocks within the S&P 500 down -5.1% during October, but the small cap index’s largest sectors (healthcare, financials and industrials), were all down less than technology providing an overall better one month return versus the large cap bell weather index. 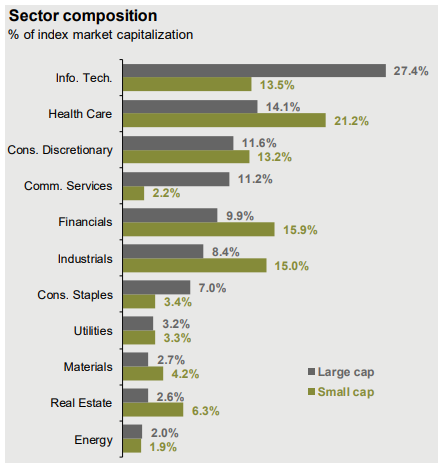 On the international side, we saw a large sell-off mostly of European equities as E.U. leaders began closing down activities in France, Germany, Italy, and U.K. to name a few.

In early November, we saw markets rise two days before and three days after the election.  Not a typical move in front of a hotly contested election year and we still had no definitive word on who won the presidency.  Markets were poised to open up on Monday, November 9th as we got clarity of the Biden win and then the vaccine news hit adding materially to the day’s gains. As of Monday’s close, the S&P 500 rose more than 10% in the first six trading days of November.

In addition, volatilitiy fell sharply after the election (VIX fell 44% from October 28th high) pointing to an equity market that could stay in an uptrend.  The reduction in volatility creates a “green light” of sorts for macro investing models to moving back into equitiies.

OCTOBER BOND MARKETS:  As of October 31st, bonds were poised to beat stocks for the year.  The Barclays Aggregate Index notched a 6.4% return year-to-date through October versus the 2.8% return for the S&P 500. This would be the third time in 10 years that bonds outperformed equities. The yield curve steepened during the month of October as the bond market anticipated some action on a stimulus bill post-election. The Fed continued to hold down short-term yields and the 10 Year Treasury rose 0.18% (18 basis points) to end October at 0.86%. The 10 Year Treasury yield has been in a range of 0.55-0.90% since April, so the rise was nothing dramatic.

OCTOBER MUNIS:  As with Treasuries, municipal bond yields also moved higher in October as seen by the yield graph below with the 10-year AAA munis up 10 basis points from last month and the 2 year up only 5 basis points. With yields rising, prices fell modestly in October. As with prior months, the demand for muni paper was strong in October with the market easily digesting $65 billion of paper. The month’s issuance was stronger than normal likely due to sellers wanting to get ahead of the election month and potential volatility associated with it. Municipal mutual funds flows were again positive for the month, adding $5 billion to funds’ assets.

Municipalities are anxiously awaiting, but seemed optimistic, at receiving indications of direct Federal aid that could help their strained budgets. The good news for most states and local governments is, that the first nine months, tax receipts were much better than the dire predictions assumed in early spring. The data is encouraging, though it does not reflect the full year nor the effects of spiking COVID-10 cases we are currently seeing nation-wide.

GDP during the third quarter rebounded to +33.1% after a staggering -31.4% in the second quarter.  As a reminder, looking at these percentages can be deceiving.  To get back to where we were just last year (10 months ago) we would need an annualized GDP growth factor of +53.3%!  Thus, while the third quarter figure looks great on the surface, there is still a long path to economic recovery.

As you would expect with that type of GDP figure, the economic news that trickled out during the month was upbeat. Housing continued to be a bright spot with increased permits and existing home sales.  Jobless claims fell most than expected and manufacturing indexes for both service and composite continued to show economic expansion with the indices over the 50.0% mark.    The caveat is that all of this was happening while a large second wave of COVID-19 cases were hitting the U.S. and it’s difficult to determine what impact that might have on fourth quarter economic activity

The fourth stimulus package never saw the light of day with partisan bickering taking center stage.  There was optimism that a large package can be quickly negotiated in Washington after the election.  One of the first public comments from newly re-elected Mitch McConnell, Senate Majority Leader, was that he wanted to see a stimulus bill before month end.  Markets are applauding this move as well, but the follow-through is key.  As the chart below shows, new job creation has slowed in recent months as businesses face uncertainty heading into winter. Without a stimulus bill, we believe employment numbers will continue to weekend and the U.S. could do some permanent damage to our small businesses around the country. 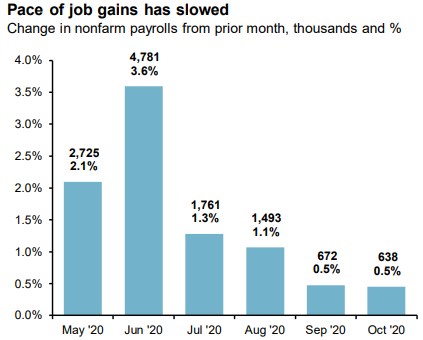 Before we add more debt to the U.S. balance sheet, it is interesting to see where we were in other quantitative easing periods and compare how much we’ve needed to inject into the economy to bridge us during this time of forced economic closure. The Fed action is just seven months old (yes, it feels like years), but the scale of balance sheet additions, over $3.0 trillion surpasses other crises with longer expansion periods by a factor of 2x. 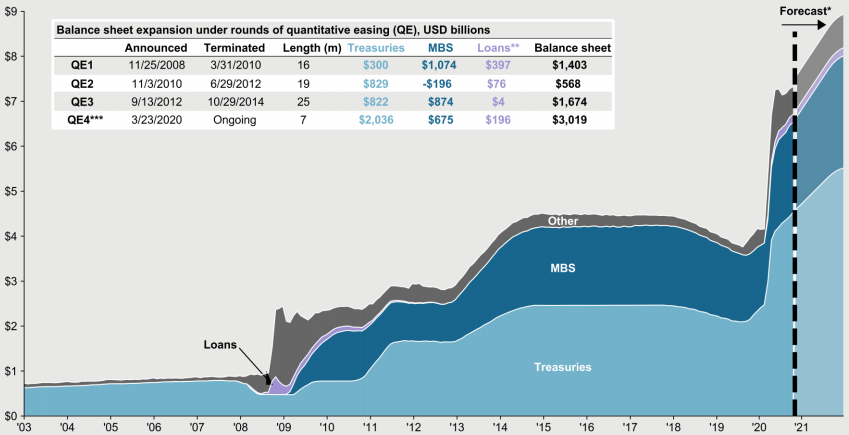 We were elated to wake up on a Monday and have certainty on two major macro fronts:  the elections and a COVID-19 vaccine.  Markets love certainty and the knee-jerk reaction to both major events are quite rational, though the enthusiasm may wane a bit as we turn our attention to COVID spikes, stock valuations, and stimulus efforts.  We see more light at the end of the tunnel and think we’re at a point of market clarity to put excess money back to work, but will balance this with an eye on valuations.