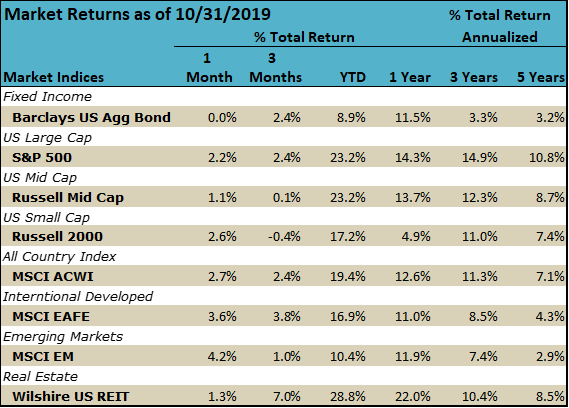 No one seemed nervous about “The October Effect” this time around as the bell-weather S&P rose 2.2% in the month.  The phrase came to be when many traders perceived stocks to decline during October (both 1929 and 1987 crashes occurred in October).  Instead, third-quarter earnings reports came into sharp focus during the month to provide the market with some direction on demand, growth, profitability and outlook.  Mostly positive reports and projections thus far propelled the S&P 500 to a new all-time high on October 30th, when it closed at a level of 3046.77.

It’s no wonder with the risk-on mentality for the month that Emerging Markets topped the world indices with the best one-month performance up 4.2%.  That was followed closely by International Developed stocks’ 3.6% gain.  Small cap stocks came in third as the Russell 2000 index gained 2.6% in the month on top of a 2.1% return for September.

From a style perspective growth bested value this month which is a continuation of a multi-year long theme in the stock market.

Meanwhile the bond market digested its 3rd Fed Funds cut providing a slight steepening in the yield curve from the month before, with the short end of the curve falling and the long end stuck near 1.68%.  The spread in interest rates between the 2-yr Treasury and the 10-yr on Halloween stood at 17 basis points (0.17% difference) versus just 5 basis points between the two values at the end of September.  Thus, the bond market is not signaling an impending recession with a widening spread and a higher yielding long bond than short term bond

In late October, we got the third rate cut of the year, again by 0.25%.  Importantly, the Fed signaled it is now in a holding pattern or “pause mode” versus previous meeting outcomes when the Fed signaled a continuation of rate cuts.  Markets took the news in stride preferring to focus on Chairman Powell’s declaration that the Fed would not need to “raise rates anytime soon.”

October also brought us the U.S. GDP report of +1.9% growth which slowed a bit from previous quarters’ annualized growth of 2.0%.  We think the main take-away is that growth is slower but relatively stable, not a rapid deceleration which would cause recession fears.

Looking at other key indicator reported during the month do not give us major cause for concern:

We think volatility in the markets is here to stay.  After all-time records are notched we typically see some consolidation, and would not be surprised if equities pulled back slightly from these new levels.  In addition, with earnings season mostly in the past the market is likely to turn its attention back to trade negotiations, Brexit, and the impeachment proceedings.   None of these have much to do with company fundamentals, but will move markets nonetheless.

We can paint a picture of low-stable growth ahead for U.S. and some improvement in international growth for the year to come.  There are very few red-flashing warning signs in the economy today as we noted above.  However, we are about to turn the calendar on an election year that will probably carry with it more market volatility.  We often remind ourselves and our clients that with the right asset allocation and the ability to weather the near-term movements, we’ll come out ahead on the other side instead of trying to market time each dip and rebound.

As always, your Sandy Cove team is available to answer any questions about the markets or your portfolio. 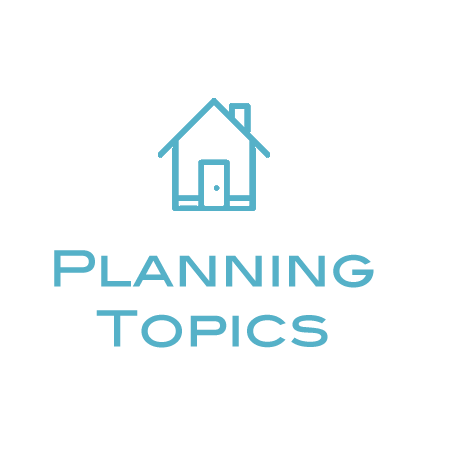