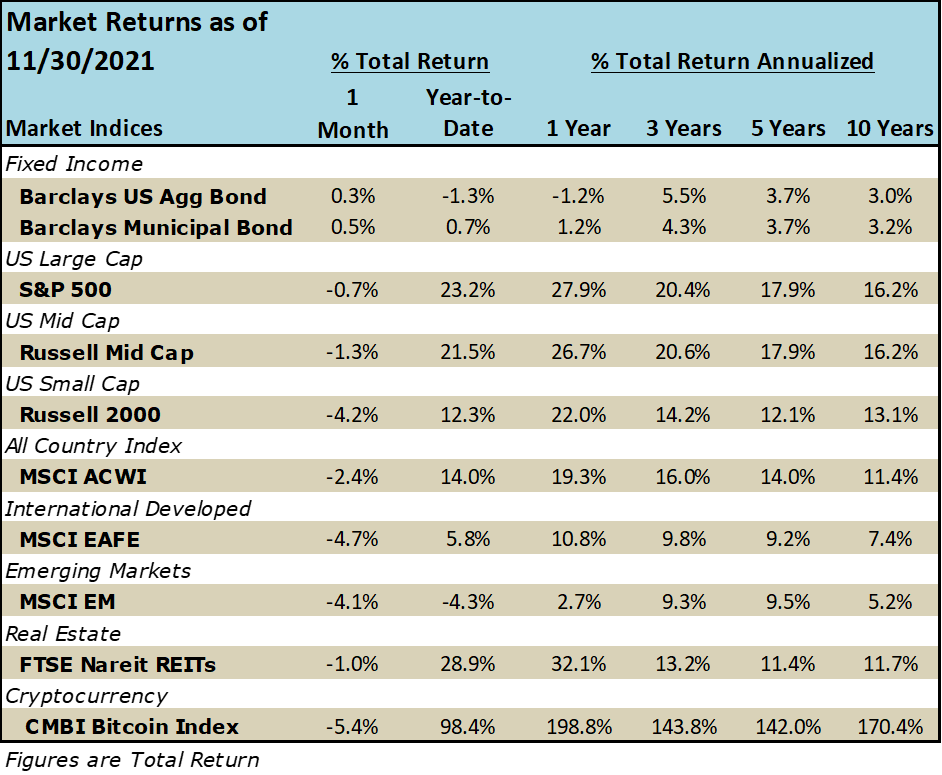 The major indexes continued the October rally in the first half of November until Thanksgiving when we got news of the Omicron COVID-19 variant.  Most indexes finished the month with negative returns, as seen from the table above. Hardest hit in the U.S. was the Russell 2000 small cap index, down -4.2%. International indexes also fell as there were reports of countries going into or considering another public lockdown to limit Omicron’s effects.

Positive returns at the beginning of the month were boosted by expected Federal Reserve tapering, Congressional passage of the infrastructure bill, news of new COVID-19 treatments, and a promising outlook for retail consumption. Then volatility hit the markets during the final trading days of the month mostly attributable to Omicron and its unknowns.

Within the S&P 500 Index, we see from the table below that the “reopening” returns have somewhat reversed. The markets remember the lockdown environment well and sold off certain sectors in preparation for fresh restrictions.   Technology and consumer discretionary were given a positive boost while energy, communication services and financials fell out of favor. 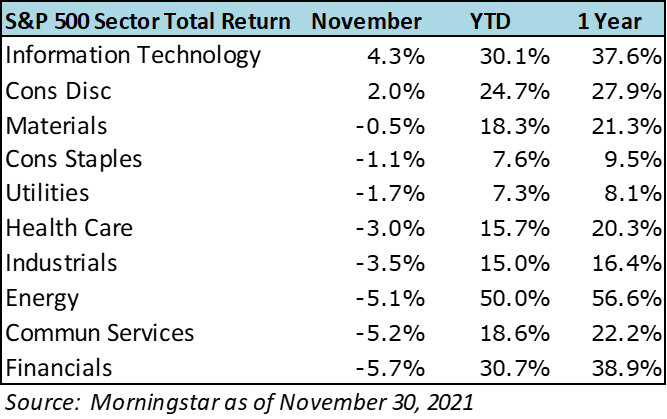 International indexes showed the effects of Omicron and fell in November. Austria was the first country to announce a full COVID-19 lockdown. Comments from Moderna’s CEO that the current vaccine may not be as effective on Omicron caused most European markets to sell off. The negative equity returns came despite solid Eurozone economic data (PMI rose to 55.8).

It was a volatile month in fixed income. Bond market indexes showed price gains in November as interest rates plunged in response to, once again, COVID-19 news. The 10-year treasury rate was down to 1.4% by the end of the month and had one particular day (Black Friday) in which the rate fell 16 bps – its worst one day move since March 2020.  While the fundamental picture in the credit and investment grade bond markets were little changed, the monthly moves were much larger with spreads on investment grade and high yield bonds widening.

During Powell’s testimony to Congress on November 30th, he signaled that he was considering accelerating the tapering of bond purchases as early as December. As markets do, they discounted the idea of a Fed tightening and the yield curve flattened, and equity markets fell. Currently, the market is anticipating two interest rates hikes in 2022. However, more news on Omicron (good or bad) will likely change the current view.

On the municipal side of the bond market, tax-exempt yields also fell and prices for the month rose, and the municipal bond index posted a positive 0.5% total return move in November (0.7% year-to-date). Demand for municipal bonds resurfaced making credit spreads tight, one again.

Retail companies reported third quarter earnings in November (they typically operate on a January year-end fiscal calendar). We got a mixed bag with some brick-and-mortar names like Gap and Nordstrom unable to deal with higher labor costs and supply chain issues.  Other operators like Target and Lowes were able to stay ahead of the cost curve and deliver strong results. Retailers are still optimistic about a strong holiday buying season. This optimism is coming, in part, from the current retail sales figures from October which showed a 1.7% increase. Despite a 6.2% CPI print, consumers are still spending and not letting price increases cut into their demand. 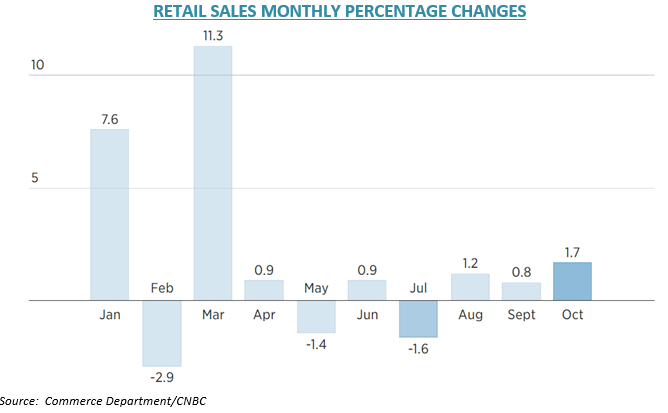 As noted above, the consumer pricing index (CPI) was much firmer-than expected, rising 6.2% from last October.  The report showed prices across a wide range of goods rose as consumers may have pulled forward some holiday buying. Prices also rose because of the supply chain pressures.  At the time, the markets took the higher CPI numbers in stride and the tech-heavy NASDAQ marched on with 11 days of increases after the inflation report. It’s interesting to note that the last time the CPI was this high at over 6.0%, the 10-year yield was approaching 8.0%!

The Federal Reserve met in early November and announced the plan to taper bond purchases just as it had telegraphed. Markets were also pleased to hear that Jerome Powell was nominated for another term as Chair of the Fed. Heading into December, Powell diverged from his normal tone and released a hawkish message: he has retired the word “transitory” in reference to inflation, and he is considering even tighter monetary policy changes.  This was necessary given that CPI figure for the 6th month in a row was over 5% signaling anything but “transitory.”

After months of negotiation, the Senate gave bipartisan approval to a $1 trillion infrastructure bill. This does not include the multi-trillion-dollar social policy bill (Build Back Better), which is proving to be more difficult to pass and is currently in the Senate’s hands.

Additionally, temporary government funding has extended the budget conversations until February, thus the headlines of the U.S. defaulting on the debt have been largely drowned out as our elected officials do seem to find a common ground on this issue.

Not only does our Covid section remain, but it may be included for longer than we had thought. The newest “variant of concern,” labelled Omicron, has been discovered within the borders of the U.S. At this point, details are limited on Omicron’s danger and/or vaccine-resiliency. Company executives are a mixed bag of optimism/pessimism when it comes to vaccine efficacy. Even if this variant proves to get the best of our current vaccine offerings, pharmaceutical companies predict that they can have up-to-date vaccines in a matter of a few months. What we do know is that so far, the symptoms seem to be mild.  Additionally, today we are better equipped to handle this new variant than the early days of 2020.

All eyes will be on the headlines of how dangerous and resilient the new variant is. Until we have a better picture, markets could go through more volatility in the coming weeks.

Supply-chain disruption, labor shortages and drought have given way to spikes in the price of Thanksgiving meals. This year, the average price of turkey hens was estimated to be ~40% higher than 2019.[1]  Did you feel the pinch? 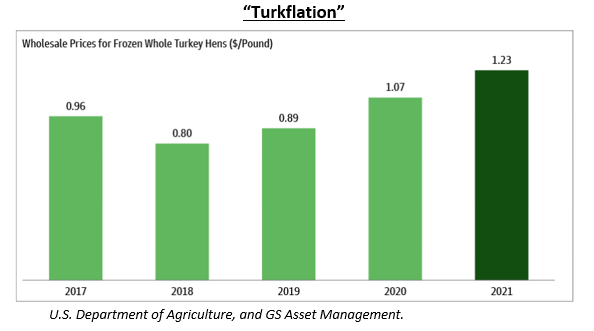 We can’t believe that it is this time of year again. We are close to finishing up 2021. It has a much different feel than last December and mostly all for the better. We wish you a wonderful holiday season this year and hope you will be spending it with family and friends dear to you.  We look forward to delivering our next market recap and our market outlook in the new year!