1. Market Recap: Markets enjoyed a relief rally this week on strong economic and earnings reports. Volatility remained high as Mid-Term Elections and Trade rumors kept investors weary.  Emerging Market Equities were the big winner, finishing the week up over 5% while all other major markets rose in the 2-4% range.

2. Midterm Elections Tuesday: We have four more days to grapple with election uncertainty. Republicans are likely to hold their 51-49 advantage in the Senate.  The biggest question is whether Democrats can gain the net 23 seats they need to take the House. This week President Trump did all he could to influence voters. He in the midst of an eight-state 11-rally final campaign push and is touting today’s very positive economic reports as proof of his leadership.  Trump restated his promise for a 10 percent tax cut for the middle class, now saying it will come next year, rather then ahead of the vote. Wall Street is backing Democrats:  For the first time in a decade, securities and investment industries are spending more on Democrats than Republicans. While some of that may be anti-Trump, much of the money is flowing to moderate Democrats who would be less likely to support harsh sanctions on Wall Street. On the other side of the trade, some veteran Wall Street types feel that a democratic swing could lead to more market weakness as they believe pro-growth business policies will be curtailed.

3. Trade Deal Chatter & Tweets: Markets have been on edge and quick to react to this week’s speculation of a thaw in US–Chinese trade relations. Trump says he wants a great deal with China while The U.S. is preparing to announce tariffs on all remaining imports from China by early December, should talks next month between President Donald Trump and Xi Jinping fail to deliver. Trump said late yesterday he thought the U.S. could make a “great deal” with China, adding the caveat that “it has to be a great deal as they have drained our country.” Policy makers in Beijing continue to try to cushion the country from the trade war fallout with tax cuts, regulatory relief and investment incentives as they try to avoid the debt-financed stimulus of the past. Thursday this tweet helped to get markets rallying: “Good conversation with Xi Jinping on US-China Trade. Discussed many subjects with a heavy emphasis on trade.”  Pressure is mounting for these two super powers to come to the table.

4. Earnings season has been stellar. Members of the S&P 500 index are on track to report average earnings growth of 26.3% for the third quarter of 2018- the best pace since 2010 with 75% of companies exceeding expectations. The average surprise for the S&P 500 is a beat of 6.4% – tied for the second best over 7-1/2 years (see the chart below).  If the stock market smells a recession coming, US corporations are not feeling it right now. Another positive: Total sales are up 8.2% from a year ago illustrating that earnings are real and not from financial engineering. 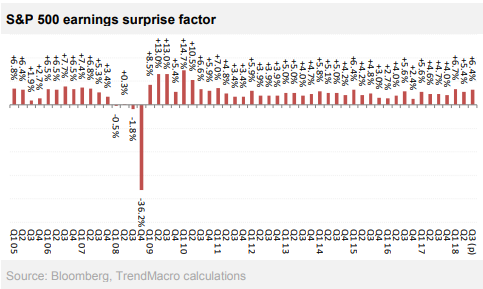 5. Value Signs: The S&P traded last week at about 15.6 times the next twelve months (NTM) of earnings, down from 18.3 times at the end of last year and below its five year average of 16.5, according to Factset. After the drops of the past few weeks, 93% of the markets in the MSCI World Index are trading below their 200 day and 50 day moving averages, according to BofA Merrill Lynch. The firm’s analysts recommend buying stocks whenever that measure exceeds 88%- WSJ. 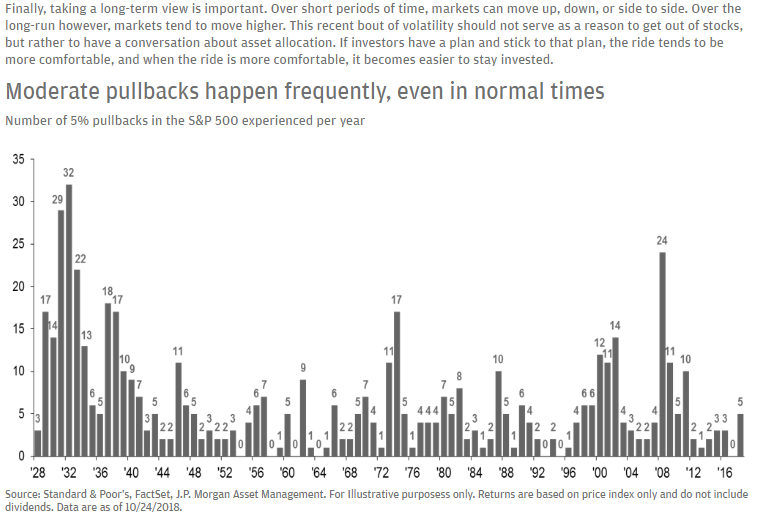 7. Friday’s Jobs numbers indicate that the economy is very strong. 250,000 jobs were added in October, way ahead of the 190,000 estimate and September’s number was revised upwards. Unemployment held steady at 3.7%, the lowest level in fifteen years.  Perhaps the best news came on the stubborn wage front. Wage growth was reported at 3%, a level not seen in over a decade. Why Wages Matters: Wage increases were the missing ingredient since the U.S. economic recovery began in 2009. The stock market was rising, unemployment was falling, and the economy was growing -  but wages were stuck. With inflation creeping higher and rising interest rates, there was plenty of concern that the economy was overheating and consumers were not going to keep up. Today’s report assuaged those concerns - for now - but economists and investors will need to see proof that this trend has legs. Given that companies are already benefiting from lower taxes, 2019 will be a real test of whether they will continue to reward their employees with their largesse