News Highs…Reasons to Be Cheerful

1. Weekly Market Update: The S&P 500 and the Nasdaq closed the week at record highs and the other major US average, the Dow Jones Industrial Average closed within 1% of its record close. Why the optimism? Three things. 1) There’s a very strong likelihood of a rate cut next week. 2) Corporate earnings, which were feared to be disappointing, are surprising to the upside. 3) Internationally, there’s progress on trade and less sabre rattling in hot spots like the Strait of Hormuz.  For the week, US Small Cap equities led the way closing up 1.5% and most other asset classes continued their upward trajectory. As our table below outlines, 2019 has been a very good year thus far!

2. What’s it Going to be a ¼ Point Cut or a ½ Point? If we don’t get a cut in the Federal Funds Rate on Wednesday, markets will be shocked. Fed Funds Futures contracts are pricing in an 80% chance of a rate cut.  Currently the Fed Funds rate, the rate at which banks lend to each other overnight, is 2.25%-2.5%. The big question is: Will the interest rate cut be for 50 basis points (1/2 point) or 25 basis points (1/4 point). Our bet: We get a 25 basis point (1/4 point) cut. Why? Second quarter GDP estimates came in above expectations today, the US economy does seem to be on solid footing and Europe’s economy is improving (see below #2).

3. The European Central Bank (ECB) had Bullish Comments This Week: The ECB kept interest rates unchanged, as expected, and indicated the potential for a rate cut some time later this year. However, ECB President Mario Draghi downplayed the need for more drastic easing measures by saying that the risk of recession in Europe is "pretty low." This language was somewhat of a surprise to analysts and economists who were expecting a more dovish approach.

4. Strong US Economic Numbers This Week… led by a better than expected 2.1% Gross Domestic Product (GDP) report. While 2.1% does not appear that robust at first glance, the number would have been 3.1% if not for falling inventories.  It’s a healthy sign when inventories are not piling up and companies are selling their products. Another positive sign, US factory orders for large manufactured items (Durable Goods) surged 2%.

5. Earnings:  Two weeks into the second-quarter earnings season, about 75 percent of the S&P 500 companies that have reported so far have topped profit estimates, according to Refinitiv data.

6. Tech Melts Up: Tech stocks overall have been especially strong as of late. Below is a chart of the Technology Select Sector SPDR Fund, which holds some of the largest technology companies. Like the overall market, XLK also hit a new all-time on this week. But its rise year to date has been significantly more dramatic than the general large-cap market. Since the beginning of the year, XLK has shot up a whopping 36%, significantly better than the S&P 500's still impressive 22%. 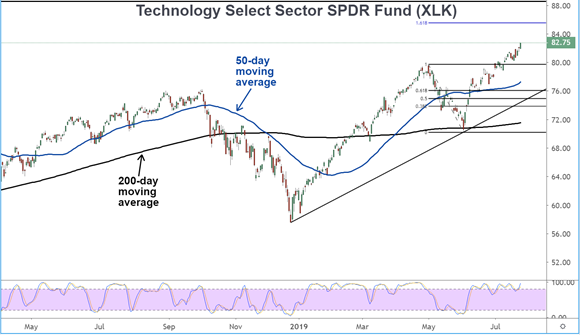 7. What to Expect Next Week: There could likely be some turbulence in the short-term as markets sort out the Fed rate decision when the FOMC meets mid-week next week. What markets expect the Fed to do, and what it actually does, will most likely be the major market mover for at least the next five trading days. Earnings results remain better-than-expected overall and U.S.-China trade meetings are expected to resume once again next week. These are both potentially market supportive. Next week is a heavy week for economic reports, we’ll get a good sense for the employment situation and consumer spending & confidence. The jobs and consumer reports have been fairly robust lately, one would expect the continuation of these trends.

• This Risk Could Wipe Out Everything You Own. How to Prepare (CNBC)- Katie

• If Demographics Are Destiny, Expect 15 More Years for the Bull Market (Barron’s) – Deirdre