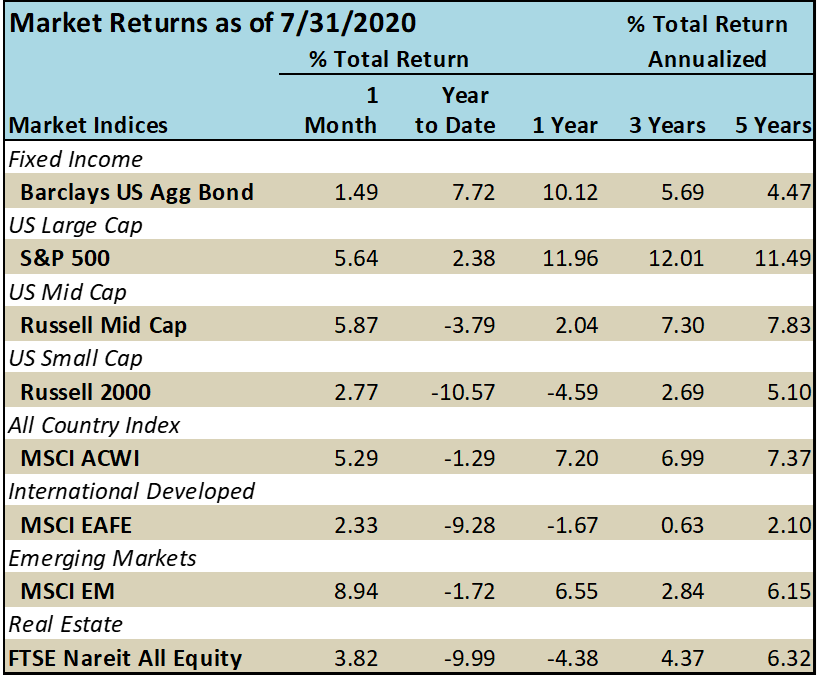 EQUITY MARKETS:  July recorded the fourth month in a row of positive equity returns around the globe.   The markets pushed higher despite the news of COVID-19 cases hitting new peaks in the U.S. and the inherent slowdown in economic activity in pockets of the U.S. as a result. The market, instead, continues to look forward and feed off the massive monetary stimulus created to bridge the economy through the pandemic.  If the economic data continues to worsen, the more confident the markets become that the government will have to step in for stimulus #4 in a big way.   Congress is currently at an impasse over the monetary size of the package, but even the pared-down $1 trillion stimulus is going to help further bridge the gap before we can start to return to a new normal.

To recap the month, the growth style continued to perform better than value.  Growth sectors such as technology, communication services, healthcare, and consumer discretionary were all relative winners.  The U.S. benchmark S&P 500 has 2.5x more exposure to technology than the rest of the world, which is why the U.S. markets have fared better in this environment.

On the international front, the surprise in the month was the strength in emerging markets which posted an 8.9% gain in July, but much of that was due to the weakening U.S. dollar

BOND MARKETS:  Interest rates hit record lows in July as markets digested the Fed’s commentary that rates will stay low for a long time to heal the economy.  Municipal bond mutual funds added $2.1 billion at the end of July,  marking the eleventh straight week of inflows.   Inflows year-to-date were a positive $3.1 billion from the -$21.8 billion outflow in March (see chart below).  Munis outperformed Treasuries during July driven by increase demand.  All eyes are on the 4th stimulus bill being debated by Congress and what aid it may provide to states/municipalities. 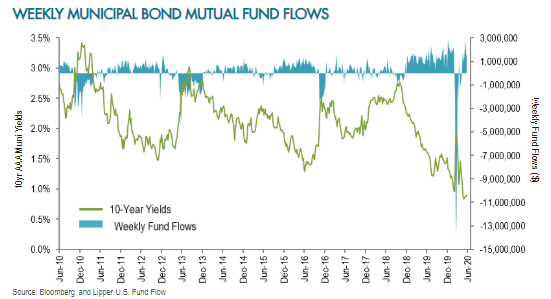 U.S. Treasuries yields also fell during the month as a risk-off sentiment began to take hold in the market after the weekly jobless claims increased to 1.42 million.   This comes after a steady weekly decline in joblessness until we began reopening parts of the economy.

CASH:  Despite the sharp rebound in equities, investors worldwide have been hiding out in cash/money market accounts.  The graph below shows the magnitude of money going into cash accounts that in the U.S. are earning about 0.01% return (and a negative real return after you factor in inflation). 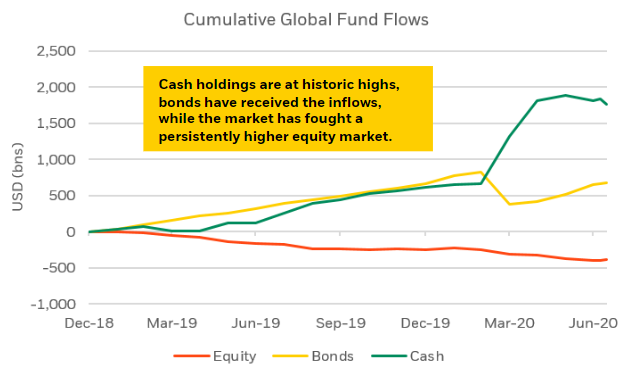 ECONOMY:  In the “this is not new news” category, we confirmed the U.S. indeed went into a recession with the second consecutive quarterly GDP decline in second quarter of -32.9%, annualized (1st quarter fell -5.0%).  This is no typical recession and might be short-lived.  As a rule of thumb, recessions end with a trough in jobless claims reports and a positive print on GDP (which most economists expect in the third quarter).  This is where the bulls don’t see the market disconnected from economic reality because when the economy comes out of a recession and enters a new business cycle, equities go up 100% of the time (see chart below). 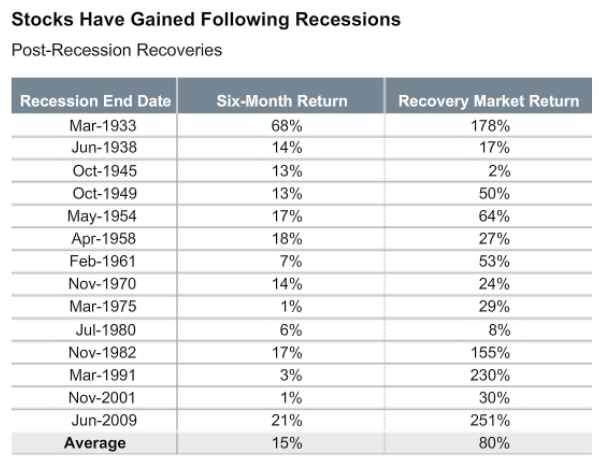 July also brought us second quarter earnings reports from corporations which surprised us, based on consensus thinking (though most companies pulled their forecasts). Overall, the U.S. economy is slowing maintaining its steady upward trend off a trough due mostly to strength in housing, manufacturing, and capital expenditure investment.  In addition, the secular growth themes in technology and healthcare continue to be a strong tailwind for those two sectors as evidenced by the NASDAQ reaching new historical highs.   We will keep an eye on jobless claims, payroll reports, and consumer confidence as indicators of the direction of the consumer in coming weeks and months.

FED & GOVERNMENT ACTION:  At the month-end FOMC meeting, Fed Chairman Jay Powell noted that the Fed needs to be accommodative for a very long time.  As if to emphasize this point, he quipped that he is “not even thinking about thinking about raising interest rates.”  The Fed sees core inflation falling to about 1.0% and believes the risk to dis-inflationary pressure is bigger than the risk of inflationary pressure at this juncture.

The growth of the money supply, the Fed’s balance sheet, and the fiscal stimulus already in place (with more to come), cannot be taken lightly.  It is the main driver of asset appreciation like equities.  The sheer size and speed is what is likely keeping the price momentum going.  The chart below illustrates this scale of this stimulus relative to other policy responses in economically challenging times. 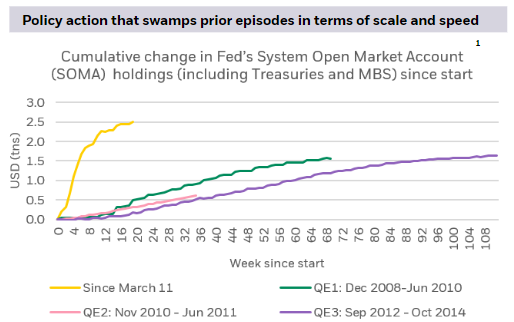 COVID-19:  Unfortunately, July has seen a meaningful uptick in the number and pace of cases.   We hit two difficult milestones in July of reaching 3 million confirmed COVID-19 cases and then 28 days later, reaching 4 million cases in the U.S.  During the worst lock-down month of April we saw a peak in daily cases of over 36,000.  In July, that figure more than doubled to 76,737 daily cases. 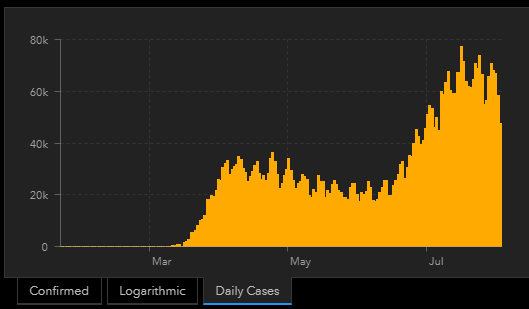 We also have seen the pace of infection increase as noted in the chart below. 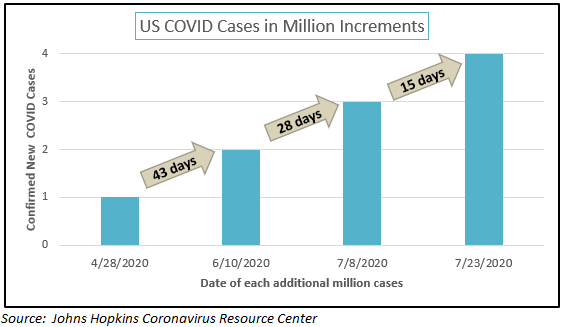 To make matters worse, we are not in the same predicament with other developed nations.  The list below as of August 3, 2020 ranks the countries by number of COVID-19 cases.   Despite our vast resources and medical know-how, we have the most COVID-19 cases in the world (yes, population size is not taken into account here, but our infection rate is higher than most developed countries, as well).

On the positive side, both the hospitalization rate and the fatality rate in the U.S. has declined from the initial spring outbreak due to better protocols and preventive actions. 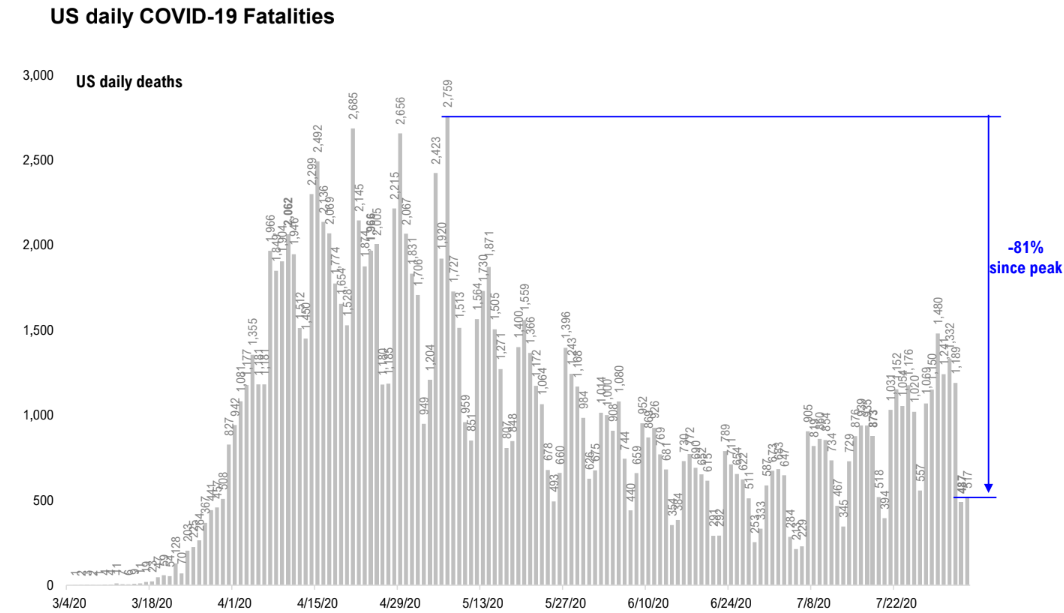 Lastly, there are six promising vaccinations in, or heading to, Phase 3 drug trials.  We are hopeful that the odds of one of the six of them being successful are high enough to provide good news before year-end.  Bottom line is that we absolutely need successful treatments options for the virus and an eventual vaccine for the world to return to a post-pandemic “normal” and for markets to be directionally “right.”

ELECTIONS:  As with past elections, financial markets tend not to focus on the elections until after Labor Day.  We expect markets to become increasingly jittery as this year we have both White House and Senate races to contend with, in addition to potentially not knowing the results on election night.  Additionally, where polls used to be a good indicator of which way the country was leaning well before election day, we know from the last Presidential election in 2016 that polls cannot be trusted.  One thing we can count on is the fact that markets hate the unknown and we have more than an average number of unknowns in this year’s elections.    We further vet out some truths about election year dynamics and how they influence markets in the short and long-term in our Election 2020 blog post this month.

SANDY COVE INVESTMENT OUTLOOK & PORTFOLIO POSITIONING:  For many clients we still have modest cash levels on the side-lines primarily earmarked for large cap U.S. equities.  We still believe that rising COVID-19 cases will force economic delays that are currently not being factored into the markets’ valuations.  Additionally, the markets will begin to focus on fall elections adding to volatility.

With history as our guide, we continue to believe the best defense for market volatility is a well-diversified portfolio consisting of geographic and size breadth.  Companies outside the U.S. continue to trade at attractive valuations and are not tied to U.S. economic or political policies to the same degree as U.S. counterparts.  Having exposure to non-U.S. companies is important in the grand scheme and also may hold better value in the interim months ahead.

Markets are forward looking, discounting entities that place higher expectations on smaller sized companies coming out of a recession and into the next business cycle. Thus, our long-term outlook on equities also benefits from having a variety of asset sizes (small, mid, large, mega) in clients’ portfolios.   During 2020 we reduced our real estate and emerging markets allocations and put some of that cash to work in smaller sized companies.

Even in these uncertain times, we still see long-term opportunities for our clients to be invested in both equities and fixed income assets.  We favor actively managed, selective investment approaches that have a keen eye on quality fundamentals and long-term secular trends that can reward investors with outsized returns.

As always, please reach out to any Sandy Cove Advisor colleague.