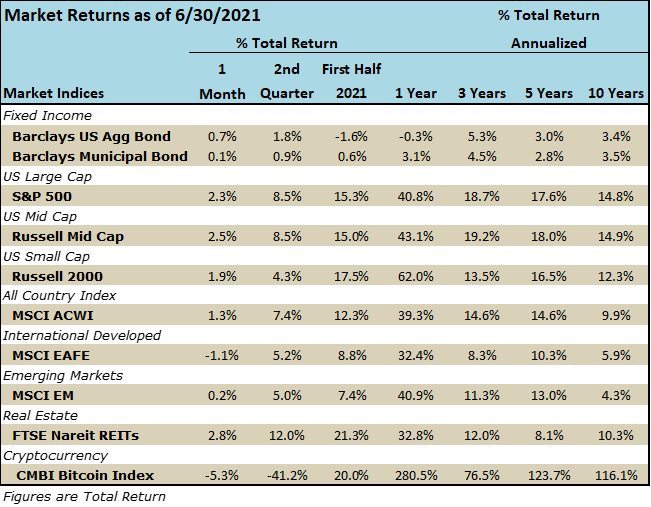 JUNE EQUITY MARKETS:  Despite the major volatility during and following the global pandemic in 2019, the S&P 500 has not had a 5% correction or more since October 2019.    This “boring” or “calm” market condition usually means a rising market and that has certainly been the case this year with the S&P 500 up 15.3% through June 30th.  It also brings out the day traders and market speculators because all they see is a market that only goes up.  However, there is a lot of movement underneath in the specific stocks making up the index.  As the year 2021 started, investors began to shift out of the high-flying growth stocks that worked so well during the pandemic (Zoom, Amazon, etc.) and instead favored shares of companies that would benefit from an economic reopening (American Airlines, Bank of America, ExxonMobil).  With massive liquidity created by the government, low returns for alternatives like bonds, and an economy rebounding nicely, the equity market has many reasons to move higher.   This has been the case all year and has resulted in heightened valuation for stocks and other major indices.  Using the S&P 500 as a proxy, you can see from the table below that valuations are elevated, no matter which metric you use.

The first quarter of 2021 was dominated by the re-opening, aw we saw value style investing outperform growth. The opposite was true in the second quarter and muted 10-year bond yields allowed growth to shine once again.  The table below ranks the 10 economic sectors of the S&P 500 from best to worst 2nd quarter performance.  You can see that technology and communication services produced strong results.  Energy stocks were another standout as the price for a barrel of oil has doubled in 12 months and flirting with $75/bbl. 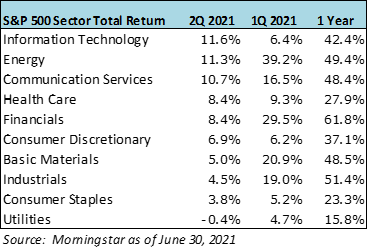 JUNE BOND MARKETS:   The yield curve flattened during the month as longer dated interest rates dipped in June (down 14 basis points).  As of this writing, July 7th, the 10-year treasury yield sat at a 5-month low of 1.30%.  The bond market could be signaling a few things: 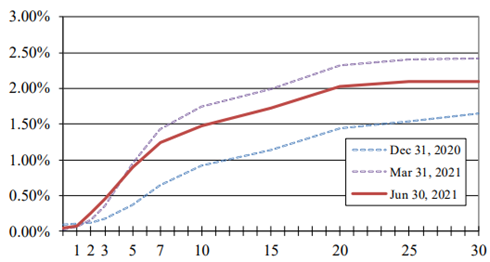 The Fed left rates unchanged again at its FOMC meeting but mentioned it could see two potential rate hikes in 2023 versus 2024.  However, Fed Chairman, Jay Powell, was not very convincing about the tightening monetary policy and said the Fed was only “talking about, talking about” tapering its monthly bond purchases.

Munis continued to be the bright spot in fixed income.  Credit fundamentals remained strong and demand for municipal paper was high.   Municipal fund inflow was $60 billion in the first half of 2021, a record inflow for six months.  Strong trends should continue through the summer as a large amount of cash, $165 billion, will be available for reinvestment from bond maturities, coupon payments and bonds being called.

GREAT INFLATION DEBATE:  As summer heats up, so to does the debate about whether inflation is transitory or longer lasting. You hear about rising prices and see it in everyday life so it’s no wonder it is the topic of much conversation.  As we mentioned in our write ups over the last few months, the Fed’s preferred inflation measure is the Personal Consumption Expenditures (PCE) Index.  As the chart below shows, there is clear upward trend in those month-over-month figures.

During the last FOMC meeting in mid-June, the Fed acknowledged what we were all seeing:  an increase in inflation data as the economy improves.  Further, the Fed increased its inflation forecast from 2.4% up to 3.4% and signaled it could start to raise rates in 2023 versus its prior projection of 2024.  The Fed maintained its long-held position that despite the price hikes, inflation is temporary.  There are many, including us, that believe inflation could be more permanent and that will come via wage growth deemed necessary to get people back into paying jobs and help keep them there.

ECONOMY:  We highlight a few economic indicators reported in June below to provide some context.

We believe the uptick in the June employment report was from states removing the extra federal unemployment benefits in response to COVID-19.  By August the added benefit is phased out and should provide a stronger boost to employment numbers reported in August and September.

GOVERNMENT ACTION:   The infrastructure bill, (The American Jobs Plan) has hit a few more roadblocks as both parties are trying to pass it in a bipartisan manner.  The Biden-led proposals are meeting some resistance among his own party (Senator Manchin of WV).  If progress is not made, we may see the Democrats use reconciliation to pass a totally partisan bill, but the final pay-fors could be watered down from their original starting point and personal tax hikes may be off the table entirely to get all Democrats on board.

MARKET OUTLOOK:  Clients have asked us about our thoughts on the second half of the year, given the strong move thus far in equities, and threats to that run from inflation.   While we are not in the habit of providing such short-term views, we will provide our current thinking which may not time perfectly to six months!  Regarding monetary policy, we believe the Fed will continue to let the economy run and inflation rise above their target without increasing interest rates, as it has been communicated for months.   We believe the Fed must deliver what it communicates, as any deviation from that path would upend confidence in the markets.  We do expect the Fed to slow its asset purchasing program in the second half the year, but markets largely have factored that into expectation, so again no surprises.

Given the level of optimism in the market, and the high valuations we noted earlier in this note, we could see some profit taking in equities in the fall when discussions likely heat up regarding all the pay-fors of the various trillion-dollar legislative bills. Potentially higher tax rates on income and capital gains, and changes to the way estates are taxed, could create selling pressure. However, with so much pent-up demand and savings at the consumer level, we think any correction may be short-lived, and seen as a buying opportunity.  We don’t see any evidence of a bear market lurking in our future, at this point.

European equities could outpace the U.S. in the back half the year, as they seem to be a few months delayed in vaccination and economic reopening.

Much of our outlook is predicated on the assumption that COVID-19 will not shut-down the economy again, given immunity levels and that vaccinations will seriously curtail hospitalizations. The graphic below shows both cases and deaths are at their lowest levels since the pandemic hit the U.S.  However, we are all watching the path that the highly contagious Delta variant of COVID-19 is taking.

We are now embarking on the second-half of 2021 and expect more fireworks in Washington as growth and infrastructure projects get attention once again after the summer break.  This could cause the double-digit return for equities thus far to pause or even correct so we will be watching intently.

We will also continue to monitor inflation as we believe there is more underlying price appreciation than the Federal Reserve is signaling.  We already made a move to add an inflation protection allocation to client portfolios and will look to potentially increase, if we feel it is warranted.

We wish you an enjoyable July, and, as always, we welcome your comments.