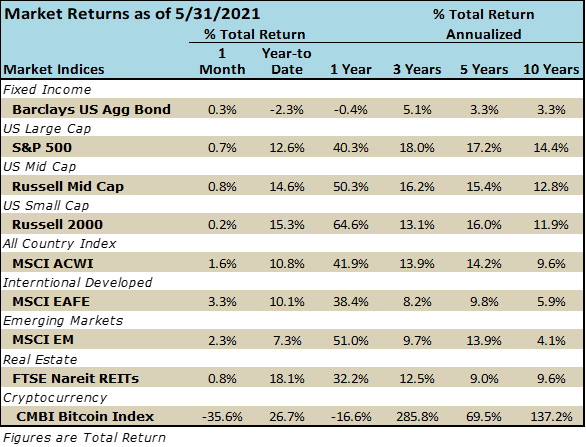 MAY EQUITY MARKETS:  Another month, another positive return for equity markets.  A combination of good corporate earnings guidance, vaccination progress, lower market volatility, and strong economic data provided a tame treasury yield response and positive stock market return for the month of May.   The inflation trade was once again evident in the sector returns which saw the material sector of the S&P 500 rise 5.2%, industrials up 3.1% and energy up 5.8%.  The less economically sensitive sectors underperformed with technology down a modest -0.9% and communication services about flat.

Technology may be taking a breather after its stellar pace in 2020 and this graphic from Bank of America’s Global Investment Strategy group may also shed some light on tech’s time out, so to speak.   Table 1 below ranks various large country’s GDPs in billions of dollars and inserts the FAAMG stocks’ market capitalization as well to reference how incredibly large these five U.S. technology companies (Facebook, Amazon, Apple, Microsoft, Google) are in relation to entire countries. 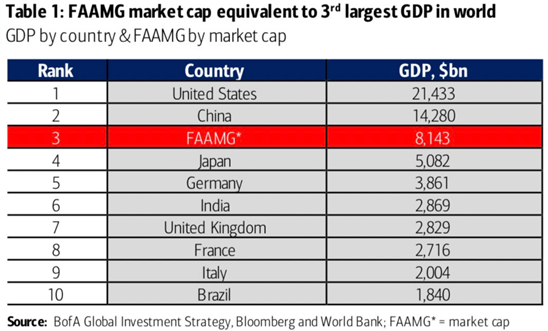 For the month of May, U.S. mid cap stocks rose the most up 0.8% while the S&P 500 rose 0.7% and small cap stocks inched up just 0.2%.   International markets trumped U.S. indexes in May with the MSCI EAFE up a strong 3.3%.   As a reminder, international indices carry a higher weight of economically sensitive stocks than their U.S. counterparts like the S&P 500 or the Russell 1000.  This is in part why we believe that international stocks may have a better return in 2021 than the U.S. stocks.  Year to date, the S&P is up 12.6%, but we do expect a bit of volatility and choppiness in the late summer/early fall as Washington debates the various new spending proposals and how to pay for them.

Market speculation was still a theme in May as “meme” stocks like GameStop and AMC Entertainment were again the talk of the tape.  We see a pattern of retail traders (both novice and highly sophisticated) jumping from one speculative asset to another and this is likely to continue, as long as prices are rising on a range of assets including stocks, commodities and cryptocurrencies.  MFS recently published a note pointing to other signs that market exuberance still has some legs including: 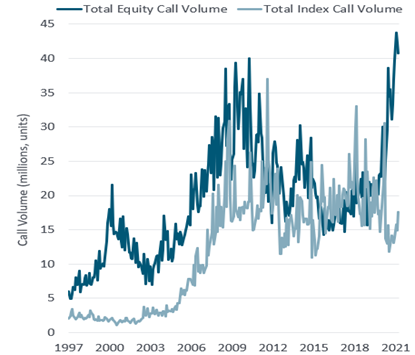 MAY BOND MARKETS:   Interest rates dipped again in May, after a big uptick in March (up 33 basis points).   Janet Yellen caused a small market panic in early May when she mentioned that if inflationary pressures persist, the Fed may have to hike rates.  In less than 24 hours, the Treasury Secretary had to walk back her comments to express that the Fed has the tools it needs, if the time comes.

Clearly the markets are a bit spooked about inflation and anything that may turn off the Fed’s spigot of liquidity that has kept the wind at the financial markets’ backs.  In addition to the inflation worry, there is the unknown about the major spending proposals that Biden has unveiled over the last few weeks.  The bottom line for investors is that a broad spectrum of government spending initiatives and potential tax code changes are under consideration, but it is likely that the details will not be known for several months.  Whether any of these proposed bills can or will become law is still unknown and depends on the balance of congressional power between Democrats and Republicans, particularly in the Senate.  As Congress debates the various proposals, we should expect that the details will change.

Munis were little changed in May, up just modestly with the Bloomberg Barclays 10 Year Index recording a one-month gain of 0.17%.  After a few strong months of supply, new issue volume was down 23% from last May at just $23.8 billion raised.  Demand is still not the issue and many of the deals were again oversubscribed leading to lower yields.  Summer months are usually ones with a strong technical backdrop for munis with demand outstripping supply.

ECONOMY:  More economic reports this month point to a heated economy and lack of certain inputs that are likely to cause some price and wage inflation pressure in the near future.   We highlight a few economic indicators reported in May below to provide some context.

These inputs help frame expectations about overall GDP growth and the consensus of economists are now calling for 6.4% GDP growth, or the highest levels since 1984 (see graph below).

Interestingly, the one economic report that did disappoint was the jobs report.   Given the strong economic restart, most economists had been expecting a blow-out of 1,000,000 new jobs created in April.  The report was a modest 226,000 new jobs.  Some point to the expanded government assistance for out of work individuals as a deterrent to bring folks back into the workforce.  We may or may not see evidence of this in the next few months in the employment data as many Republican governors have removed some of the temporary unemployment enhancements.  Time will tell.

We highlighted inflation in last month’s Perspectives piece and want to add to the discussion again in May because we received another month’s worth of evidence that prices are rising.   To potentially help protect portfolios against rising inflation, Sandy Cove recently made some changes to our asset allocations.  While dormant for quite some time now, inflation is eventually a part of the economy that needs to be dealt with.  It tends to occur quickly and unexpectedly and is mostly curtailed by the Federal Reserve’s monetary tightening policies, of which its biggest tool is raising interest rates.   After 30+ years of nominal inflation readings (averaged 2.4% from 1990-2020), we are now seeing a pick-up in input prices that could be followed by more/higher sustainable inflation.

Sandy Cove looked to provide a solution to preserve our clients’ investments in bonds and equities, which could erode with prolonged inflation above the Fed’s 2.0% target.  We are of the opinion that inflation is not just transitory but will be with us for longer than 12 months.  We screened real asset funds, which benefit from rising costs, and include multi-assets to achieve their goal like commodities, TIPs, real estate, currency and gold, among others.   Together with our Investment Committee, we ultimately decided to make a tactical allocation to an inflationary sensitive investment strategy.  We decided to include PIMCO’s Inflation Response Multi-Asset fund in our clients’ portfolios.  We favored PIMCO’s fund for its ability to own the underlying real assets, its low correlation with equities, and its low standard deviation.

GOVERNMENT ACTION:   With the $1.9 trillion American Rescue Plan (aka COVID-19 stimulus) passed in March, Washington has now turned its focus on the infrastructure bill, aka The American Jobs Plan.  There were some modest compromises made on both sides of the aisle, but the two parties are still fairly far apart on the dollar value of the plan and what is to be included.  Democrats have discussed passing the bill through reconciliation as they did the COVID-19 stimulus plan.  It remains to be seen if the Senate has all the necessary Democrats on board to pass via reconciliation.    Stay tuned.

Among the various “pay fors” of all the Biden proposals are potential sweeping changes to taxes.  There is a capital gains tax increase proposal on the wealthy (capital gains tax rises to 39.6% for those households that make over $1 million in annual income).   Additionally, there is a proposal to eliminate the step-up in basis on estate portfolios.  This is a relatively new idea floated by the Biden camp, and deserves some attention, so we included a piece in our May Perspectives on this specific top that can be found here:  American Families Plan  .

Summer seems in full-force with our first heat wave, and it seems no one is complaining about the heat much given they are more willing and able to move around, travel and socialize.  It is great to see faces with smiles after many long months of masks and restrictions and we are also excited to see clients in person again.  We have kept a keen eye on markets and economic indicators during 2021, which culminated in Sandy Cove Advisors making a tactical asset allocation change to include an inflation response investment strategy addition in most client portfolios.  We will continue to track inflation data to determine if we need to make more adjustments.   We wish you an enjoyable June, and, as always, we welcome your comments.