1. Market Data: Stocks rallied nicely post election but gave back a good portion of their gains by week's end.  The biggest winners were Large Cap stocks (S&P up 3% and Dow up 2%). Reits also fared well finishing up 3.56% while Emerging Markets stocks struggled, ending the week 2.5% lower.

2. Election Rally & Fade: The U.S. midterm elections were in line with consensus market expectations: Democrats will control the House in January (with a record number of women elected), while Republicans maintain their majority in the Senate. Celebrating the consensus outcome of a divided government, stocks ripped higher on Wednesday then faded lower as the week wore on. The most likely outcome of the election will be legislative gridlock in Washington. Donald Trump will find some of his signature campaign promises, such as the construction of a border wall with Mexico, are now in doubt. The president and his staff are also likely to face House investigations on personal finances and conduct. The election will likely also mean that there will be no middle class tax cut. However, it is hoped that there may be some common ground found between the two parties on an infrastructure spending bill.

3. Election Silver Lining & Seasonality: Historical precedent tells us that markets perform better after midterm elections, and that the November to January months are usually the best for stocks. This chart which highlights a 10.7% return for the S&P 500 from October lows to the end of the year following a midterm election. Since 1946, the S&P 500 Index has been higher 12 months after every midterm election! 18 out of 18 times, is a great streak.  Over a shorter time frame, dating back to 1962, stocks rallied 31% on average after Mid-terms. Historical trends like this are important, but it only takes one instance to break the trend. No one can say if it will be different this time until it’s different this time (Chart Courtesy of LPL Financial). 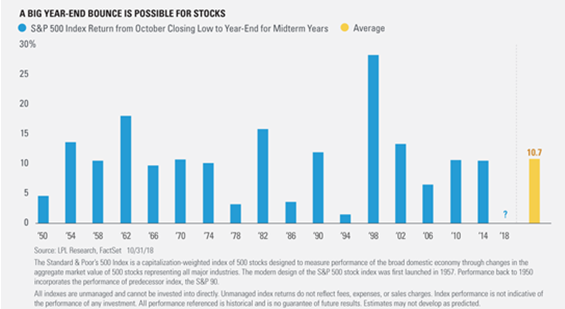 4. Fed Leaves Rates Unchanged, For Now:  No surprises Thursday from Jerome Powell and the Fed. They wrapped up their two day meeting and left the target range for the federal funds rate unchanged at between 2-2.25 percent. In its statement, the FOMC made no mention of the market volatility in October or the rising interest rates that have managed to cool down the bond and housing markets. What’s Next: The Fed will meet again in late December, and is likely to raise the Fed Funds rate another 0.25 percent. According to the most recent data, there is a more than 75 % chance of another rate hike at the December 19-20 meeting. The market has pretty much baked this into the forecast, but that doesn’t mean there won’t be volatility if and when the Fed raises rates again. A cooler economy, rather than a volatile stock market is what would persuade the Fed to take a more dovish tact.

5. Correction Checkup: After October’s nasty decline, stocks have bounced well off of their lows.

6. Copious Confidence: According to the Conference Board, consumer confidence rose to 137.9 in October, its highest level since 9/00. According to the University of Michigan, consumer confidence is at 98.60, down slightly from the 3/18 reading of 101.4, the best reading since 1/04. While stock market declines and gyrations are a concern to wealthier Americans, job prospects are what matters to the middle and lower classes, and they are excellent! (Eliot Eisenberg PhD.)

7. Chart of the Day: The Best of Times for Corporate Earnings
The chart speaks for itself, for the largest companies’ ability to generate operating earnings. With most companies’ earnings reports for the quarter ended Sept 30, 2018 already released, Pension Partners Charlie Bilello notes that these levels of EPS growth haven’t been seen since 2011. Tax cuts, a hot economy in the US and abroad and a healthy consumer have helped.