1. Weekly Market Update: Market’s barely budged this week, masking the fact that there’s a lot going on below the surface. Below we highlight the coming huge week for corporate earnings, a potential “melt up” in asset prices, the best job market in 50 years, Trump’s “dangerous market obsession” and a resurgent Chinese economy.

2. Earnings are Center Stage Next Week: Now that the Fed in on hold and worldwide economic numbers appear to be improving broadly, corporate earnings are now a huge focus. Over 100 S&P 500 companies report next week and the market will take direction from big names such as Google, Facebook, Merck, Exxon Mobil, Chevron, AT&T, Proctor & Gamble and Coca Cola….It’s a big week! As the chart below indicates, we’re very close to all-time new highs. Earnings follow through is key to continued gains. 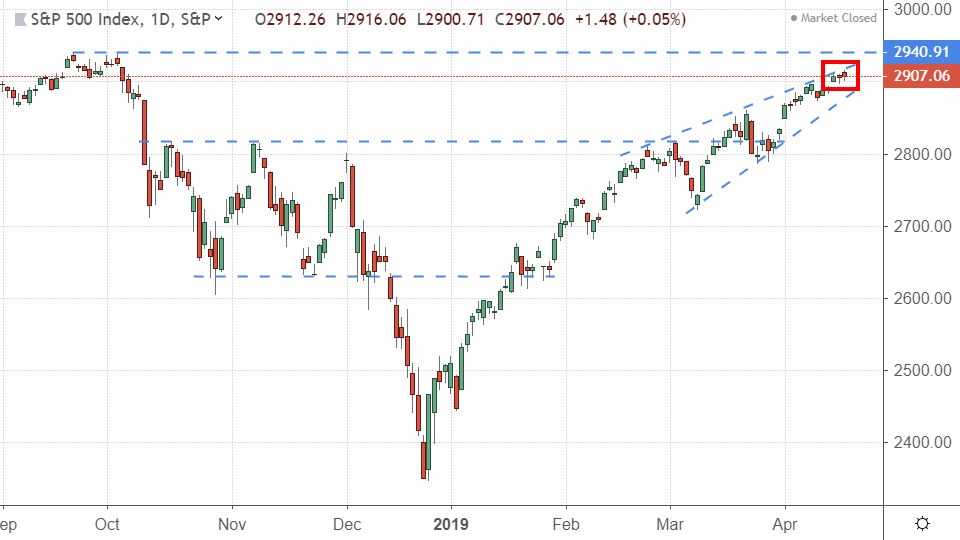 3. Trade Trifecta (China, Europe, Japan):  Stop me if you've heard this one before, but the U.S. and China are back on track to complete trade talks with a possible deal and signing ceremony as soon as Memorial Day (The end of May). Also…this Thursday the European Union gave negotiators the green light to begin discussions with the U.S. on eliminating tariffs on industrial goods while an ongoing dispute over aircraft manufacturing subsidies threatens the imposition of new tariffs by both sides. Also…next week in Washington, a delegation from Japan begins bilateral trade talks as Prime Minister Shinzo Abe seeks to avoid becoming the next China for Trump. That’s a lot of trade talk!

4. Let’s Talk About China - The world’s second largest economy is rebounding.  This week we learned that Chinese gross domestic product (GDP) rose 6.4 percent in the first quarter, handily beating analyst estimates. The better-than-expected GDP number was driven by March retail sales growth of 8.7 percent and factory output growth of 8.5 percent. The data comes after authorities in Beijing introduced a series of economic stimulus measures to counter the headwind of the trade war…..We like to follow the comments of Elliot Eisenberg PhD and economist extraordinaire who added this week:  “Chinese lending activity just hit its highest level in a decade, the money supply is now growing at its fastest pace in a year, and exports have completely recovered from their dismal December. Thus, the stock market is up 33% YTD, and 10-yr Chinese Government bond yields have jumped from 3.1% to 3.4% as growth prospects improve. These Chinese stimulative efforts are boosting domestic, and will boost global, growth!”

5 Melt Up: Blackrock is the World’s largest money manager ($6 Trillion under management) and has a great view of global money flows, so it can pay to listen when their CEO speaks. This week, BlackRock CEO Larry Fink said the U.S. stock market is on “the brink of a melt up.”  A melt up is a dramatic and unexpected improvement in the investment performance of an asset class, driven partly by a stampede of investors who don't want to miss out on its rise (FOMO= Fear of Missing Out). Gains that a melt up creates are considered to be unreliable indications of the direction in which the market is ultimately headed. Here are the reasons why Fink thinks that a melt up may occur: The Fed is more dovish than ever. There’s a shortage of good cheap assets. Investors are holding record amounts of cash. There is a huge underinvestment in stocks as investors rushed to fixed-income. Investors had anticipated rising interest rates which is not happening.

6. Rarely Has the Job Picture Been Better. Initial Claims is a report that measures the number of jobless claims filed by individuals seeking to receive jobless benefits. The report, published since 1967, just hit the lowest number since 1969. That’s a 50 year low if I do my math right. On the chart below you can see that claims hit their worst level almost at the exact time the stock market bottomed in March 2009. The turn in both was simultaneous, providing real evidence that the turnaround in the market coincided with improvement in the real economy. Since then we've seen an incredibly long bull market, as well as ongoing improvement in initial claims. 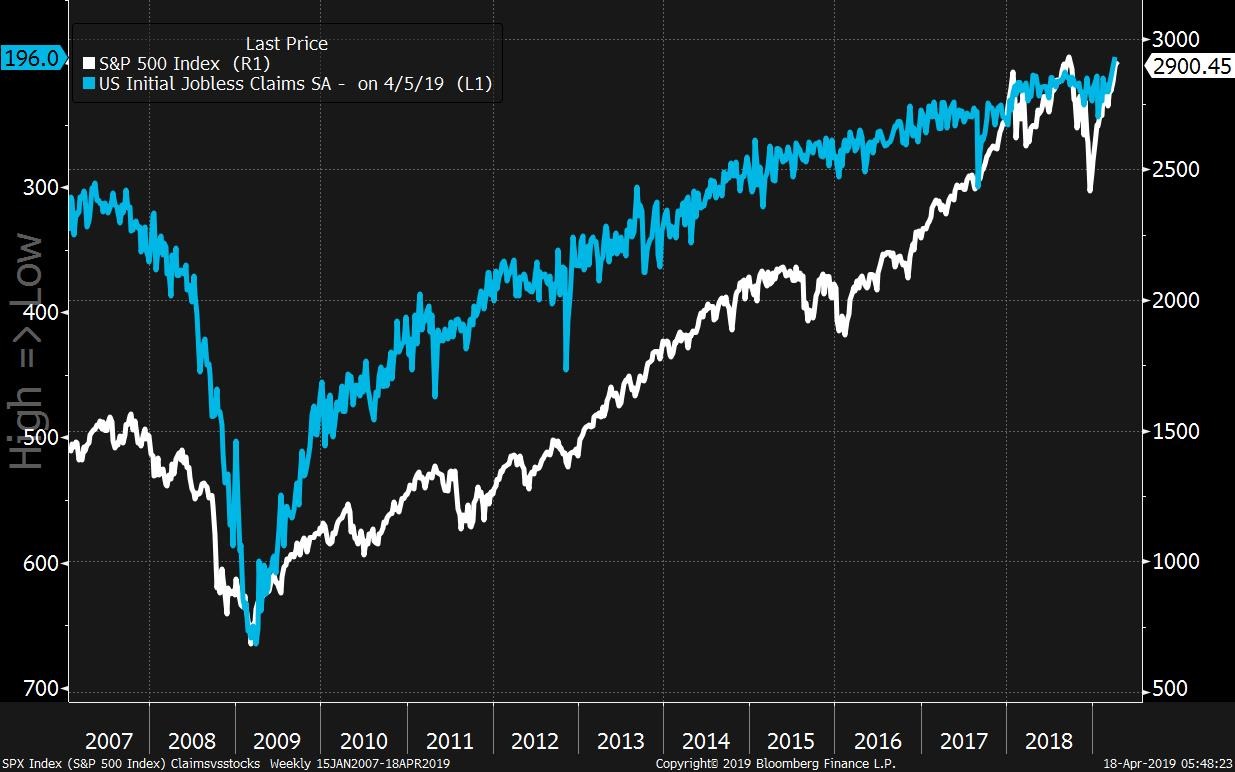 7. Trump's "Dangerous Obsession" with the markets came into focus again this week as Morgan Stanley's lead Strategist (Ruchir Sharma) called him out in a NY Times  article.  Sharma argues that since the market's Fall tumble, Mr. Trump has begun making critical decisions with an eye towards pushing stock market prices back up.  There have been notable market focused policy moves, such as:  A) Backing away from increasing tariffs on Chinese goods. B) Pulling back from a threat to close the Mexican border. C) Blasting the Fed on higher interest rates and nominating pro-markets candidates to the Fed. The big upcoming test, according to Sharma: Will the US agree to a good, tough trade deal with China or merely one that just placates the markets.