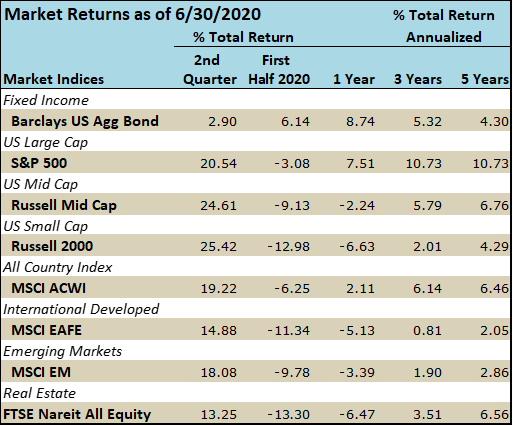 The second quarter started and ended in quite a different manner with respect to the virus, the economy and the financial markets.   Let’s take a look at these three important factors to get a better picture of where we are now and where we think we’ll be in the future.

COVID-19:  Most states started April still in “lock-down.”  In our state of Massachusetts, new cases were hitting ominous highs as April progressed. Daily average cases in April were around 2,000/day.   May saw a significant flattening of the curve and hospitals were no longer at capacity.  Daily average cases declined to about 1,000 cases/day in May.   By June, the governors of most states affected began to open up their battered economies in methodical fashion with restrictions that have become the new norm.   MA Governor Baker instituted a slow, three-phase approach and by June daily cases averaged about 350/day.

As the quarter came to an end, we began to see another resurgence of the virus, mostly in the southern part of the U.S.    The good news is that the fatality rates (see chart below) are not as high and the medical community now has better protocols and treatments for patients. 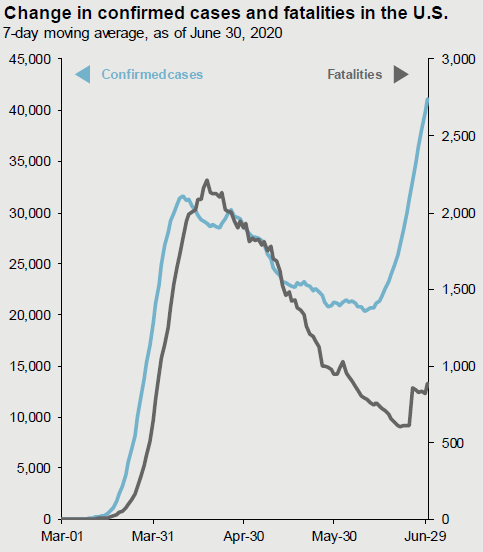 Not all states are facing the same pattern of the virus’ spread.  A look at the Johns Hopkins Coronavirus Resource Center data that tracks new cases by states show the stark contrast from the worst early areas (NY) to what are now the spiking states (CA). 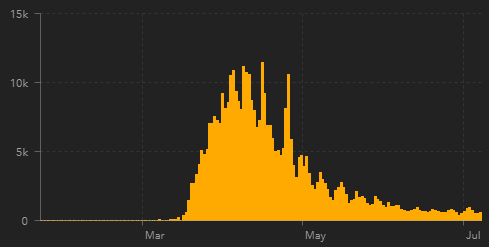 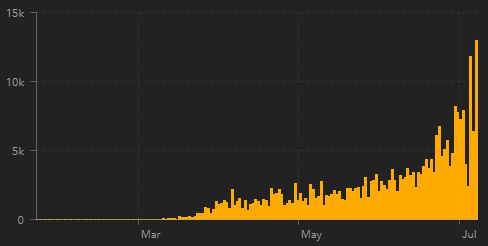 ECONOMY:  The outlook for the economy will be a direct result of the virus’ path.  We are/were in a deep recession, but it is expected to be very short (perhaps two quarters). We know that April was the worst month (to date).  One way of viewing the overall economy is through changes in payroll since our ability to earn and to spend have a huge impact on GDP (consumption accounts for about 2/3 of total GDP).  Payroll changes hit an all-time monthly decline of nearly 21 million people in April followed by a 7.5 million rise in payroll during the last two months of the quarter.  While the recovery was nice to see, the current unemployment rate is still very high at 11.1%.  The graph below shows the extreme job losses this self-inflicted shut-down has created versus the financial crisis of 2008-2010.  Clearly the businesses that could open back up did, but many are unable to in the travel, hospitality, and leisure industries. 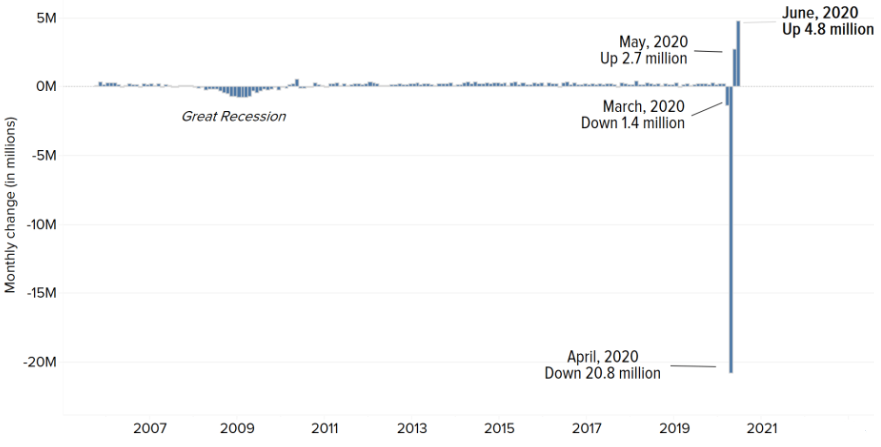 The government and Federal Reserve acted quickly with about four main stimulus/monetary efforts totaling $2.4 trillion dollars, or roughly 12% of GDP.   Many believe $1 trillion more is on the way.  Morgan Stanley published their best estimate of what the next stimulus round would look like, see below.

Medical experts believe the reopening of state economies and relaxation of restrictions is causing the virus to spike again.  This, in turn, is creating a slowdown in the re-opening efforts.   Texas, Florida, Arizona and California are states where both new restrictions are being added or relaxed rules have been tightened up again to help stop the virus’ spread.  None of this is good for a smooth path forward.

MARKETS:  The second quarter’s sentiment has shifted a bit as well.  The bull rally began with massive government stimulus plans, slowing COVID-19 case growth in the U.S., and a path to economic recovery that was somewhat visible.  This fueled double-digit equity returns in April and May.  Then the COVID-19 case growth began to turn up again, states began to halt re-openings, and the path to economic return became much less certain.   Returns in the month of June for U.S. equities were modest, up about only +2.0-4.0% range.  This was a stark contrast to the full quarterly returns which posted a 20.5% total return for the S&P 500 in the second quarter.

The best performing U.S. asset classes in the quarter were the small and midcap equities, both up 25% during the quarter.  As we’ve mentioned in past monthly newsletters, we focused on these two areas to slowly leg back into the market with the cash that had accumulated from our allocation shifts away from real estate and emerging markets.  These were timely allocation changes that should continue to benefit our clients’ portfolios, in our opinion.

One other positive factor during the quarter’s rally was that the breadth of industry participation in the rally became much more broad-based.   In the early days of the rally, technology was the clear and singular leader.   As the quarter progressed, all sectors participated and posted positive 2Q 2020 results as noted in the table below.  This also helped our fully diversified portfolios performance. 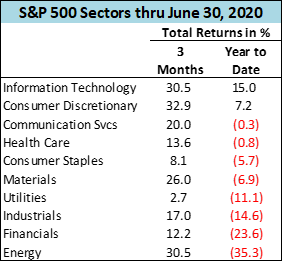 Similar to equities, the fixed income markets moved mostly sideways in June as enthusiasm for a smooth restart of the economy waned.  Bonds also reacted to the Fed’s measured outlook for the economy as it pledged to keep an accommodative interest rate policy for the foreseeable future.  The yield curve ended the quarter in a similar place to where it started. COVID-19’s impact across the yield curve is apparent in the graph below compared to a year ago, when we thought interest rates were “low.”  Clearly we could, and did, go lower, but we still do not believe negative nominal interest rates will be on the Fed’s menu of options to help move the economy forward. 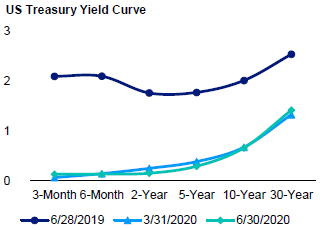 The second quarter was immensely calmer than the end of the first quarter, when bond markets temporarily seized up due to the economic shutdown and, at the time, limited government response.  The graph below illustrates the short-term selling in March followed by a much calmer April, May, and June. 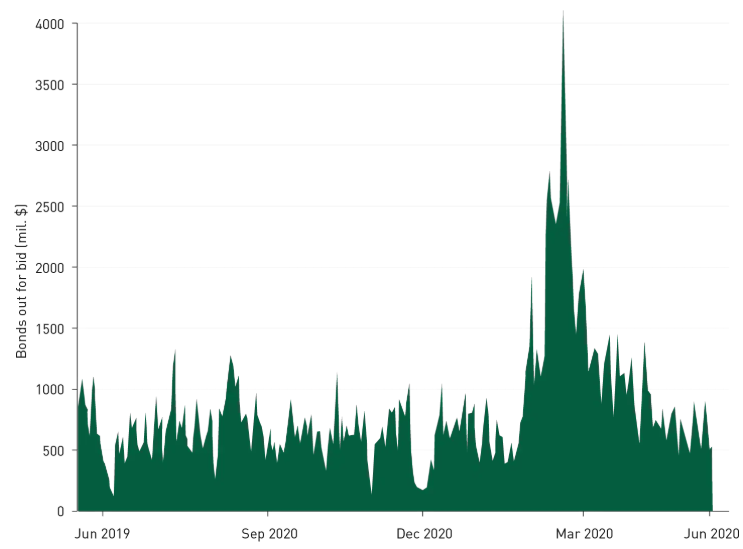 OUTLOOK:  How much bad news can the market ignore?

Like many, we continue to be surprised at the pace and height of the market rally.  We still believe we are in a volatile period that will provide us with more attractive entry points over the coming months.    For many clients we still have some cash on the side-lines primarily earmarked for large cap U.S. equities.   We do expect the rising COVID-19 cases will force economic delays that are currently not being factored into the markets’ valuations.  Additionally, the markets have not begun to shift their focus to the major elections we have in a few short months that could alter both the Senate and the White House’s political party.  These perceived changes and implied political uncertainty are never good conditions for financial markets.

We hope that an economy slowly moving back to normal will get us headed in the right direction.  Regardless of the  near-term volatility and path the economy make take, a well-diversified and properly allocated portfolio should weather the storm.