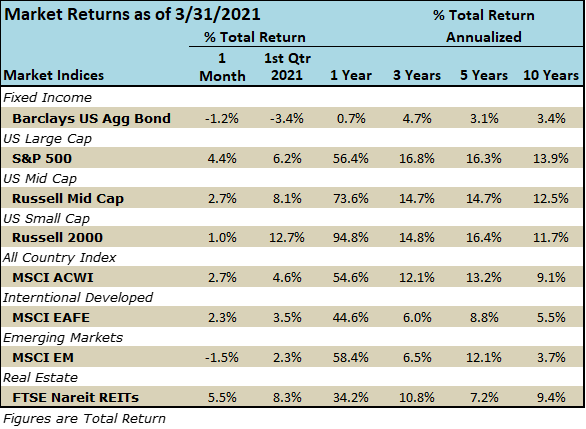 MARCH EQUITY MARKETS:  Equities were in favor in March with the economic rebound coming into better focus as vaccinations progressed nicely and Biden signaled a May 1st target date when all Americans are eligible to get vaccinated.  After a slow January, stocks made a recovery in February and March finishing the quarter in solidly positive territory.  Small capitalization stocks were the winners for the quarter up 12.7%, followed by mid cap, then large cap.

The valuation premium continued to come out of the technology sector and into cyclicals during the month.  This is best visualized in the table below breaking out the growth and value stocks within Russell’s large, mid, and small cap indices.  Value beat growth in both the month and the quarter, which is the opposite of what was occurring in 2020 when it was the growth stocks that were the clear winners. 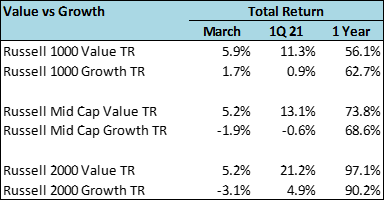 From a sector standpoint, all U.S. sectors reported positive first quarter returns, but there was a wide margin between the top sector (energy) up 30.9% and the bottom sector (consumer staples) up 1.1%.  Energy stocks were coming off extreme lows in 2020 and energy prices were rising as the cyclical sectors began to show improvement.   Financials were up solidly due to the increase in the yield curve, which made bank margins expand.  Industrials rounded out the list of double-digit quarterly gainers.  Strong factory and manufacturing economic indicators were pointing to a recovery already underway and the stocks reflected that improvement.   Technology stocks, which were the primary driver of performance in 2020, have taken a breather, starting off 2021 with only a 2.0% gain within the S&P 500.

International equities were up, but not as much as domestic equities for both the month and the quarter.  A slower vaccine roll-out was seen as hampering any rebound and a few countries like France imposed a third national shut-down further limiting growth.  After a strong start to the year, the emerging market countries ended the quarter on a down month.

MARCH BOND MARKETS:   Interest rates rose sharply during the month as the market embraced expectations of an economic surge following the pandemic.  The Treasury yield curve steepened during the month as the low end of rates were still locked close to zero by the Fed.  The long end, 10-year Treasuries, rose 33 basis points during the month, thereby steepening the curve. Markets are laser-focused on the yield spread (the difference between 10-year and 2-year Treasury rates).  Typically, a rising curve signals economic improvement is ahead (and potentially inflation).

The monthly return for the Barclays Aggregate bell-weather benchmark fell -1.2% and is down -3.4% for the year as yields rose and bond prices fell.  We commented last month on how the intermediate and long-dated bonds may suffer in the short-term with the swift rise in rates and how Sandy Cove Advisors repositioned portfolios with a shorter-duration to help protect against this move.

Munis had strong monthly gains in March, up +0.6%, in contradiction to the Treasury market’s decline.  Clearly the amount of funding going to state and municipalities in the latest $1.9 trillion stimulus package was a welcome surprise for the muni market. Both S&P and Moody’s bond rating agencies upgraded their outlooks for many sectors based on the bill’s passage.  New issuance (supply) was strong in March at $40.0 billion, and was met with just as strong a demand for the paper.

Biden’s $1.9 trillion CARES Act was signed into law after certain provisions, like the $15/hour national minimum wage, were removed.  More stimulus checks were on their way ($1,400 this time around) before the month ended trying to put money into the hands that need it.  There is evidence that some of this cash is making its way into financial markets as well, as conservatives questioned the need for such a large stimulus as the economy looks to be on the cusp of ramping back up again.

On the last day of the month, Biden also unveiled his $2.3 trillion infrastructure package centered on improving our roads and bridges, expanding broadband coverage and boosting research.  The plan would spend $2.3 trillion over eight years and be paid for over the next 15 years.   To pay for all this government spending, Biden proposed raising corporate taxes and basically unwinding all the cuts that Republicans put into place in 2017.  The plan did not have bi-partisan support, so another showdown in Congress is likely.  Below is a graphic breaking down of the infrastructure plan.

How $2.3 Trillion Would Be Allocated in Biden’s Infrastructure Plan 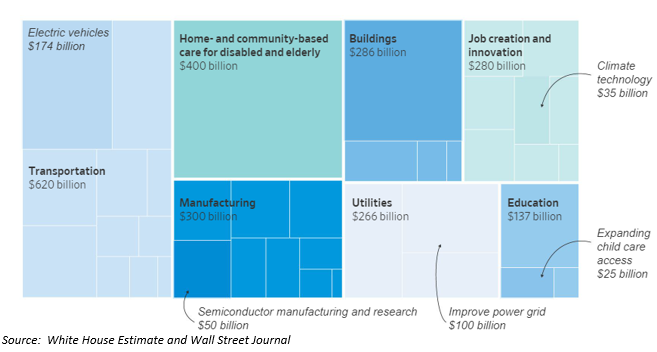 COVID-19 UPDATE:  Cases have trended up in certain states in the U.S. and it cannot be solely attributed to economic re-opening. Florida and Texas did not show any signs of case escalation in March, but those states still with stricter mandates, New York, New Jersey, Massachusetts saw an uptick.   Many experts attribute the case rise to children returning to school and socializing, and the evidence does suggest that with the rise is most prevalent in 10-19 year-olds.

The FDA authorized the first over-the-counter COVID-19 tests enabling people to test and get results at home.  Without the need for a prescription, many Americans may be more easily diagnosed.

On the vaccine front, the good news is that the supply increased as J&J entered the market with their one-shot vaccine and many more citizens are getting inoculated.   CDC officials report that 15% of the U.S. population, 51 million people, has been fully vaccinated at this point.

ECONOMY:  Economic indicators reported in March were all positive.  Off the heels of a strong February employment report, the March report was even more robust with job growth of 916,000.  The hospitality and leisure sectors showed the strongest gains for the month and bode well for future job reports as the economy continues to reopen.  Overall, the results showed new job creation was broad based across most sectors of the economy.  The unemployment rate dropped further to 6.0%. signaling that companies are willing to bring employees back and new employees on.

Inflation is still benign with the Fed’s preferred inflation measure of Personal Consumption Expenditures (PCE Index) up just 1.4% year-over-year.  That is well below the 2.0%-2.6% range that the Fed said it was willing to temporarily tolerate as the economy re-opens.

In conclusion, we are hopeful that as the vaccine continues to roll-out, the economy can heal, rebound and lift which has thus far been evident in the data for the first three months of the year.  However, nothing is a perfect straight line up and to the right and we are still watching long-dated interest rates ebb higher, some new COVID-19 variants spreading quickly, and Europe’s vaccination delays as near-term issues that could cause the markets to pause.