1. Weekly Market Update: Keep Calm and Carry On.   Markets rallied this week on calming words from China and some solid US economic reports. While it was a nice bounce week, the bounce was confined to the narrow 4% trading range we have been in all month.  For the week, stocks gained 2-3% and bonds were flat.  Below we take a look at some of the factors that could break us out of this narrow trading range in September.  These factors include a seldom seen buy signal for stocks, a new stimulus package out of Europe, shifting investor sentiments and strong world leadership on the part of the US consumer. 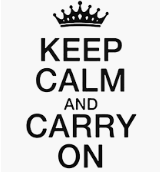 2. Trade Bounce:  In this market environment, calming words matter. Words (and Tweets) move markets, and they did so this week as China's Commerce Secretary said that it was opposed to escalating trade tensions, hinting Chinese authorities will not retaliate against the latest round of U.S. tariffs. Here are his exact words: “We firmly reject an escalation of the trade war, and are willing to negotiate and collaborate in order to solve this problem with calm attitude” Just a few hours later, President Trump, in a radio interview with Fox News, said that the U.S. and China are set to have trade talks on Thursday “at a different level.”  It would have been nice if he used the word "calm" as well. 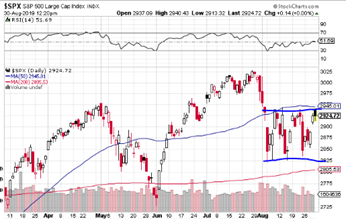 3. Range Bound: As noted above, major averages are just 3-4% from all-time highs.  August had us trading in a very narrow 4% range. Since US economic numbers remain steady, corporate earnings season has passed, and central banks are highly likely to remain accommodative, TRADE issues will likely be the factor that break this trading range to the upside or downside.

4. Fear & Greed: When investors are fearful, typically markets bounce. This is what occurred this week. The Fear & Greed Index measures seven investor sentiment gauges ranging from the Market Volatility Index (VIX) to the Put Call ratio. When the Index gets to extreme readings below 20 (it hit 18, “Extreme Fear” Tuesday), markets are often “oversold.”  Oversold conditions occur when sellers are out of ammo and their supply of securities to sell is low. When this happens, just a little buying power can send markets back into the green. This week, positive news on the economy and trade gave buyers confidence to step in.

5. Economic Numbers Were Encouraging This Week… Highlighted by Consumer Confidence reported mid-week. Would you believe that American economic optimism is at a 19 year high? This number, embedded in this week’s Consumer Confidence report challenges signs of an imminent recession. Americas’ assessment of current conditions was helped by a job market that remains robust. While other parts of the economy may show some weakening, consumers have remained confident and willing to spend. This morning Consumer Spending numbers surprised to the upside as well. Consumer spending is said to represent a whopping two thirds of US Gross Domestic Product (GDP). Also challenging recession fears was the fact that the second estimate of GDP came in as expected at 2.0% growth. Not stellar, but steady as she goes

6. A Case for Equities: For the first time since 2009, the S&P 500′s dividend (1.97%) is yielding more than 30-year Treasury bonds (1.92%). The only other similar inversion in the past four decades came in March 2009, a low point of the financial crisis, according to data from Bespoke Investment Group. "For an investor looking to hold something for the long term, it makes equities relatively attractive,” says Bespoke’s Paul Hickey. To put a finer point on the competition for returns: “two-thirds of the stocks in the S&P 500 yield more than the five-year US Treasury note, more than 62% yield more than the 10-year US Treasury note, and slightly more than half yield more than the 30-year bond.” This week, Sam Stovall, CFRA chief investment strategist, wrote in a report: “Since World War II, whenever the S&P 500’s month-end yield exceeded the yield of the 10-year note, the S&P 500 was higher 12 months later by an average 22% and gained in price in 74% of all 31 observations. 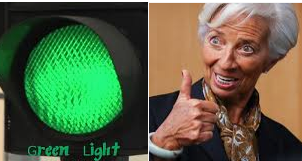 7. Europe’s New Stimulus Program Starts in September? Former IMF Head Christine Lagard will be taking over the top post at the European Central Bank (ECB) in November.  However she has already told the European Parliament in written comments that the ECB has room to cut policy rates. It is “clear that monetary policy needs to remain highly accommodative for the foreseeable future,” she wrote. Analysts have suggested that ECB stimulus will include large bond purchases as well as interest rate cuts. Expectations call for a 10-basis-point cut (one-tenth of a percentage point) to the ECB’s key interest rate, currently set at negative 0.4%, as well as $55 billion of bond purchases..

• We Should All Be Reading More Ursula Le Guin: Her novels imagine other worlds, but her theory of fiction can help us better live in this one (The Outline) - Katie

• Andrew Luck retired young, and was hailed for his courage. Barry Sanders was called a quitter. (Washington Post) - Courtney

• The Next Recession Will Destroy Millennials (The Atlantic)