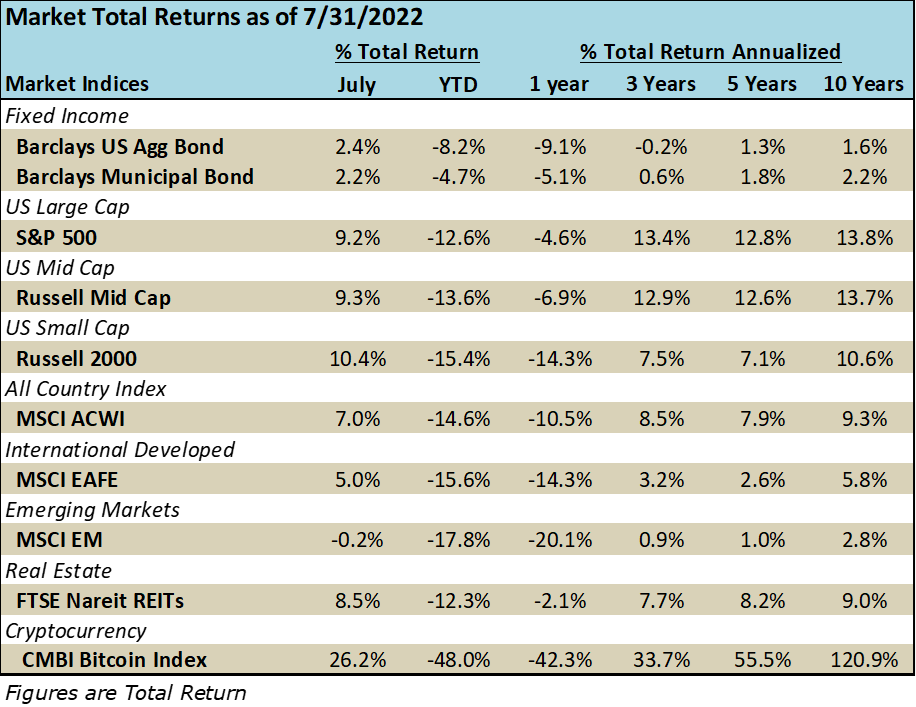 Equity markets had a good month as corporate earnings came in better than feared from some of the bellweather names like Apple, Amazon, and United Healthcare. There was no collective reduction of earning expectations, that many were expecting given the short runway to the end of of the year and heightened input costs. Also helping markets get a lift was an in-line Fed hike and more doveish language post-FOMC meeting from Chairman Powell.  Lastly, oil prices continued to slide from June’s highs and spent a good portion of the month below $100.  Luckily, we even saw some reprieve at the gas pump as well! 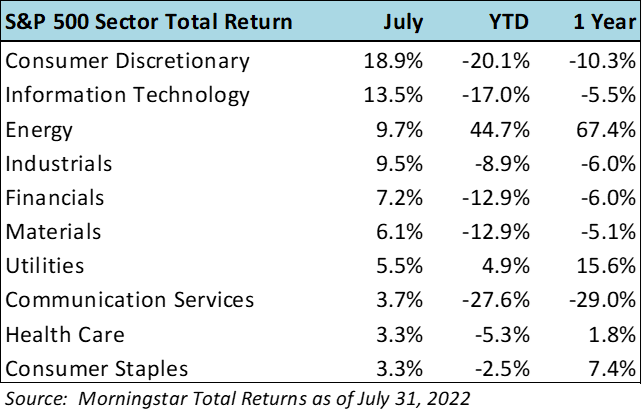 Consumer discretionary and technology sectors had double digit rebounds in July, contributing to the growth style outperformance on the month and the Nasdaq’s 12.6% total return.

FED POLICY: FEARS OF INFLATION BATTLE WITH FEARS OF RECESSION

The paradigm has shifted from worries centered only around inflation to fears of inflation and an impending recession with each Fed rate hike.  With the market froth mostly unwound from 2021 at this point, we think we are closer to the end of a correction than the beginning.   Even with two negative quarters of GDP contraction (1Q and 2Q 2022), we do not see a recession in 2022. With that being said, we cannot rule out that an aggressive Fed over the next 12 months could cause growth to stall further.  What is likely next on the worry meter is “stagflation” which is higher than normal inflation combined with weak growth (basically what we have already experienced in the first half of 2022).  While the Fed can raise rates and thereby stifle demand further, it cannot “rate-away” inflation in key areas like energy and agriculture that are stubbornly high due to exogenous forces (Russian invasion).

Ultimately, the Fed will be data dependent on the speed and magnitude of their tightening. Personal Consumption Expenditures (PCE) for June was reported the last Friday of July and came in slightly higher than expected at 6.8% growth year-over-year (see chart above). Excluding food and energy, the Core PCE also showed acceleration at 4.8% (energy +43.5%, food +11.2%, prices for goods +10.4%).  High inflation and an otherwise strong consumer is why the Fed thinks the economy can withstand more tightening and will likely keep interest rate hikes coming through the end of the year and potentially into 2023. The good news from the latest announcement is that Powell signaled that 75 basis point hikes are in the rear-view mirror (subject to changes in economic data, of course).