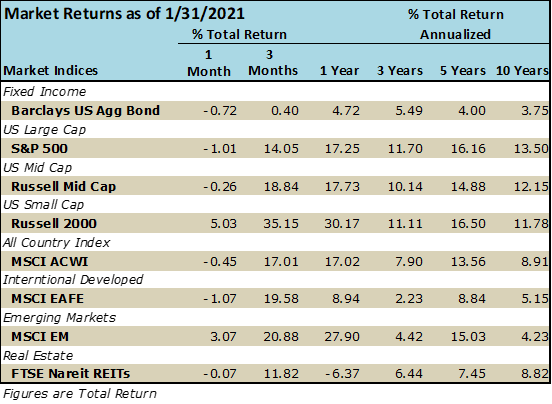 JANUARY EQUITY MARKETS:  January was mostly a down month for financial markets as uncertainly about the new strains of virus and confusion/delays surrounding the COVID-19 vaccines became a major focus.  Most stock and  bond indexes recorded small losses, except for small caps and emerging markets which continued their trajectory from fourth quarter.  From a sector standpoint, the strong performers in the S&P 500 Index during 2020 (consumer, technology, communication services, and materials) were all down in January.  Energy and health care posted the best returns, up 3.8% and 1.4%, respectively.

There were some large up and down days to start off the year and the VIX, Volatility Index, spiked up 38% during the month as stocks mostly fell (see chart below). 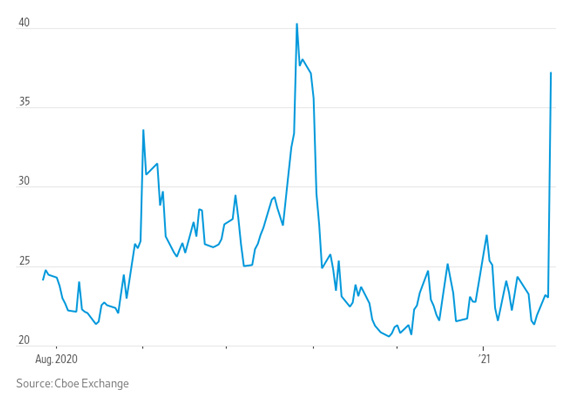 You tend to see periods of sell-off (consolidation) when investors take short-term profits after a strong and quick rise.  Near-term expectations may have gotten ahead of stock prices, so the pullback is not out of the ordinary.

Typically, when markets get a bit ahead of themselves, stocks in vogue tend to get pushed higher (momentum buying) and a “fear of missing out” plays a role.  We believe this was the case with Tesla stock, which catapulted to new highs during 2020.   Putting the company’s valuation in perspective with other automaker peers really demonstrates this point.   The chart below shows the January 2020 market value of automakers (dark blue) compared to the December 2020 values (light blue). 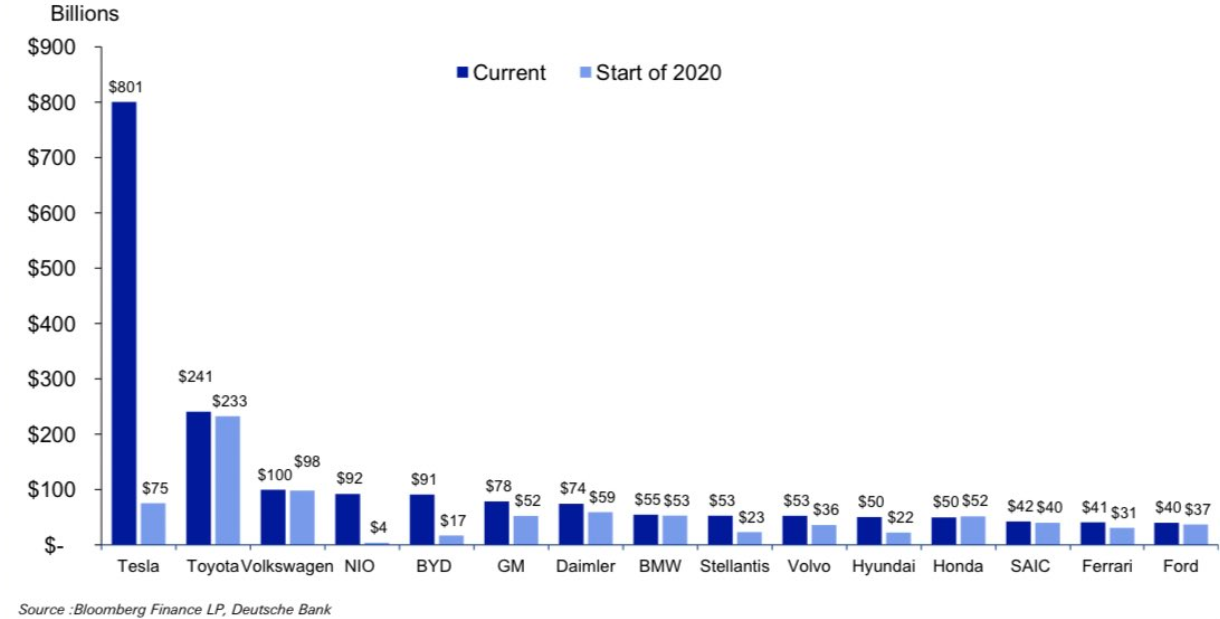 MARKET SPECULATION:  Combine rising markets, commission free trading and free money in the form of near zero borrowing rates and stimulus checks, and you have a recipe for speculation.  It’s an environment where everyone looks like really smart investors because rising tides lift all boats, so to speak.  The mantra of sell-proclaimed day traders, “markets can only go up” were heard loud and clear over the last few months.  As a result, you have seen small pockets of stock price extremes.   From the stock chat rooms of Redditt came a group of retail traders acting in unison to outsmart the hedge funds who were betting that GameStop stock would decline.   A wild ride in GME and other highly shorted stocks, seen in table below, ensued for a few weeks in January.  Stock speculation usually does not end well for most.   GME stock was $19 per share on January 1st and ended the month at $325 per share.  Most would admit there is nothing fundamentally positive for the old-school game software retailer to warrant such a rise in value.   And as of early February, it’s been a rough ride for traders owning the stock as it’s fallen to $55 a share in the first four days, an -83% drop.

Ten Most Shorted Stocks in the Russell 3000 Index 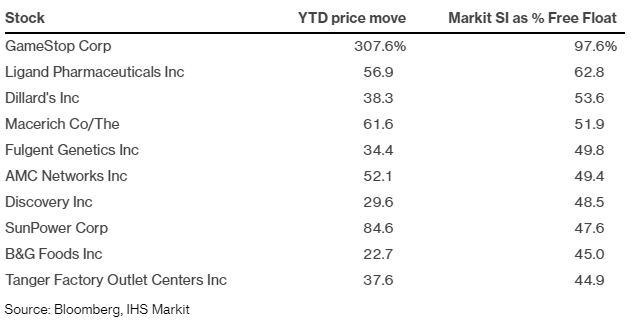 JANUARY BOND MARKETS:   Long-term interest rates rose sharply in January propelled by hopes of another stimulus bill and the yield curve steepened (see the red line in the graph below).  The short end of the curve (2 Year T-bills) was unchanged, but the long end rose with 10 Year Treasuries up 0.16% points (16 basis points) and the 30 Year bond up 19 basis points.  For the first month in almost a year the 10 Year Treasury pushed over the 1.0% hump (recall this same bond had a yield of 1.64% prior to the pandemic.)

Municipal bonds fared better than corporates as a Democratic stimulus package proposed $350 billion of ample aid for states and local government municipalities.   Investors demand was strong in the muni market in January with $14 billion of muni bond mutual fund inflows. Total muni returns for the month were a positive 0.64%.

President Biden’s policy agenda got a boost from Georgia voters in early January with Democrats winning both Senate run-offs elections. Putting policy into law will still be a difficult task since Congress is so evenly split.  At this time, we believe large tax increases still look like an uphill climb, but no longer appear impossible.  We also assume that Congress will be taking a closer look at technology companies and they may face some regulatory uncertainty down the road.

One of Biden’s first actions in office was the proposal of a fifth COVID-19 stimulus relief bill with at $1.9 trillion price tag.  This stimulus is currently being debated with Republicans offering up a $600 billion proposal in response.  Once again, the parties are miles apart when it comes to the reach and the cost of a stimulus package.  Without a commanding Democratic majority, we still believe the path to approval for Democrat’s policy agendas may prove difficult.

The Federal Reserve held their first meeting of 2021 in late January and left rates unchanged, keeping their accommodative rate policy intact.   Chairman Powell continued to signal that short-term rates would stay low for the foreseeable future.  The Fed minutes find that most members are still worried about the toll the virus has taken on the economy and the need for stimulus to keep U.S. households and businesses afloat.

ECONOMY:  Economic indicators reported in January were mixed, showing either a continued modest improvement (job growth and industrial production) or a slight negative surprise (retail sales and consumer sentiment).  Job growth stared off the year with a positive report of 174,000 jobs added versus expectation of only 50,000.  While a good number, it needs to get materially higher to get the millions of Americans back to paying jobs and that needs an open economy.

In conclusion, we are hoping the vaccine roll-out, which has a lot of room for improvement, will be streamlined and vaccine supplies will continue to ramp with the addition of Johnson & Johnson’s vaccine.  The markets are off to a slower start which is normal after such a good run.  We will leave stock speculation, day-trading, and herd-like buying to the folks who find that somehow worthwhile (but will likely get burned).

Sandy Cove Advisors continues to be focused on long-term returns, quality companies and their managements.  We  believe that the drivers of stock prices and market returns, over time, are the cash flows and growth fundamentals of the underlying companies.   Creating a portfolio of diversified managers who invest in those companies, large & small, domestic and foreign is our main concern.  We’ll leave the GameStop’s for others. 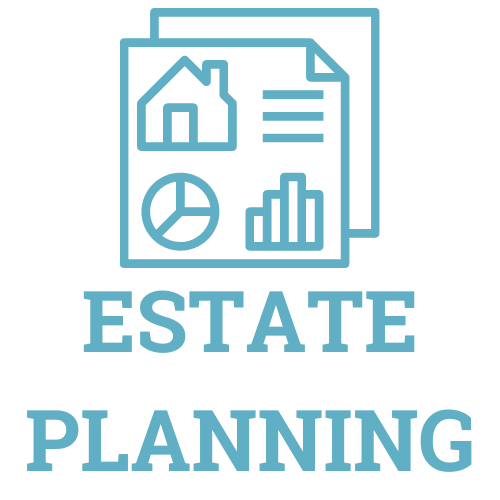