1. Weekly Market Update: The Dow Jones Industrial Average was down less than 1% this week, its fifth consecutive weekly decline. The S&P 500 and Nasdaq Composite also posted their third straight week of losses. Despite their recent downtrends, the Dow and S&P 500 are currently up 10% and 13% for the year. International stocks fared a bit better than US stocks and bonds keep chugging incrementally higher. Below we look at some of the factors causing market anxiety such uncertainty in trade negotiations, battling politicians in Washington and a stingy Federal Reserve that will not be supplying rally fuel in the form of a rate cut. We also note that market sentiment is starting to get to rally levels, and we look at the latest on obscene CEO pay out this week.

2. Hopes Dashed for Interest Rate Cut. Investors were looking out for any mention of monetary loosening (a rate cut) in the minutes of the April 30-May 1 Federal Reserve Bank meeting published on Wednesday.  Markets love rate cut fuel….No such luck. The minutes revealed that no rate moves would be coming “for some time.” Prior to the release of the minutes, St. Louis Fed President James Bullard said the Federal Reserve may have slightly overdone it“ when the bank raised interest rates in December during an interview with Bloomberg News, adding that it is premature to talk about a rate cut. A week ago the futures market in federal funds was projecting a 75% chance of at least one rate cut this year. 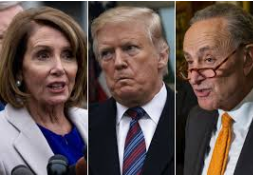 He Said, She Said..Politicians Behaving Badly: The latest rendition of the Don, Chuck & Nancy show got ugly this week and we suspect this charade could weigh heavier on the markets in coming weeks. Markets will often ignore the banter out of DC and often react positively when both sides of the aisle do not get along under the theory that: If divided politicians cannot enact harmful legislation, then that’s a good thing for the economy. However with the rancor at a fever pitch, this level of anger is causing anxiety. Markets hate uncertainty and may be asking...Are Impeachment proceeding coming? Some of this week's sordid details…Wednesday, prior to a meeting on a $2 Trillion infrastructure bill between Trump, Schumer and Pelosi, Speaker Pelosi told reporters that President Trump was involved in a “cover-up.” Trump later told reporters, “I don’t do cover-ups” adding there was “no collusion” and “obstruction” and he accused the top Democrats of "tearing the United States apart" by pursuing investigations stemming from the concluded Russia probe. Later in the week Pelosi told her Democratic colleagues that President Trump “wants to be impeached” so that he can be vindicated by the Senate. She also called Trump’s actions “villainous” and added that she prayed for him and added: ”I wish that his family… or his staff would have an intervention for the good of the country.” Trump’s response: “She's a mess, look, let’s face it,” “She's not the same person, she's lost it.”  Some politicians on the right believe the intensified rhetoric from the left could be an attempt to divert attention away Attorney General Barr’s investigation into the motives and tactics of the investigators.  We can’t wait till Tuesday to pick up where the action left off …NOT!!!

4. This Week’s Trade Highlights / Lowlights : According to the Financial Times  "About a third of the 239 American companies they surveyed said they were canceling or delaying investments in China while about 40 percent said they were considering relocating manufacturing facilities outside of China. ” The breakdown in Sino-U.S. talks and the latest targeting of Chinese companies by the White House has economists at investment banks increasingly pessimistic about the long-term outlook. Goldman Sachs Group Inc., Nomura Holdings Inc. and JPMorgan Chase and Co. are among those pricing-in a greater chance of a protracted trade war. China’s state media signaled a lack of interest in resuming trade talks with the U.S. under the current threat of higher tariffs, while the government said stimulus will be stepped up to buttress the domestic economy.

5. Sentiment could be closer to turning positive.  One investor sentiment measure we like to follow is the CNN Fear & Greed Index. When Fear is high (which it is now), it can mean that we are getting closer to the buy zone for risk assets like stocks. We are getting closer to the "Extreme Fear" range which has historically been a good time to buy.  Sentiment indicators are counter intuitive to some. Buy when others are fearful, sell when others are greedy.

6. Volatility-Stock Swings…It's always good to keep an eye on volatility and keep it in perspective...and to use it to your portfolio's advantage. This note from E. Eisenberg PhD. caught our eye this week: "Since 1896, the Dow has fallen by 2% or more in a day 1,011 times, or an average of once every 33 trading days, or an average of 7.6 times a year. That means that with the Dow now at almost 26,000, a price swing of over 500 points can be expected to happen, on average, once every seven weeks. Equity prices can swing substantially but that is not unusual."

7. CEO Pay Reaches Dizzying Heights: Bloomberg News just ran its latest scorecard of executive compensation, and the results are staggering. The top 5 highest paid executives brought in a collected total of $1.18 billion in combined salary and stock awards in 2018. The highest paid of them all, Tesla's Elon Musk, received a pay package totaling $513 million, most of which is in the form of stock options. Does this mean that Musk literally pocketed $513 million pre-tax in 2018? Absolutely not. It means he was granted stock options that vest over a period of time and are tied to performance targets. In Musk's case, he was granted over $2 billion worth of options in 2018 that vest over 10 years as long as Tesla achieves performance targets under his stewardship. In fact, Musk received no salary compensation in 2018 at all. Here is a list of the top 5 highest paid CEOs for 2018, per Bloomberg. Notice, there are no women on that list. You have to go all the way down to number 34 to find Safra Katz, the co-CEO of Oracle, who received $40.4 million in 2018 in the form of options and stock awards. That's just lame.