1. Market Update: Global markets surged higher on trade deal optimism, positive corporate earnings and renewed China stimulus. Stocks closed higher four days in a row and exited correction territory (Indexes are now down less than 10% from their highs). The S&P 500 has now rallied a total of 14% from its recent Christmas Eve low and international indexes have kept pace. For the week, most major averages were up at least 2%. Last week, we highlighted these same concerns which have mostly improved this week: The Fed and Interest Rates (Green Light- on hold), Trade War (Yellow Light-perhaps turning Green), Corporate Earnings (Yellow Light looks to be turning Green), Valuations (Yellow Light), Global Economic Weakness (Yellow Light)

2. Fed, Interest Rates & the US Economy: This week Chicago Fed President Charles Evans said the American economy is doing well, allowing that “we can easily be patient” in deciding on further interest-rate increases. With the exception of a lower Consumer Confidence report today, all other reports came in as expected indicating a persistent underlying strength in the US economy. If the nation’s GDP growth for 2018 which will be reported on 1/30/19 shows an increase of at least +3% for last year, it will end a record streak of 12 consecutive years of “sub +3%” growth (2006-2017). The next longest streak in history of “sub +3%” growth is the 4 years from 1930-1933 (source: Commerce Department).

3. Trade-War Détente? Thursday evening, “sources said” that China offered to go on a six-year buying spree to ramp up imports from the U.S., in a move that would reconfigure the relationship between the world’s two largest economies. By increasing goods imports from the U.S. by a combined value of more than $1 trillion over that period, China would seek to reduce its trade surplus -- which last year stood at $323 billion -- to zero by 2024. This unsubstantiated news got stocks ripping in overseas markets Thursday and led to a strong US market on Friday. China’s Vice Premier Liu will travel to Washington at the end of the month for a new round of trade talks.

4. Corporate Earnings: The U.S. Corporate earnings season has gotten off to a solid start relieving fears of a significant slowdown in profits. The recent stock market decline had priced in a gloomy negative or zero growth outlook for corporate profits. So far, company reports are giving analysts more confidence in projecting 5-8% earnings growth for 2019. Several big banks (JP Morgan, Bank of America) have reported and indicate they are lending more and earning more on the interest yield spread than they have in a long time. Some 34 S&P 500 companies released results this week, with another 55 on deck for next week.

5. Valuations & Technicals: As we highlighted last week, the year-end sell off brought the price of stocks below their historical average of 14 times earnings. At that level (roughly 2350 on the S&P 500 Index), we saw significant institutional buying. With the 14% short term rally stocks have had off of their lows, some of the “easy money” has been made and the continued steep trajectory upward is unlikely. Look for a pause at some point in this earnings season, perhaps around the 2740 level for the S&P 500 (200 day moving average). For stocks to power higher from here, we’ll likely need to see continued good earnings reports in the short term along with positive trade chatter. For now, we’ll take the technical positives of this rally as a blessing. We are above the 50 day moving average on the S&P 500 and we have rallied above prior lows (black line in the chart below). Believe it or not, in hindsight, Trump had a good market call on December 26th: "I think it’s a tremendous opportunity to buy. Really a great opportunity to buy."  We’d like to quote a more reputable market analyst looking forward: This week Marija Veitmane, senior multi-asset strategist at State Street said "We think valuations are attractive. There’s quite a lot of bad news already priced in. Lack of bad news is good news, and we can see markets re-pricing back to higher multiples.” 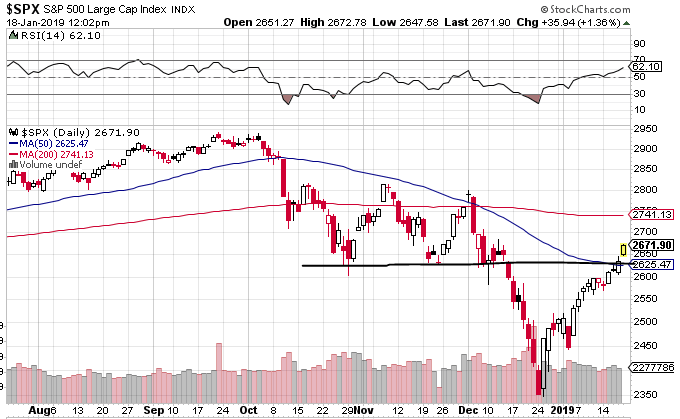 6. Global Economic Weakness is emerging as a concern to monitor in the weeks ahead.  There were plenty of headlines regarding “Brexit” this week. However, due to relative size of the British economy, slowing economic data out of China is a larger concern. China is set to announce GDP figures for 2018's fourth quarter on Monday. Reuters expects that growth slowed to 6.4 percent against the prior year's fourth quarter. In the last several weeks authorities in China have made a flurry of announcements, including tax cuts, monetary policy loosening and plans to support public spending.  A trade deal with the U.S would certainly help. Last night the People’s Bank of China (PBOC) injected over $1 Trillion in liquidity into their banking system indicating a growing level of concern. Asian shares responded favorably.