1. Weekly Market Update:  Thank God it’s Friday! Stocks closed out a rough week as Wall Street played Whack A Mole with a number of contentious issues in focus including a hawkish Fed meeting, a partial US government shutdown and ongoing trade concerns. Below we highlight additional perspective on the scope of this decline and its driving forces. We also note that some reliable technical indicators are flashing very oversold readings. For the week, the Dow and S&P 500 closed down over 7% while international stocks fared a bit better. Investment grade bonds held up well and had moderate gains.

2. The Fed Meeting: The very big news of the week was the testimony of Federal Reserve Chairman Jerome Powell who disappointed the markets with what was perceived as a hawkish stance on interest rates. As expected, the Fed hiked rates for the fourth time in 2018 and Powell indicated that there would be just two hikes planned for 2019 instead of the previously indicated three hikes.  A great many market participants have been questioning the need for any hikes. The Fed also downgraded its inflation expectations for 2019 from 2% to 1.9%.  While a decrease of a measly 0.1% may not seem like a big change, it sent a huge message. Traders were left wondering, if the Fed sees a moderating economy with lessening inflation, why raise rates?

3. Correction Update & Perspective: As the chart below highlights, intra-year declines for the S&P 500 have averaged 14.2%. At the market close today the Dow was off 16.8% from its 2018 high and the S&P 500 was down 18.2% from its high. So this year’s intra-year decline is a bit worse than average. Because this year’s decline has come at year end, it feels worse and we are running out of time for a rally.  On the brighter side, note that the S&P 500 was up 21.83% last year and portfolios that have been invested over the last several years are still very solidly in the black. Looking forward, the odds of a good year following a down year are quite high. The last down year for the S&P 500 was 2008. In the 9 consecutive up years after 2008, the average return was 14% per year.  I know, I know, little consolation right now  :). 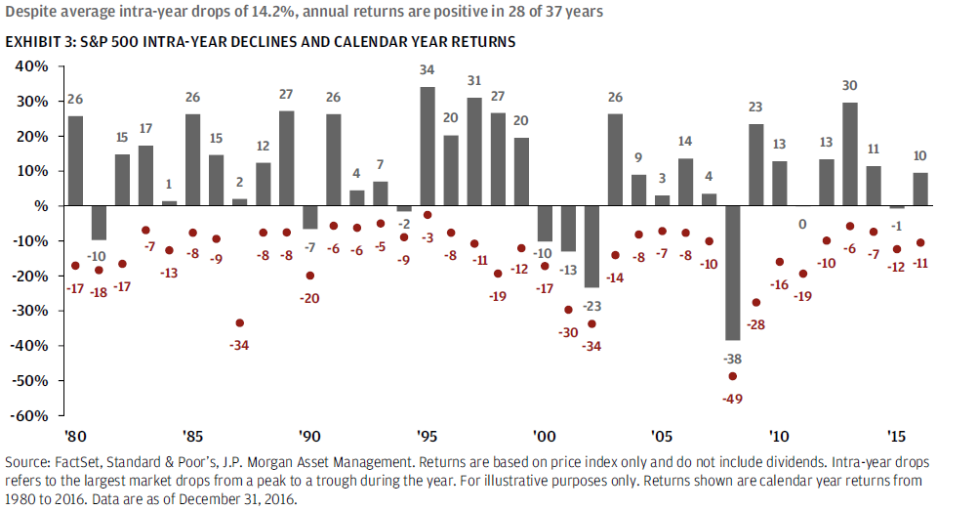 4. Timing the Market: So is it best to sit out this unsettling volatility? Over the past two decades, history shows that being fully invested is particularly important when the market is volatile. The best and the worst days tend to be clustered together. If you miss the worst days, you also are likely to miss the best. As the chart below shows, a fully invested portfolio would have returned nearly double a portfolio that missed the 10 best days in the market. The majority of the best days occur within two weeks of the 10 worst days in the market.

5. Government Shutdown: While the partial government shutdown grabbed a lot of headlines this week, typically this is not a market moving event.  The market has traded slightly up on average during the fourteen other shutdowns that have occurred since 1980. Friday the Trump Administration was still 5-6 votes away from the passage of a funding bill. The big stumbling block…The Wall. Caveat...Prior shutdowns have tended to be short lived.

6. The Economy this Week: Globally it was a light week for economic releases but the US economy continues to post sold readings which is at odds with the direction of the stock market. Earlier in the week we posted a solid jobless report and a positive GDP revision. Today personal spending and personal income numbers were in line with bullish expectations and the Consumer Sentiment number came in at 98.3 ahead of the 97.0 estimate.  China Stimulus-  China’s top policy makers announced “significant” cuts to taxes and fees in 2019 and signaled an easier monetary stance, as the government tries to halt the slowdown dogging the economy this year. Significantly, they used language reminiscent of 2014, before the People’s Bank of China cut benchmark interest rates and bank reserve requirements.

7. Technical Indicators Flash Oversold Buy Ranges: The two charts below are flashing readings not seen since the major market bottom in 2008. The first chart tracks the new lows made by stocks that trade on the Nasdaq stock exchange. The blue arrows highlight when this indicator has flashed extremely oversold levels. Similarly, the following chart from the Chicago Board Options Exchange (CBOE) tracks the amount of protection, through options, that investors are deploying to protect portfolios. This indicator is also flashing a significant buy signal. The combo of these two indicators flashing “Buy” has traders alert to a reaction to the upside in the relatively short term. We’ll see 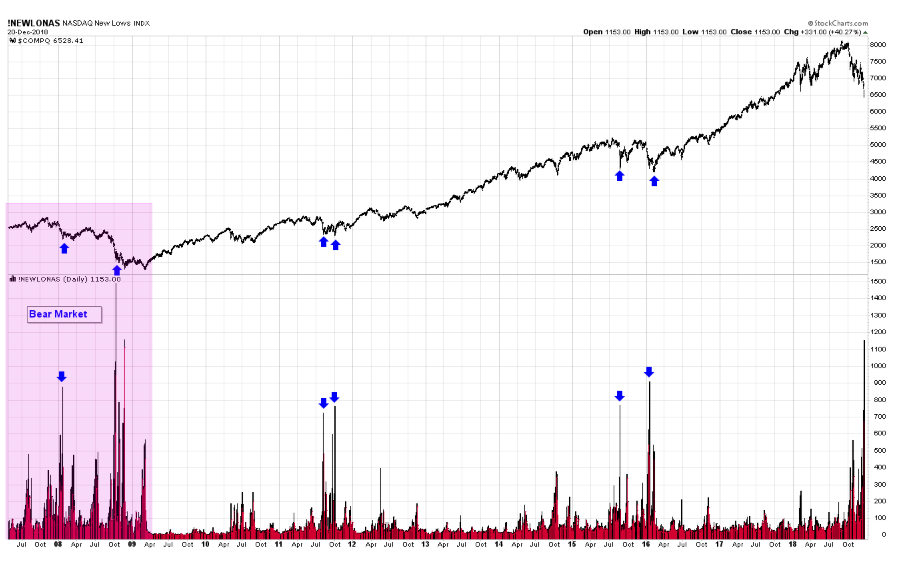 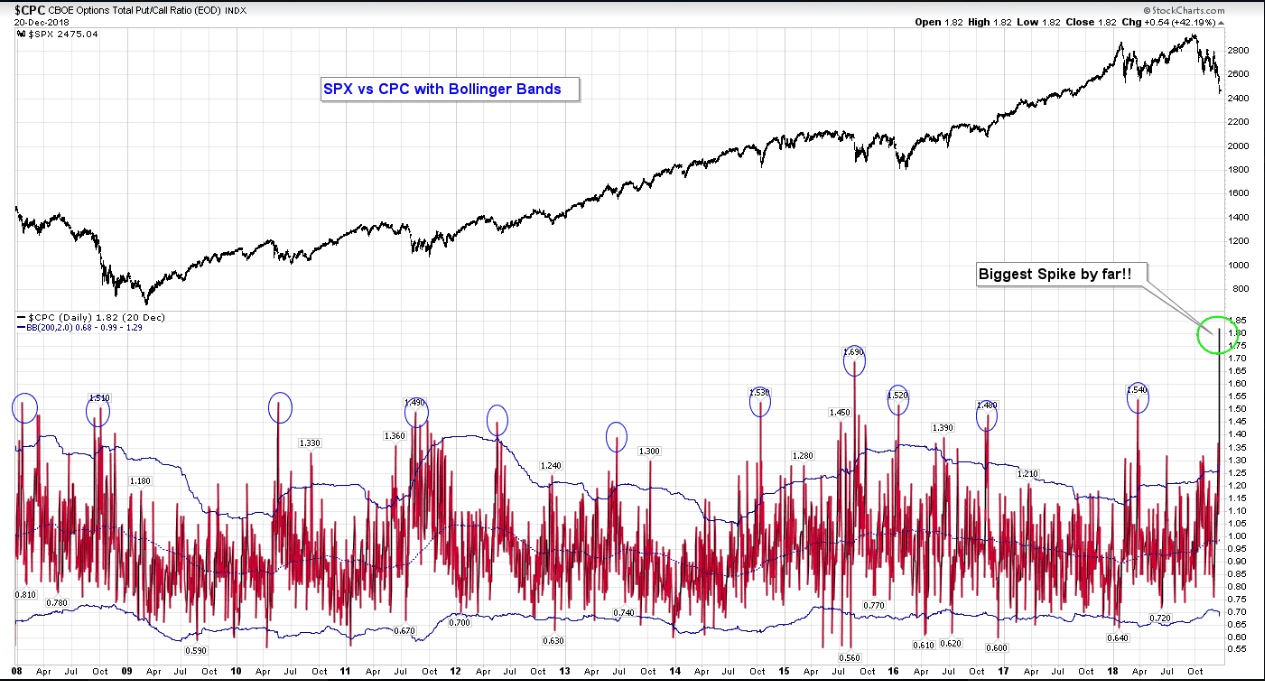