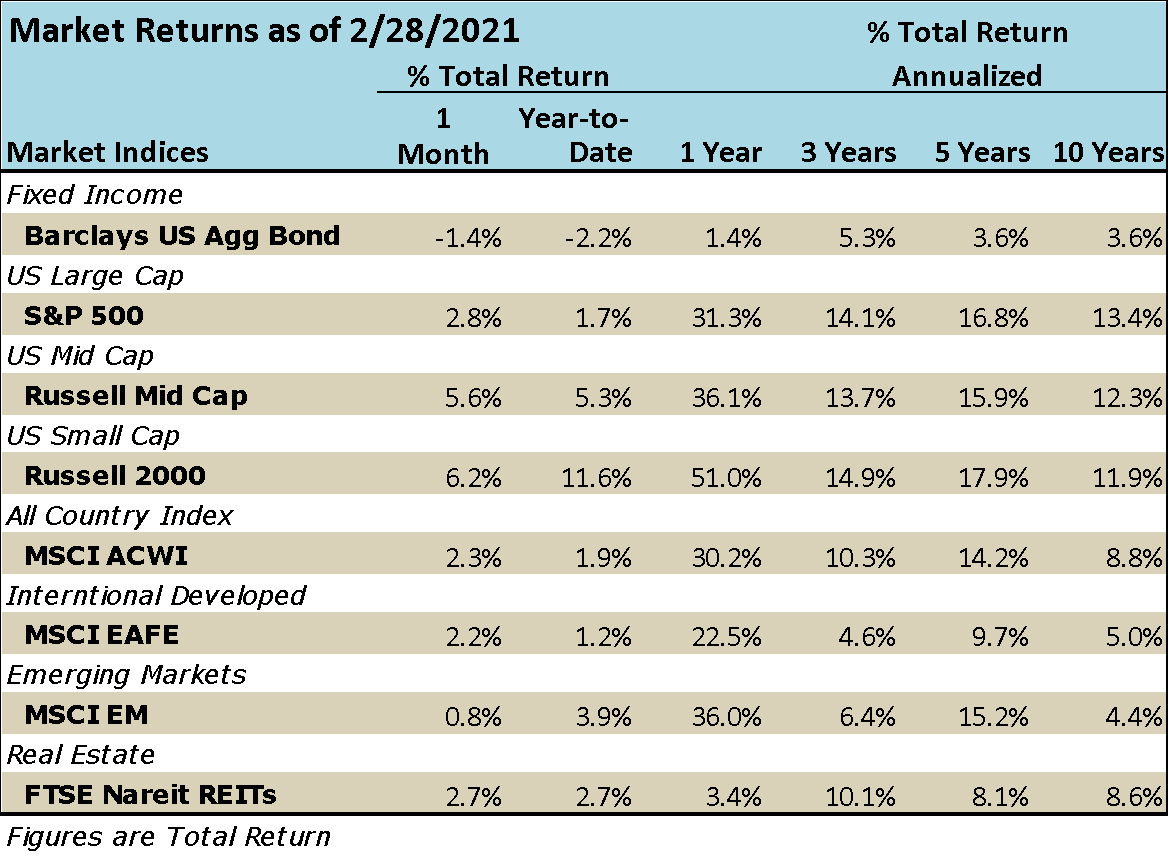 FEBRUARY EQUITY MARKETS:  After a slow January, stocks made a strong recovery in February due to a number of macro events:  progress on stimulus, continued low rate policy confirmation, reduction in COVID-19 cases, strong economic data, and constructive corporate earnings.

As investors began to think about the pace of economic reopening, those sectors that would benefit most were up the most in February.  Within the S&P 500, the energy sector rallied 23%, followed by financials up 11%, and industrials up 7%.  Overall, the S&P 500 rose 2.8% in a short month, but was once again the laggard behind mid cap stocks (up 5.6%) and small cap stocks (up 6.2%).  The graphic below show the recent resurgence of the “reopening” stocks (purple line) versus the “stay at home” stocks (in blue).

Technology stocks, which were the primary driver of performance in 2020, have taken a breather to start off 2021 with only a 1.2% gain within the S&P 500.  The healthcare sector also cooled off a bit with a -2.1% decline in February.

Domestic equities were a bit stronger during the month than their international counterparts, but we still believe that international stocks will have a good 2021.  In addition to more attractive valuations that we spoke about in January’s Perspectives, we also think the rotation into more cyclical sectors will favor equity indexes outside the U.S.   This is because international markets have much heavier weightings to financials, materials, and industrial versus the U.S. which is more technology and healthcare heavy (see graph below). 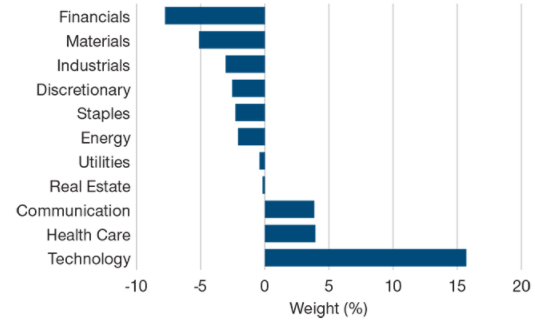 FEBRUARY BOND MARKETS: The bond market sold off in February as investors positioned for accelerating growth and inflation in the future.  Rates backed up significantly the last week of the month, but we have to keep in mind why long-term rates were rising.  The market is now more optimistic about economic growth, government  stimulus,  deficit spending, the vaccine rollout, and the downward case/death trends of COVID-19.  In short, higher GDP and reflation prospects are a good thing because it means we are healing and growing.  In this environment, you would expect long-term rates to move higher (just not all in one day which it felt like on the 25th)!

SANDY COVE MADE CHANGES TO CORPORATE BOND ALLCOATION LINE UP: Sandy Cove Advisors made two bond allocation shifts to better position portfolios given the ongoing rise in the long-dated yields (and therefore the decline in long-dated bond prices).  We removed the bond index ETF, “iShares Core US Aggregate Bond ETF (ticker AGG) from client accounts.  In its place, we invested in a combination of an actively managed bonds fund and a shorter duration bond ETF (ticker BSV).

While the iShares Core index fund is a low-cost, broad investment grade bond fund, it can only match the performance and duration of the Bloomberg Barclays Bond Index.  Conversely, an active manager who can anticipate changes in credit quality and duration can shift the portfolio for better performance.   We also believed that the addition of a short-term bond fund would help lower the overall duration of the bond allocation and better insulate it from negative price moves.  As you can see from the chart below, the short-term bond ETF (ticker BSV in green) has fared much better year-to-date than the index fund (ticker AGG in blue).

The Vanguard Short-Term Bond Index Fund has a duration of 2.7 years versus the Bloomberg Barclays Index of 6.0 years.  A lower duration will insulate against negative price moves brought about by the rise in interest rates.  As the graph below illustrates, the impact of a 1.0% rise in interest rates has a more adverse price impact on longer dated maturities. 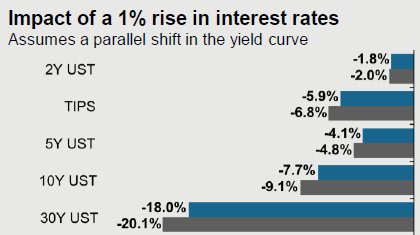 Municipal bonds fared better than corporates in February, but still had a down month as yields jumped higher (and prices fell).  Indeed, the 10-year muni yields jumped 42 basis points (+0.42%), the largest calendar-month move since November of 2016!  Lower quality credits did better than higher quality counterparts putting the performance of many high quality managers at a disadvantage for the month.  However, many managers used the month’s volatility to sell lower yielding bonds, hold cash, and then reinvest into higher yielding bonds by month end when rates jumped higher and bond prices became more attractive.

Despite lackluster returns in the first two months of the year, both corporate bond and municipal bond fund flows have been positive, taking in cash at a strong pace.  One look around the globe will tell you why the U.S. bond market is getting cash allocated to it.    As of month-end, the U.S. aggregate bond yield was 1.42% compared to Germany with a negative -0.08% bond yield, Spain at 0.25%, Japan at 0.2%, Italy at 0.48%, and U.K. at 1.05%.  Our low U.S. rates are still the best yielding.

FED & GOVERNMENT ACTION: Biden’s $1.9 trillion CARES Act moved one step closer to passage as the House of Representatives passed the bill in late February (no Republicans voted in its favor).  In the Senate, Chuck Schumer was able to remove the $15/hour minimum wage portion of the bill that irked Republicans.  That elimination could pave the way for easier passage in the Senate.   The Democrats’ goal is to have the bill ready for Biden’s signature by March 14th when unemployment aid is set to expire.

COVID-19 UPDATE:  Cases and hospitalizations are declining dramatically, but the reason cannot be attributed to vaccines alone, which have only been distributed to about 15% of the population at this stage. 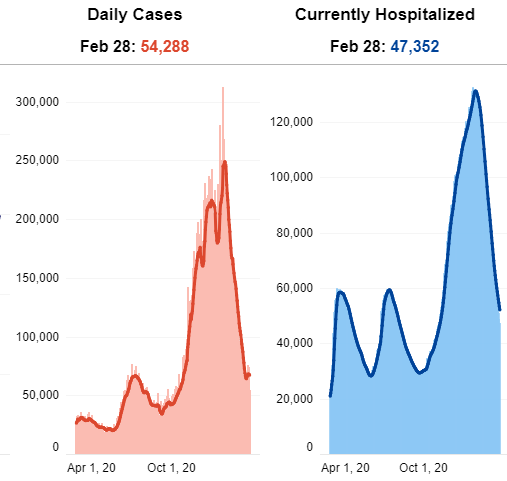 Still, the vaccine rollout to the elderly, as seen by the graph below, has likely contributed to the lower hospitalizations.  While we know of at least three COVID-19 mutation strains, they have not materially altered the path of case/death declines.  Hopefully, that remains the case as more of the population inoculated will help combat the strains’ ability to replicate. 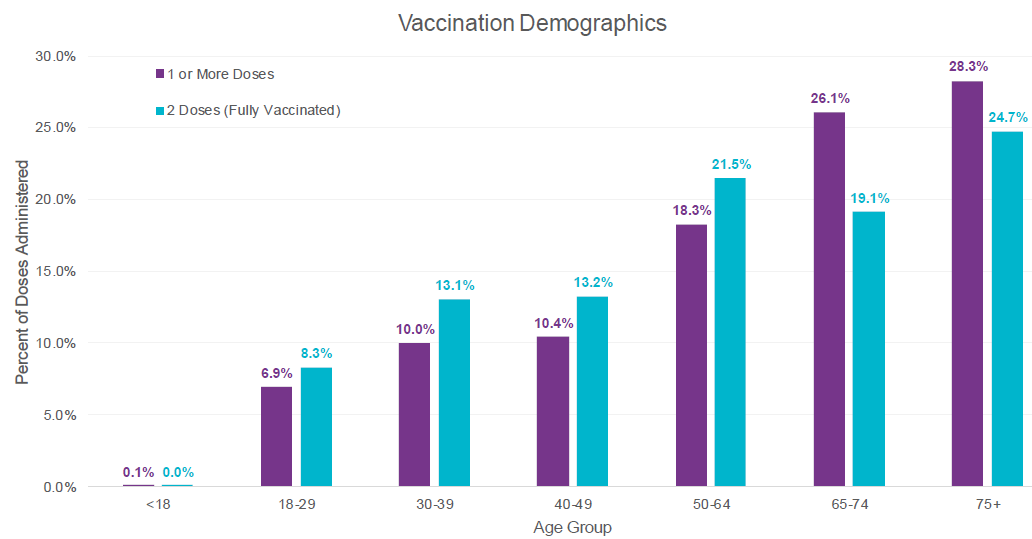 Vaccination forecasts vary depending on the supply figures (now increased with the new J&J drug) and how many citizens will opt to get the vaccine.  Optimistic forecasts put U.S. herd immunity by the end of July, assuming 600 million doses available, 420 million doses administered to at least 190 million adults, representing a 75% inoculation rate and herd immunity.  More pessimistic forecasts assume immunity to be achieved in September/October.

ECONOMY:  Economic indicators reported in February were stronger than January’s mixed results.  The consumer showed no sign of slowing down after the holiday season and surprised most economists with a strong 5.3% spending increase over December (consensus expectations called for 1.1% growth).  While online retail still showed healthy growth, as was the case during the height of the pandemic, the month did show positive sales from department, sporting, hobby and book stores, according to the U.S. Census Bureau, which tracks these monthly figures.   The consumer could provide a huge upside surprise to GDP and will be intensely watched.  With the U.S. consumer accounting for roughly 2/3rd of GPD, the continued global stimulus, record household cash reserve, increased household assets, and 40-year low consumer debt service ratio, could propel GDP figures higher than the 5.0% consensus expectations.  This would be a strong catalyst to move equities higher. 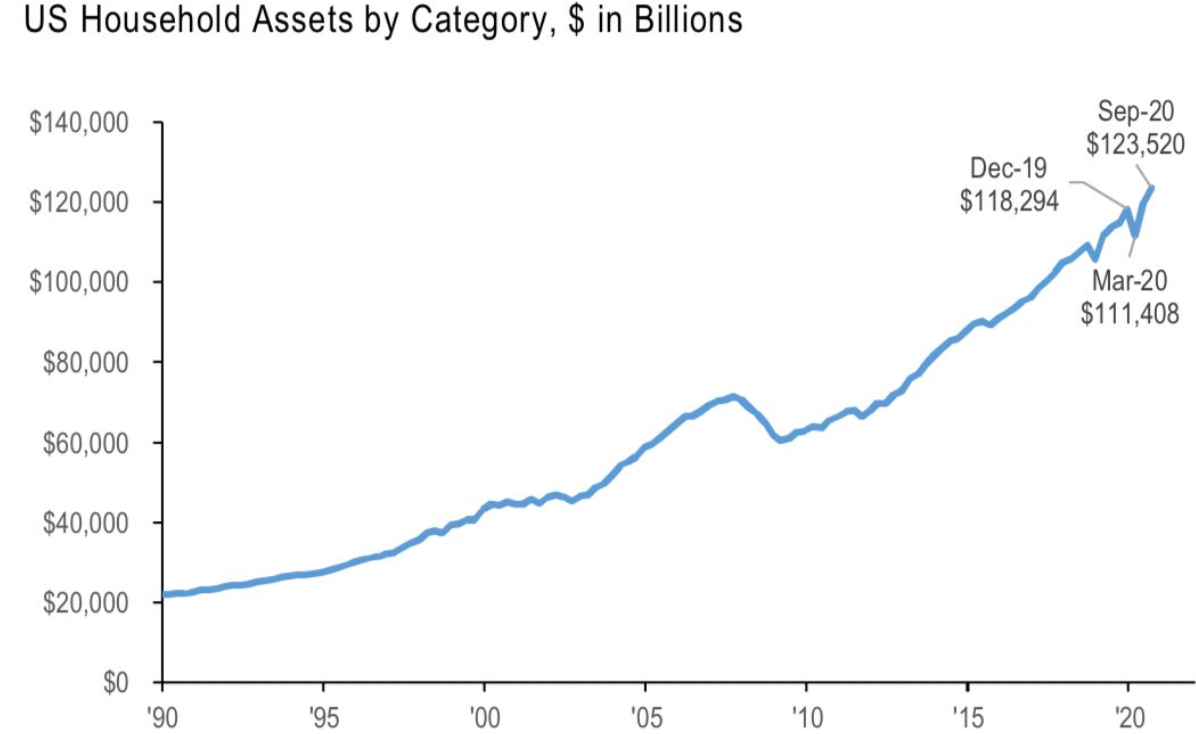 In conclusion, we are feeling a bit more optimistic about the health of the economy and the path to reopen.  We are not shifting our positive 5-8% equity growth outlook we published in January just yet, but admit given the current data we are seeing, we may have understated the market’s potential in 2021. 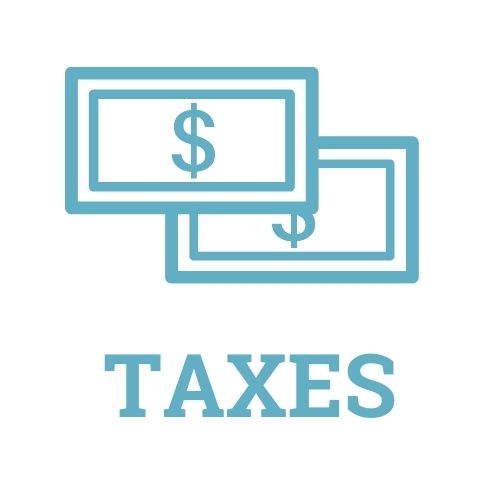 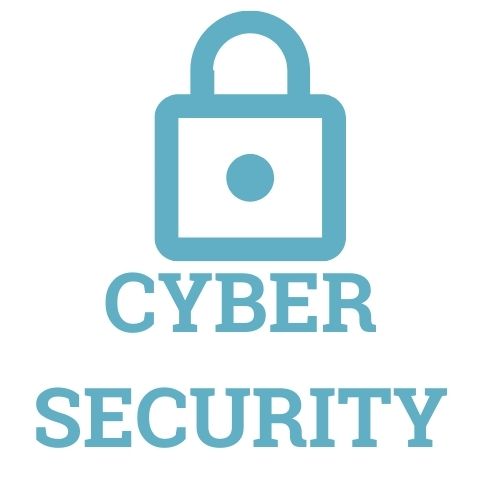