1. Market Stats: US and International stocks took a hit this past week as the anticipated pace of rising US interest rates caught some investors off guard. As the rate on the US 10 Year Treasury rose to 3.23%, asset allocators and investors are believed to be trimming their riskier equity holdings in favor of the now higher riskless returns offered by Treasuries.  While the economy continues to report strong numbers, commodity prices are lifting with bond yields.

2. Chart of the Week: US Treasury Yield Short Term Spike: 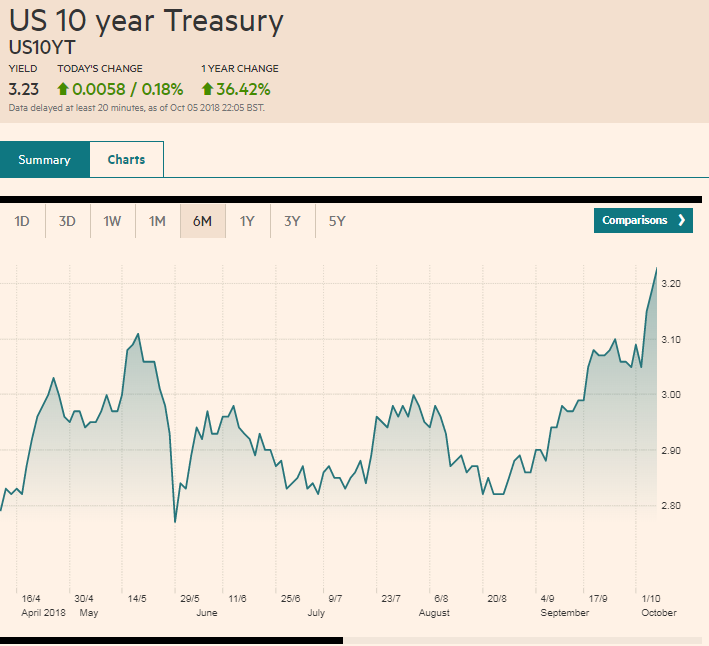 Multi-year spikes for the 10 and the 30- year US Treasury bond yields are reinforcing the fact that the U.S. economy is really strong right now. This week, the yield on the 10 year Treasury note hit its highest level since July of 2011, and the yield on the 30-year hit its highest level in four years. Why it Matters: If you own a mortgage or finance a car, the yield on the 10-year Treasury note is a critical metric that directly impacts your own bottom line. The fact that the 30-year yield is also rising implies that the economic growth we are experiencing feels sustainable to both U.S. and global investors. Strength in both the 10- and 30-year Treasuries is good news for savers and fixed income investors, who have been suffering for nearly a decade of low yields.

3. October is a Scary Month for Stocks!  Not Really. Average monthly percentage changes for the Dow Jones Industrial Average for the month of October have been positive 0.40 percent during the past century. During the past 50 years, returns have been 0.84 percent in October, for an annualized return of 10 percent. And if we consider just the past 20 years — a period that includes the dot-com bust, the financial crisis and a 13-year bear market — the Dow was positive in 15 out of those 20 years, gaining an average of 2.5 percent in October. Annualized, that would be a 29.9 percent return — the best performance of any month on the calendar, according to Bespoke. The Standard & Poor’s 500 Index has behaved in a similar fashion. This is hardly the stuff of nightmares. Twain wrote “October: This is one of the peculiarly dangerous months to speculate in stocks. The others are July, January, September, April, November, May, March, June, December, August and February.”

4. Not Nafta: US-M-C-A sound like a new tune by the Village People? It is the acronym for the new NAFTA. The new deal, which will be called the U.S.-Mexico-Canada Agreement, or USMCA, has few surprises in the details, and could be viewed as more of a Nafta update than a substantial rewrite of the previous deal. Congress is unlikely to approve the deal until 2019. As far as trade worries went this week: Young man, there's no need to feel down. I said..

5. US Flexes Economic Muscle: The size of the US economy is now $19 trillion. The 28 nations in the EU share a $17 trillion economy and China's GDP is about $12 trillion. This year, the US economy will grow about 3.1%; that will add $590 billion to GDP. That increase is as large as the GDP of Taiwan, almost as big as Argentina, and would rank as the 22nd largest nation in the world. -Elliot F. Eisenberg, Ph.D.

6. Pic of the Week: From Geek to Terminator: Jeff Bezos sprints to the top of the Forbes 400 List this week. 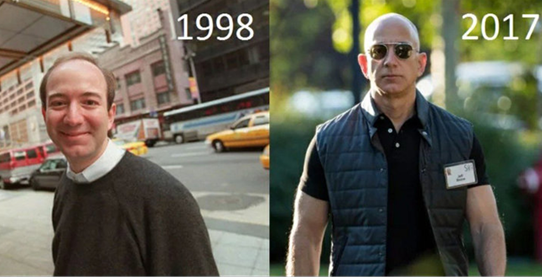 The Amazon CEO saw his net worth rise to $160 billion, and $78.5 billion of that was added in just one year. Thank you Prime members and Amazon Web Services, the fastest growing and most profitable division inside Amazon (Nice to see Amazon is sharing a little wealth as they raised their minimum wage to $15 an hour this week). Bill Gates, Warren Buffett, Mark Zuckerberg and Larry Ellison round out the top 5 wealthiest Americans. No surprises there. They are collectively worth about $460 billion dollars. President Trump saw his rank decline 11 spots since last year and 138 spots since he announced his successful presidential run in 2015. Forbes estimates his net worth at $3.1 billion.