With opposing news flow and rhetoric hoping to influence our vote on November 3rd, we thought it would be helpful to provide an impartial analysis of the major issues and put some context around the myriad of information you’ll be seeing and reading during the next three months.

First, let’s review past performance and behavior of markets during election years.

What We Can Control:

Given that COVID-19 cases are still rising in the U.S., expect a higher prevalence of absentee voting.  This means many high-profile elections (presidential and senate) will not be determined on election day or potentially even a week after the election.

The nominating conventions for both parties have not been held yet so the presumptive candidate(s) for the Republicans is Donald Trump / Mike Pence and Joe Biden for the Democrats.  Joe Biden is expected to name his choice for vice president sometime in the next few weeks.

The candidates would probably try to implement different policies based on their political views.  It is assumed that Trump would continue to focus on deregulation, lower taxes, and protectionist economic policies while a Biden win could usher in higher corporate and personal taxes, expanded healthcare access, and climate change mitigation policies.

We have seen preliminary Biden tax policy proposals from the Tax Foundation.   Biden’s proposals aim to raise an additional $3.0+ trillion in tax revenues over the next decade and is targeted mostly at the highest income earners and those receiving the most of their income from investments.  The probability of some of these proposals making their way to law would hinge greatly on the Senate election outcomes and which party controls that side of Congress.

Senate Election:  Currently the Republicans control the Senate with 53 senators vs. 47 for the Democrats.  However, with less than 100 days before the elections, opinion polls indicate that the Democrats appear to be leading in more Senate races which could change control of the Senate.  As we mentioned before, polls cannot always be trusted and outcomes are impossible to forecast.  The Senate has had along history with changes of control numerous times as denoted by the graphic below. 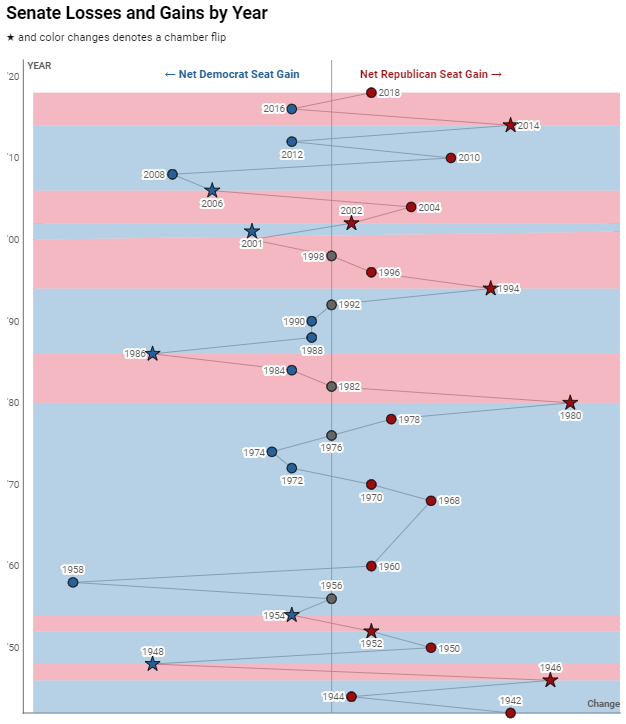 Source:   The Cook Political Report, Jessica Taylor, “Almost 100 Days Out, Democrats are Favored to Take Back the Senate”

Possible Election Scenarios:  When one party controls Congress and holds the office of the President, they are better able to pass legislation that incorporates their policy beliefs.  A divided government faces more negotiations and stalemate gridlock.

If either party is the beneficiary of “A Wave” then it is fair to assume they are in a stronger position to implement their policy views.

Conclusion:  Talking heads will shout attention getting headlines to get ratings and keep you glued to their channel, webpage, radio station, etc.  They’ll tell you this time is different.   As a concerned citizen, be involved and vote.  As an investor, try to tune out because the long-term performance of the market is more a function of corporate earnings and consumer demand than political control (see chart below).