1 Weekly Market Update: Just as we were rolling along through the summer, not expecting any major hiccups regarding one of the most anticipated rate announcements ever, we got two big surprises. The first surprise came not in the Fed’s decision to lower rates by ¼ point (that was highly expected), but in the Fed Chairman’s awkward language in the press conference that followed. The second surprise came in President Trump’s announcement of new Chinese tariffs, which many believe were in large part inspired by the Fed’s language.  The net result, stocks sold off 2-3% for the week. Below we take a look at the factors affecting markets this week: Trump’s Tweet, Powell’s Fumble, Strong Jobs Numbers, and Investor Fear, Flows and Greed.

2. Fed Fumble: On Wednesday we got the first Fed Funds rate cut in 10 years and it should have been a positive for the markets. However, in his post rate cut press conference, Fed Chairman Jerome Powell managed to give markets a rough ride as he discouraged investors from betting on a longer-term easing cycle.  After wild swings, as investors struggled to parse Powell’s message, markets ultimately gave it the thumbs down – and President Donald Trump was also not pleased. “As usual, Powell let us down,” Trump said in a tweet. Trump had been calling for a cut that was aggressive enough to fight the trade and currency battle’s he’s waging. Trump wants a lower US Dollar.  A cycle of continued rate cuts, in a competitive world, is needed for Dollar weakness.  Other central banks around the world are clearly in easing (rate cutting) modes. Here’s a look at the market’s reaction to Powell’s statement that “this cut is different from the start of a lengthy cutting cycle.”

3. Tariff Man Strikes Again (Trump Trade Tweet in Reaction to Fed Fumble): While not explicitly stated, many investors believe that the Trump administration’s imposition of more tariffs on China (10% on another $300 billion) was a direct result of the Fed’s language on Wednesday. Trump wanted to see the Fed deliver an easing cycle, not a mid-cycle adjustment that might be viewed as a “one and done” situation. Trump’s tariff ploy may work. The surprise tariff announcement does make the probability of another Fed rate cut, to support markets, more likely. Here’s the intra-day market reaction to Trump’s tweet Thursday: 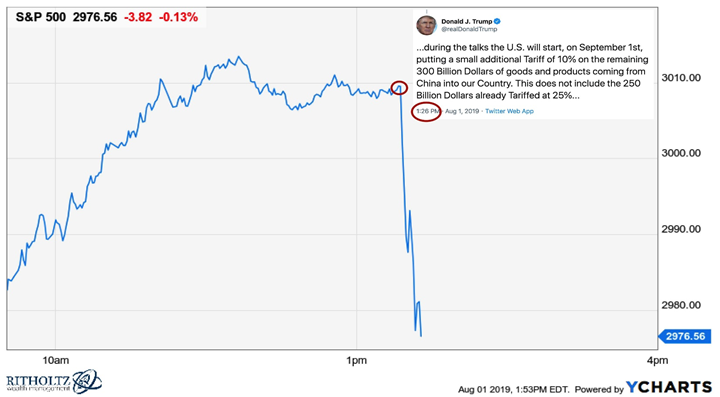 4. Double Whammy: Taken together, the new tariffs and the uncertainty of the direction of US interest rates, led to the worst two day performance for stocks since May. Note that we are still just 3-4% off all-time highs. Just for context. 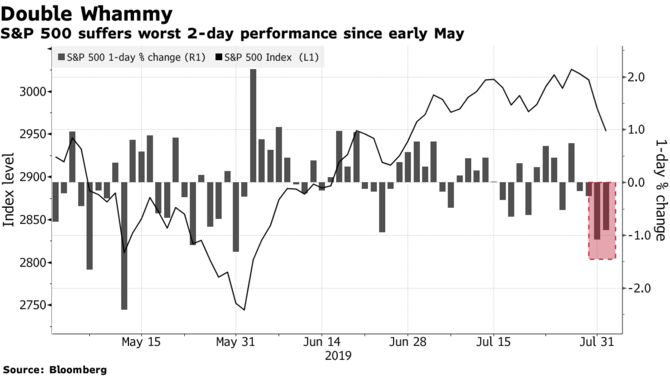 5. The US Economy is Doing Just Fine if Jobs Are Any Indication.   After all the volatility from the two events mentioned above, we did get a small "all clear" sign for the US economy. There were no surprises in the July Jobs report that was released today. The Labor Department reported the U.S. economy added 164,000 positions in July with the unemployment rate staying at a very low 3.7%. Wage growth remained solid.

6. Investors are Cautious: Investors are piling into safe-haven bonds at a record pace, a sign that caution remains despite stocks hitting recent records. Mutual funds and exchange-traded funds tracking bonds posted $12.1 billion of inflows for the week, the 28th consecutive week of inflows. That brings the total so far this year to $254 billion, on pace for a record $455 billion on an annualized basis in 2019, according to a Bank of America Merrill Lynch data.  Mutual funds and ETFs tracking U.S. equities have posted $45.5 billion in outflows year-to-date, BAML said.

7. Checking in on the Fear & Greed Index: Investor are fearful and that can be a good thing. Negative sentiment is just one sign of a potential turn in the market. Normally once this gauge moves to the “extreme fear” region, it has made sense to start putting money to work in stocks. 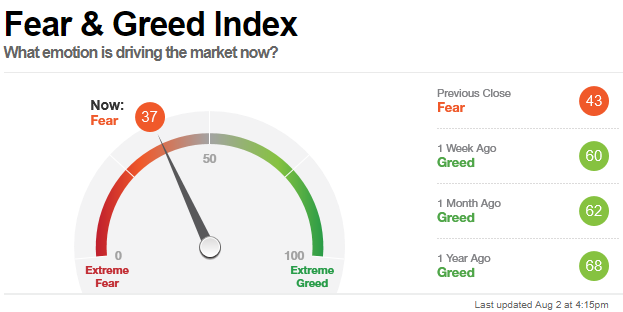 • You Are What You Watch? The Social Effects of TV (The Upshot) – Courtney

• Exercise makes you happier than having money, according to Yale and Oxford research (World Economic Forum) –Rob