AUGUST EQUITY MARKETS:  The broad market finished its seventh straight positive monthly return in a row.  Much of that rise came from genuine excitement of stronger than expected earnings growth.  The corporate earnings picture was quite robust with companies beating expectations and raising guidance for the remainder of the year.  This picture played out in many well-known names like Marriot, United Airlines, KKR, Netflix, ConocoPhillips, etc.  In addition to corporate reports, we also saw solid economic data, a Fed that continued to be accommodative, and a population edging closer to herd immunity from COVID-19.  It felt like the “Summer of Market Love” with positive stock returns in August catapulting us to new market highs for the S&P 500 and the NASDAQ.  Growth stocks again outperformed their value style counterparts, for the third month in a row.

Along with strong stock markets, typically comes strong merger & acquisition deals and this year has been no exception.  The chart below illustrates the global deal volume by market cap, over the last nine years and 2021 year-to-date.   These deals include the flurry of SPACs (or blank check companies) that we wrote about earlier in the year, in addition to corporate combinations (AT&T buying Discovery, Amazon buying MGM, Microsoft buying Nuance Communications, to name a few). 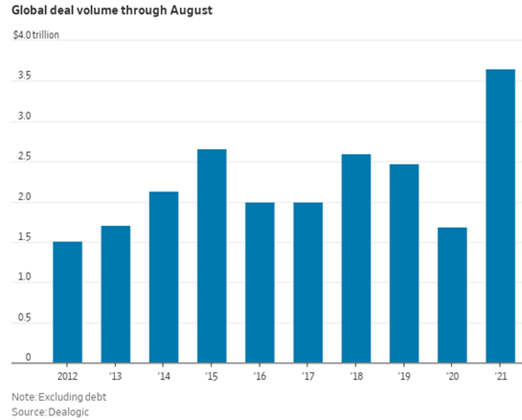 International stocks also got a positive bid in August and emerging market stocks rebounded from their recent pullback rising 2.6% for the month.  As you recall, last month the emerging market index fell -6.7% during the month due to severe COVID-19 outbreaks.  Also impacting the decline, was pressure on Chinese equities as the Chinese government proposed restrictive laws in the technology and education spaces.

We titled this monthly piece, “The Summer of Market Love” because that is how it felt to us.  Hardly a down market day to be had, continued record breaking closes, and the ability to shake-off what little bad news was in the marketplace.  Like summer, hot days eventually come to an end, but it has been a nice stretch to be invested in equities, for sure!

AUGUST BOND MARKETS:   Interest rates drifted slightly higher in August, rising 8 basis points to end the month at 1.31% yield. As prices move in opposite direction from rates, the Barclays Aggregate Bond Index fell slightly during the month by -0.2%.  The biggest catalyst for bond markets came at month end during Fed Chairman, Jay Powell’s speech at Jackson Hole.  This was a widely anticipated speech which had all eyes on it.  As you recall, last year’s Jackson Hole speech provided the markets with a whole new approach to how the Federal Reserve views inflation.  The Fed signaled in 2020 it was willing to have inflation run a bit hotter than the 2.0% target and even stay above that target over a short period of time before it would raise rates.  Perhaps that was great forecasting, or great positioning in front of this year.  The year 2021 has been the year of inflation as we were seeing price increases in all areas of the economy.  The latest consumer pricing index (CPI) stood at a 5.4% increase, well above the Fed’s long-term target.  Yet Powell’s Jackson Hole comments this year were that inflation is still transitory and the Fed does not feel the need to raise interest rates.   What the speech did signal was that the Fed may be willing to begin the tapering of bond purchases ($120 billion purchases per month).  However, the speech made clear than any bond tapering would not necessarily start the clock on interest rates increases.  The Fed looks at these two stimulus actions independently.

Municipal bonds had a slightly negative month down -0.2%, but this was only the second time all year this asset class posted a negative monthly return.   The technical conditions of supply and demand were still in strong demand and mutual fund flows proved that point with $11 billion of inflows, the highest monthly figure since February, and on a record pace for the year.

ECONOMY:  We highlight a few economic indicators reported in August that were a mix of both strong and weak results for the second month in a row.  The consumer can react quickly and likely did just so in August as fears of rising costs and the spread of the Delta variant played across the news media.   Consumers were likely touched by one or both of those fears during the month.

One last word on inflation from us, which we are watching like a hawk.   We are firmly in the camp that this new level of pricing is here to stay.  While we have already seen some commodity prices abate, we are seeing the more stubborn kind of inflation (wage inflation) creep slightly higher.  If inflation is here to stay and we have a CPI reading for the full year at about 2.5%, then the U.S. is operating with negative real interest rates (real rate = nominal yield – inflation rate).   Ultimately, we think the 10-year treasury yield will have to rise as it has done in history when similar inflection points were reached.  When, how far, and how fast are all questions we wish we could answer, but the crystal ball is once again beyond our grasp!  Our response to inflation has been the addition of the PIMCO Inflation Response Fund to most clients’ portfolios.  We will continue to monitor these conditions and add to this inflation hedge, if we think it is prudent.

The U.S. Senate finally passed a federal infrastructure package, but its fate remains unclear as the House debates whether to tie it to a $3.5 trillion “human infrastructure” bill that faces far more opposition.

GOVERNMENT ACTION:   The Senate passed a $1 trillion infrastructure bill, but the House continued to debate the fate of its own $3.5 trillion for its infrastructure package, which includes human infrastructure.  The House bill faces plenty of opposition in terms of size and how to pay for it, so the market may be reacting to new tax proposals in coming weeks as the debates heat up in Washington.

COVID-19 UPDATE:  The highly virulent Delta strain of COVID-19 continued to spike in mostly southern states with the majority of hospitalizations being unvaccinated patients.   We are hearing of many “breakthrough” cases of vaccinated individuals, which is unfortunate.  Medical professionals remind us that the vaccine is not 100% efficacious, and if contracted, it provides the infected with a much better set of symptoms and outcomes.  We look forward to the month when this topic no longer needs mention in our newsletter.

SEPTEMBER MARKETS:  As we enter early fall and put summer behind us, the market statisticians tell us that it may not be as smooth sailing as the summer months.  In fact, there is over a century of data that shows September being a poor month for stock markets, on average (see table below).

But let’s not lose sight of the long-term strategy of investing. Over those 120 years, stocks have posted positive returns 87% of the time over any three-year period and been positive 97% of the time over any ten-year period, including “bad” Septembers.1 Bottom line, we need to take a potentially poor month in full perspective, especially after a string of seven straight up months for the S&P 500.

With back to school, some folks returning to the office, and Congress reconvening to the bargaining table on a stimulus package, it’s sure to be an interesting fall season on many fronts.  We hope you had an enjoyable summer and look forward to a wonderful fall and Go Pats!  As always, we welcome your comments.