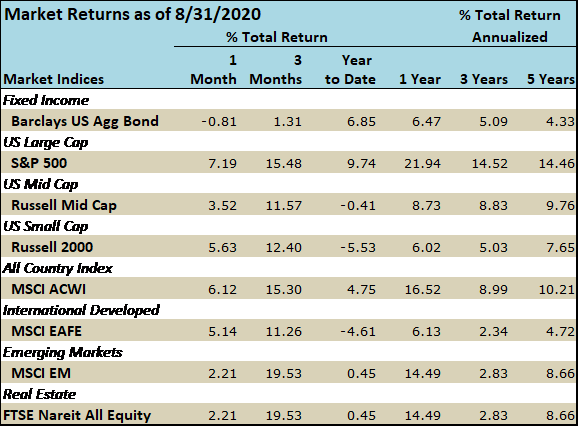 EQUITY MARKETS:  Equities continued their torrid march forward in August.  Positive returns were recorded around the globe as noted in the chart above. There were a few days of solid sector rotation out of technology and into more value-oriented sectors like consumer staples and utilities, but by month-end the technology sector performance was once again the highlight (NASDAQ returned 11.1% in the month).

Our tech-heavy U.S. indexes are benefitting from market share breakthroughs for companies associated with e-commerce, the cloud, video streaming, and a 5G roll-out.  Combine these strong secular forces with historically low interest rates, Fed easing and weak inflation and you can understand why equity assets continue to rise.

We compiled monthly S&P 500 returns for the last three years to put into context the pace of returns over the last few months after the large sell-off in February and March 2020. 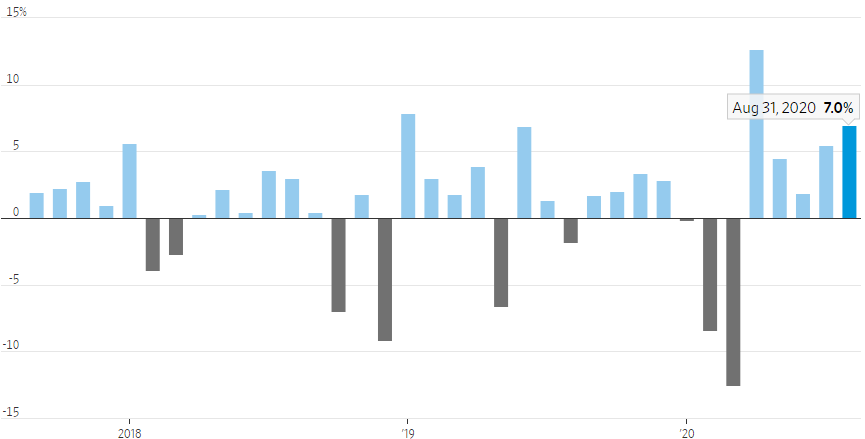 Stocks are also being shaped a bit more this year by the average retail investor.  The so-called “Robinhood Effect” is a culmination of zero trading costs for stocks, a bull market, and the rise of new online brokerage firms like Robinhood.   According to Citadel Securities’ head of execution trading, individual investor activity has climbed to 25% of total market volume during some days this year.  For the first half of 2020, individual investors accounted for nearly 20% of the shares traded versus about 15% last year and 10% in 2010, notes Bloomberg Intelligence Head of Market Structure, Larry Tabb.  While the average investor does not have the volume capacity to move entire markets, we have seen some stocks make dramatic moves, Eastman Kodak, Hertz, Novavax to name a few, based on the increased number of trading accounts at Robinhood.

EQUITY MARKET UPDATE (EARLY SEPTEMBER):  As we were writing this piece for August, the markets in early September were moving off their all-time highs.  Technology stocks, up 12% in August, are off 6.3% in the first five trading days of September.  There is no specific news attributable to this decline, but the tech trade has gotten extremely extended, as we’ve noted and the S&P 500 Growth index was sitting 26% above its 200-day moving average, which is the most extended that index has ever been.  It was time for a constructive sell-off, which this looks to be.

BOND MARKETS:  Interest rates rose in August, with help from better economic data and an accommodative Fed. Both government and municipal bond curves steepened during the month with longer-dated bonds rising more than short term ones.  The treasury yield curve move is pictured below with the August curve in red versus the July curve in blue.  What seems like ages ago, pre the COVID-19 Fed response, is the dotted line of the yield curve at the end of 2019 when a 2-year Treasury bond yielded 1.57% versus just 0.13% today.

Bond prices move in the opposite direction of rate increases, thus the benchmark Barclays US Aggregate Bond Index had a modest price sell-off of - 0.81% during the month.  Looking at year-to-date returns, positive performance still exists across all nearly all fixed income sectors and segments.

MUNIS:  Despite the low rates, high quality municipals still offer a better yield than government treasuries across the curve.   As of month-end, a 10-year AAA-rated municipal bond yielded 0.81% versus 0.71% for 10-Year Treasury.  Municipal market had another healthy month of issuance with $46 billion coming to market, a 10% increase from August 2019.  Demand for all these issues is still robust.   Inflows into muni bond funds were again positive and are up $14 billion through August 31st.

CASH:  Cash levels remain as evidenced by the money supply (M2) which is a broad measure of cash, including checking deposits, time deposits and money market accounts.  The graph below shows money supply (M2) tends to lead equity market performance by about a year.

ECONOMY:  Most monthly economic releases were again better month-over-month and a surprise on the upside.  Major categories like housing (mortgage applications), manufacturing (purchasing managers’ index), and consumer activity (credit card transactions, TSA traveler traffic) all improved providing a bright spot on the data front as we continue to grapple with the pandemic.

Inflation is still running low with Core CPI coming in at 1.6% for the 12 months ended July 2020. Core excludes certain volatile prices for food and energy.  The Fed’s target rate for inflation is 2.0% so we are still below trend.  However, a larger discussion of what inflation will look like when we come out of the crisis is one being debated now.  The large monetary stimulus will create a debt to GDP ratio of about 98% according to the Congressional Budget Office.  With excess cash in the economy and a consumer that will hopefully begin to recover, we’ll likely have the two main ingredients for inflation.  The timing and speed of the recovery will be a determining factor as well as any Fed response (raising rates to offset an overheating economy).  Ultimately, the Fed could raise rates which will make it more expensive for the government to service its debt.  To pay for the added interest cost we could see higher taxes and lower government spending which could ultimately create a long period of slower growth.  While we are hopeful to be talking about economic rebounds and an overheated economy, we think that is still a way off and not something we are positioning for today, but we have our eyes on that long-term possibility.

Unemployment rate moved down sharply to 8.4% from 10.2% in July.   Weekly initial claims finally broke below the 1M level to 881,000 claims for the week ending August 29th.

FED & GOVERNMENT ACTION:  The Fed held its annual meeting in Jackson Hole, WY during the month and Jay Powell, Fed Chairman, outlined a much-discussed new policy to deal with inflation.  Instead of making pre-emptive rate hikes to keep future inflation from rising above the 2.0% target, the Fed will now allow more flexibility in the rates where the average over a cycle would be 2.0% and could allow the economy to temporarily overshoot that target.

In Washington, our elected officials failed to deliver a much anticipated fourth stimulus bill aimed at helping consumers, businesses, and municipalities alike.  The two parties are literally trillions of dollars apart and showed no sign of compromise before the summer recess.  There is, however, movements afoot to get back to the negotiating table in early September and provide Americans with continued economic aid they need.  We are optimistic both sides can strike a deal to help Americans, especially a few months before major elections.

COVID-19:  August saw lower cases of COVID-19, fewer hospitalizations, and deaths.  We also received news of Abbott Labs’ rolling out at-home rapid COVID-19 testing and Pfizer announcing that results of its COVID-19 vaccine trials will be published in October.  All of this is directionally good news, but there is concern about the direction COVID-19 will take when students across the country head back to school and how we deal with social distancing during the cooler fall and winter months.   We noted last month that daily cases in the U.S. spiked to a new high of around 77,000 per day in July, but we’ve seen improvements in recent weeks.  As of this writing, cases have come down dramatically to about 40,000/day.

SANDY COVE INVESTMENT OUTLOOK & PORTFOLIO POSITIONING:  The volatility we have been talking about for a few months may have started as we write this during the first week of September.  Summer is behind us with the celebration of Labor Day, the “back to school/back to work” mentality tends to kick in, and we look to future events for some direction.  The election rhetoric begins in September and will kick into high gear in coming weeks creating confusing headlines from our 24-hour news media.  With markets attaining new all-time highs in early September, we view the equity market consolidation as a healthy one after extended gains on no real news.

While never fun to experience the downside of volatility, we remind our clients that it’s the uncomfortable part of being invested.  However, if you look at the long-term returns, it has always been worth staying invested.  This chart below is a great visual putting intra-year volatility into context over long time periods. 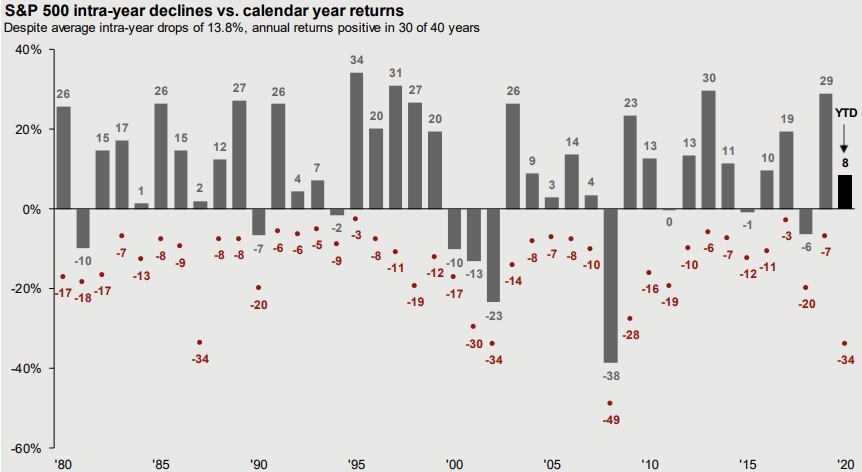