1. Weekly Market Update: Were sending out today’s update a bit early today as I am jetting out on vacation. Suffice to say it has been a fairly volatile week with trade issues again taking center stage. We sold off as the week began and then gained most of it back as the week went on. As I type Friday afternoon, markets are slightly lower. The folks at Bespoke Investments added some levity to this week’s volatility with the intraday chart (below) of the S&P 500.  Over the last week the S&P 500 has amazingly formed a perfect “shrug” pattern from the famous emoji that you’ve likely seen before in texts and social media (especially if you have teenage kids)!  A picture is certainly worth 1,000 words.  Talk about the perfect description of this market! 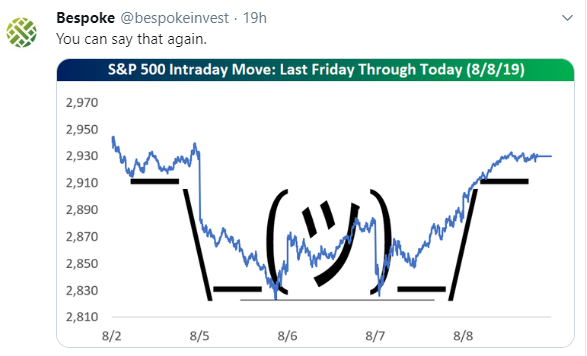 Below we highlight a few of the cross currents and main events affecting the markets this week. On the week, stocks were off 1-2% on average but were rallying Friday. Bonds had a banner week.

2. The Big Story is Still Trade. Won’t it be nice when this issue truly subsides?  Keeping the uncertainty high, today president Trump commented that the scheduled September trade meeting with senior level Chinese officials may not, or may take place. Earlier in the week the US labeled China as a “currency manipulator” as China’s central bank pegged the Yuan at 6.9996 per dollar (just below the psychologically important 7.0 level). This 6.9996 level is the Yuan’s weakest price since 2008. Why is this important? Consumers tend to favor cheaper products and a product denominated in a cheaper currency is just plain cheaper to the consumer. Consumers then tend to favor Chinese products over US products. Less US product sales leads to a slowing US economy. This is a major reason why Trumps is pushing the Fed to lower US rates which in turn will weaken the price of US Dollar.

3. Bonds Had Another Good Week. Interest rates around the globe (and here in the US) are falling given fears of a slowing world economy. US Bonds (Barclays Agg Index) were up .75% this week and are now up close to 8% year to date. The US Fed will have another meeting in mid- September, and option markets are already pricing in a 100% chance of a 25 basis-point rate cut. The bond market, which is a safe haven during volatile periods, has seen its yields tumble and that is sending a very, very strong message to the Fed that they'll want to be extremely accommodative for at least the balance of 2019, something the Fed has yet to acknowledge. The "transparency" that prior Fed Chairs Bernanke and Yellen fought so hard to develop is currently MIA with this Fed. Therefore the stock market has not been happy lately.

4. Sentiment is Bad, So That’s Good?!  When things look grim, taking a look at sentiment readings is helpful to spot turns. This week, the American Association of Individual Investors (AAII) sentiment survey showed the 4th largest one week jump in bearish sentiment (48.2% of investors are bearish) in the history of the data going back to 1987. Bullish sentiment also fell considerably. This is a contrary indicator, so this is actually positive news. Regular readers know that we also like to follow the “Fear & Greed” index for signs of market turns as well. This index hit “Extreme Fear” at the beginning of the week, another sign that selling could be ebbing. Other sentiment gauges like the Volatility Xndex (VIX) and the CBOE Put/Call ratio also hit extreme/oversold levels this week. 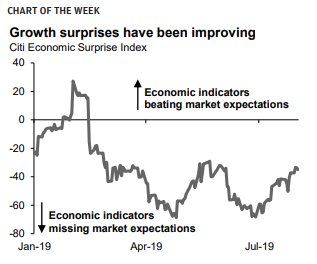 Positive Economic Signs from the Citi Economic Surprise Index. This Index looks at economic data relative to consensus expectations. The index rises when economic data exceed consensus estimates, and falls when data are below estimates. The chart highlights that the economic data were better than expected in recent weeks and confirms that the U.S. economy should continue to grow at a moderate pace in the near term.

• How the Beyond Meat Sausage Is Made (Bloomberg Businessweek) - Toni

• The Age of Envy: How to be Happy When Everyone Else’s Life Looks Perfect (The Guardian) - Suellen

• How Does Tom Brady Do It? It starts with science and ends with something less precise. (Washington Post) - Deirdre

• How to Change Your Money Mindset Next Year, According to Science (Chime) – Courtney,  Katie

• 6 Reasons We Make Bad Decisions, and What to Do About Them (Harvard Business Review) - Deirdre