2. This Week’s Positives: Positive data and comments this week centered around trade, corporate earnings, and robust economic reports.  There's a lot of good news out there. Corporate profits, on a pre-tax basis, are growing at their fastest pace in seven years. Consumer confidence is soaring by multiple measures and arguably, U.S. households are just getting warmed up. Household savings were recently revised up and are substantially higher than the pre-crisis period, meaning those same exuberant consumers may have untapped spending power. As the Nasdaq passed the 8,000 level it stole the focus from the equal-weighted S&P 500, which also made a new high, indicating that the average stock is also advancing, not just the largest names. This rally is broad. It’s not all from tax cuts either.  Corporate sales growth figures indicated nice gains this week as well.  The GDP Revision on Wednesday expanded to 4.2% from 4.1%. Expectations were for the revision to go down, the economy is stronger than previously thought.

3. This Week’s Negatives: Negative sentiments and data were focused the rising deficits the strong US Dollar and politics. Once again, you have a lot of people who, for whatever reason, are predisposed to thinking that a downturn is coming. Some think tariffs will cause a recession. Others worry that U.S. capacity is near maxed out and that the timing of the tax cuts was irresponsible. Some just don't like President Trump. Others may just be thinking that the economic expansion is getting long in the tooth.  Others worry about a rise inflation and we did see an increase in a key inflation gauge on Friday as one component of a U Michigan survey indicated that inflation is running at 3%.

4. Not Nafta: After agreeing to a trade deal with Mexico, President Trump initially commented that there would be no wiggle room for the imposed Friday deadline for Canada to come to an agreement as well. By the end of trading on Friday, a deal with Canada was not apparent but the rhetoric had died down and commentators were more hopeful of a deal on the horizon.

5. Chart of the Week: There’s a ton of talk about the huge impact the tax cut has had on corporate earnings but this Bloomberg chart tells a slightly different story: Earnings are the strongest in 7 years, even without the tax cut! 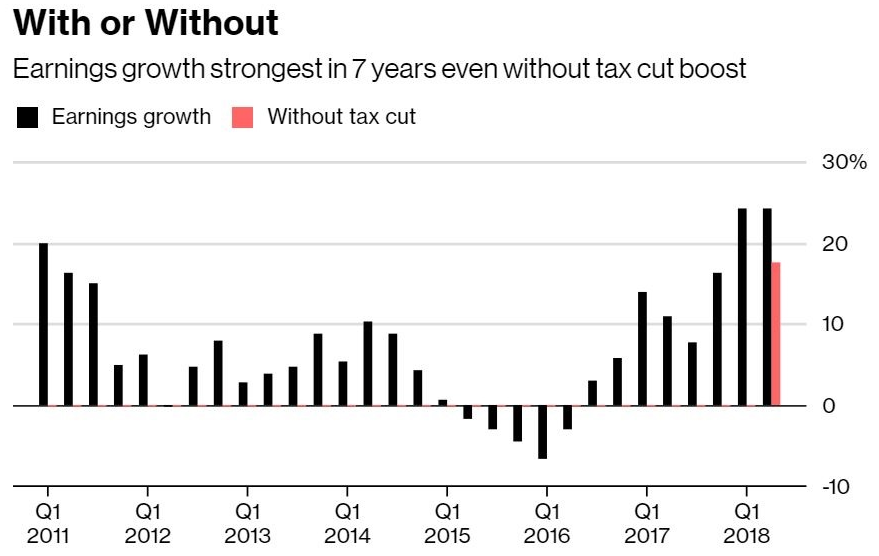 6. Turkey Still in Focus : While many emerging nations suffer from some of the conditions that ail Turkey, no other nation has them all. These problems include a huge budget deficit, the second highest current-account deficit among emerging market nations, huge externally denominated sovereign and corporate debt, profoundly high inflation, an inert central bank, virtually no international friends, and a large need for imported oil. Turkey is by far worst-in-class; fear of contagion is misplaced. - Elliot F. Eisenberg, Ph.D

7. Next Week the Focus on Mid-Term Elections Begins. We are just 67 days away from November’s elections. The incumbent party usually loses seats in the House and Congress.  Markets will react to a big shift and markets hate uncertainty.  Will a sell off arrive? Perhaps, but this stat does provide some comfort:  The 3 months of October-November-December rank 2-3-5 in terms of average monthly performance for the S&P 500 index (i.e., October is 2nd best, November is 3rd best and December is 5th best) over the last 25 years. The 3 months have jointly gained + 5.0% per year (total return) over the last 25 years (1993-2017) or 51% of the index’s total return over the entire 25- year period (source: BTN Research).

What We Are Reading: