2. European economy posts a strong report. European growth remains robust, with IHS Markit’s composite index of manufacturing and services (PMI) increasing to 54.4 from 54.3 in July. Composite PMI for Germany had its highest reading in six months of 55.7, with the growth driven by a strong increase in services which more than offset a slowdown in manufacturing. France’s economy also showed signs of regaining steam with composite PMI rising to a four month high of 55.1.

3. Staying the US Interest Rate path: The minutes of the most recent Federal Open Market Committee published yesterday showed that policy makers at the bank are willing to raise rates again, so long as the U.S. economy remains healthy. The dollar remains strong as the Fed seems determined to stay the course on its tightening path. Federal Reserve Chairman Jerome Powell spoke at the Fed's annual symposium in Jackson Hole, Wyo Friday. He said he expects further interest rate increases but also acknowledged foreign and domestic risks that could result in different policy.

4. Growth Outlook: Economists forecast that the U.S. economy is set to grow this year at the fastest pace since 2005, with a second-half expansion of 3 percent or more. Despite lagging wages, consumer confidence remains strong as personal finances are in good health, with a savings rate at an average 6.7 percent. The positive outlook for the rest of the year comes with some caveats, chief among them the possible fallout from trade tariffs and how much Fed policy will cool growth. Concerns about the housing market were also raised as the lack of affordable accommodation could become a drag.

5. Trade Off:  Two days of low-level talks failed to yield any progress on the trade standoff between the world’s two largest economies. With Chinese officials raising the possibility of no further discussions with the U.S. before November’s mid-term elections, it seems likely that the tariff war between the countries is now primed to escalate further. Talks between the U.S. and Mexico on reviving Nafta seem set to continue into next week, with Mexican Economy Minister Ildefonso Guajardo saying both sides have yet to resolve all outstanding issues. Canada is set to remain on the sidelines until its southern partners iron out their differences.

6. Chart of the Week: With so many commentators making cautionary comments about the length of this Bull market, Bloomberg posted an interesting chart highlighting the fact that since 2000, this Bull’s valuation has never gotten too stretched. 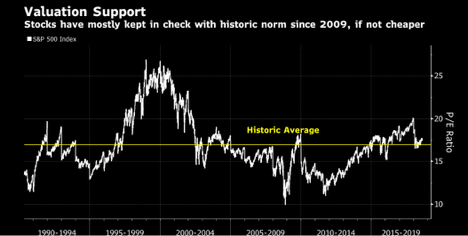 Aretha Franklin Had No Will: The family is trying to protect her legacy… there are unavoidable problems on the horizon because Aretha did not do the proper estate planning. (Forbes)

Will the market crash if Trump is impeached? Here’s what analysts say (Bloomberg)