1. Volatility returned to the markets this week as we saw a break from the summer doldrums. It's been a strong few summer months, the Dow Jones Industrial Average and the S&P 500 have now closed up six of the last seven weeks. Concerns that Turkey’s issues (see below) will spill over into other emerging economies sent us lower by mid-week. Then a rally took told on the promise of trade talks with China coupled with strong economic reports from the European Union and the US.

2. “Blistering” Is the word Bloomberg used to describe the US economy this week.  According to an index that measures the nation’s future economic health, the Leading Economic Index (LEI) rose .6% in July suggesting that the economy will expand around 3% in the second half of 2018. The Nation’s leading retailer, Walmart, confirmed a rosy outlook when they reported robust earnings this week, indicating the US Consumer feels confident. Retail Sales, Productivity and Jobless Claims reports all came in better than expected this week.

3. Troubled Turkey!  With the Turkish Lira down 26% last week and 41% YTD, Turkey's in crisis. The declining Lira has pushed inflation to 16%, short-term interest rates to 23%, and its huge debt, over half of which is foreign-denominated, will be much harder to repay. Turkey's new finance minister, President Erdogan's son-in-law, is utterly unqualified. Turkey desperately needs an IMF bailout to calm markets but will probably impose growth-sapping currency controls instead.

4. Happy Anniversary Bull Market! This Wednesday, August 22nd, this bull market will be 3,453 days old and will become the longest bull market on record, surpassing the 3,452 day old bull market that ran from 10/11/90 to 3/24/00. During this near 10-year period, US equities have returned about 420%. This bull began during the trauma of the Great Recession and many investors (wrongly) believed equities would never recover.  However, some analysts who measure long term secular trends and charts believe this bull market actually began in 2013 and may have a long way to go.

5. Tesla Stock Tumbles After Elon Musk’s Tearful NYT Interview: To Tweet or Not to Tweet….Tesla Inc. plunged Friday after Elon Musk told the New York Times that no one saw or reviewed his tweet about the plan to take the company private before he posted it. The billionaire frequently teared up in an interview and discussed the personal strain of leading the electric-car maker, the newspaper said. The SEC is now investigating the company after this fateful tweet.

6. Good News on Trade: Talks between China and the U.S. set to resume after a two month hiatus. China is set to dispatch Vice Commerce Minister Wang Shouwen to the U.S. later this month for low-level talks. The yuan jumped the most in more than six months on optimism that the move might be a sign of improving relations. Trump is demanding a package of measures that slashes the bilateral trade deficit.

7. Chart of the Week:  Bitcoin: Digital Currencies Are Down 70% from their January High…reflecting user frustration over modest inroads into commerce and a general shakeout in speculative investments 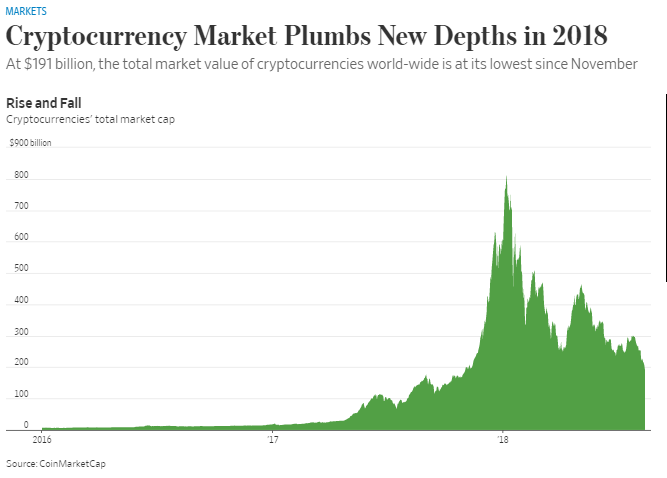